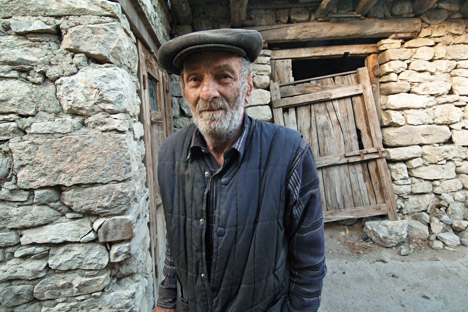 According to the constitution of Dagestan, all of its languages should be treated as official. Only 14 of them have written forms, and it is only these 14 that get official recognition. Source: Sergei Pyatakov / RIA Novosti

Around 250 languages are spoken in Russia, including Russian, which is spoken by some 150 million people. Russian, along with several Turkic-based languages, is doing fine. However, the linguistic situation for many lost tribes and Small Indigenous People in Russia is far more uncertain.

Russia’s many languages are the same kind of impenetrable mystery for the country as the ever-discussed topic of the “Russian soul.” Russian itself is fairly mysterious, considering the time over which it developed.

From the first appearance of prose works that were not mere copies of Western models (Nikolai Karamzin in the late 18th century) to the appearance of the first experimental writings of the 1920s (such as Velimir Khlebnikov), there is only just over a century.

Within that feverishly busy century the works of Tolstoy, Chekhov and many others appeared. Not even America saw that kind of development, even though they had the whole corpus of English literature to start from.

How to say “I love you!” in Russia’s rare languages

The outlook is good for the Russian language – it appears in vast numbers of publications, it is diligently studied, it is taught abroad, and it is continuously developing. A similar situation is found for the languages of Russia’s more numerous ethnic groups – Tatar, Bashkir, Chuvash and Yakut – which all happen to be Turkic-group languages.

Even this last group, Yakut, has more than 1.5 million speakers scattered over one of Russia’s largest regions, Yakutia (1.1 million square miles), and the language is not endangered.

Books come out in Yakut, they teach Yakut in schools and colleges, there is a Yakut-speaking mass media and artistic culture, and it is studied by linguists and ethnologists.

This is all in dramatic contrast to the situation for languages of Russia’s Small Indigenous Peoples (a term recognized in United Nations documentation). In fact, such languages are dying out all over the world, and not only in Russia.

In most cases, the cause is not bureaucratic neglect or chauvinism, but harsh environmental conditions – Russia is no exception.

Russia is a sub-polar country in which huge tracts of land are covered by barely traversable taiga and tundra – like the Amazon jungles, but with the added factor of fierce cold. “Lost tribes” eke out their subsistence in these empty wastelands, from the northern Saami to the southeastern Udegei.

They wage a bitter and not always successful struggle for life, while communicating in their unwritten languages. It is impossible to “bestow” the benefits of urban life upon them: Experience has shown that they have fatally low tolerance levels for disease and alcohol when this has happened.

Another reason why languages die out is the peaceful assimilation of their speakers into populations of the majority-language group.

This has been the fate of some dialects of Karelian. “Karelian” is a collective name used for the Finno-Ugric peoples remaining in the European part of Russia, as well as the term for the descendants of Orthodox inhabitants of what today is Finland, who fled to Russia during religious persecution in the Middle Ages.

According to the Czarist census of 1897, the last Karelians living at Valdai (now a popular lake resort half-way between Moscow and St. Petersburg) registered as Russians, but their dialect had died out even earlier.

Karelians living in the more distant areas of Tver Region and other spaces have kept their language alive until the present, even though they live closer to Moscow than Valdai. It is clear that such factors as television, Internet, and military conscription for national service have exacerbated the language’s demise.

No one knows for certain how many languages are actually spoken in Russia. Census results in 2010 indicated that people themselves said they spoke up to 250 languages.

There are two main reasons for the confusion. The first is financial: While an expedition is mounted to some remote area where the last speakers of a language are said to be living, those last speakers may have moved to using another language, or may possibly have died.

The second is linguistic: Many languages are initially assigned unique status, but are later denoted as dialects, or perhaps vice-versa.

By way of example, we can look at the tiniest ethnic grouping to be identified in the 2010 census – the Kerek of Chukhotka, of whom there are just four people. The last field recordings made of the Kerek language were made in the 1970s, and, in the 2002 census, there were eight people who identified themselves as Kerek.

None of the Kereks alive have a full working knowledge of their language – they know some of its vocabulary, in a passive way only. The Kereks have been almost wholly assimilated by the Chukchi – another Small Indigenous People, amongst whom they live.

However, there are also linguists who would say that Kerek is in fact a dialect of Koryak, which is another minority language with 9,000 speakers (only 2,000 speak it as their first language).

The State attempts to provide for the Small Indigenous Peoples of the North, Siberia and Far East – their young people are given a pass on compulsory national service, while their hunters and fishermen receive tax breaks.

However, there is one region of Russia where speakers of unwritten languages are treated with flagrant scorn – Dagestan, in the North Caucasus.

As long ago as the Middle Ages, Arab philosophers called the Caucasus “a mountain of languages.” Even in this linguistically rich area, Dagestan stands out as a linguistic treasure chest: despite lands which are compact and accessible, more than 50 recognizable languages are spoken there.

According to the constitution of Dagestan, all of its languages should be treated as official. Only 14 of them have written forms (if Russian is counted too), and it is only these 14 that get official recognition.

Those who speak the non-written languages – who might amount to everyone in a village, or at least half a village – are traditionally calculated as being members of one of the more numerous linguistic groups (the Avars being the most numerous). Thus, they do not benefit from the slightest relief from taxes, cultural-fund or other social benefits.

The local authorities may not be carrying out “linguicide” (the purposed extinction of a language without the murder of its people) in the strictest terms. Linguistic scholars from the Dagestan Republic and the rest of Russia carry out research on local languages, publish their findings in academic journals, and attempt to create viable written forms for them.

Nevertheless, it is not difficult to see cold incipient linguicide taking place. One example is that of the Botlikhs. There have been countless meetings and endless petitions in the Botlikh village to recognize the cultural autonomy of Botlikhs and their language belonging to the Andi group of Avar-Andi-Tsez languages of the Nakh-Dagestanian family.

Yet they continue to be classified as Avar speakers, just as they were under Stalin, the Soviet Union's Commissar for Nationality Issues, in the 1920s. The result is that only 200 Botlikhs, out of a population of 6,000, know their own language.

As of January 2013, responsibility for these matters was transferred away from the hands of the local Dagestan authorities and placed under the remit of the Russian central government body responsible for intra-ethnic issues.