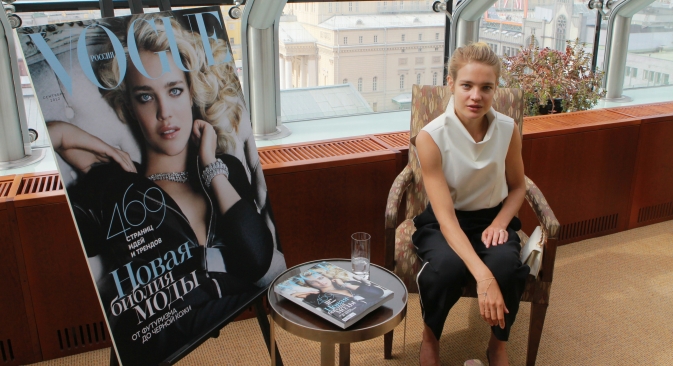 Natalia Vodianova, the Naked Heart Foundation founder, talks to Russky Reporter magazine about modeling as a profession, improving government-NGO relations and what the name of her charity organization has in common with Steve Jobs.

Legendary model Natalia Vodianova is the founder and head of the Naked Heart Foundation, which recently held an international forum in Moscow. In an interview with Russian Reporter, Vodianova shares her opinion about modeling as a profession, improving government-NGO relations and what the name of her charity organization has in common with Steve Jobs.

Vodianova dressed in a deep red – her favorite color – for The Naked Heart Foundation international forum, which was held at the President Hotel in Moscow. Vodianova is both the founder and the president of the foundation. Attendees at the forum discussed how best to help both children with special needs and their parents, as well as children living in closed institutions or with foster parents.

Russian Reporter sat down with the “Lady in Red,” who became a legend as a Russian model and is currently adding to her legacy through philanthropy.

Russian Reporter:Natalia, I hope you won't be offended by my question!

Natalia Vodianova: It’s like water off a duck’s back. Fire away.

RR: OK! So let's say I take a look at the page about you on Wikipedia. We find your height, weight, hair color, and waist and breast size. Other people’s achievements get listed as achievements – the books they wrote, the formulae they proved. Yet they write about you as though you were prize cow. Doesn’t being treated like dairy cattle humiliate your personal individuality?

N.V.: Not a bit. It’s a part of my life; it’s my profession, and I love it. It’s what pays the bills. I’m doing what I love to do, what I want to do, and what I have to do. Directing my unspent energy towards worthwhile causes is my favorite thing.

RR: Actually, a friend and I were discussing whether being a model is actually a profession?

N.V.: I’d say it probably is – more likely yes than no. I remember how I got started: I had no experience and it was awful. I remember how helpless I felt. I knew that I had to use my appearance as a tool, but I didn't know how. I needed some kind of method – like actors have the Stanislavsky method. I realized that models aren’t just coat hangers.

Modeling is a job: It produces results, establishes your image and confirms your individuality. You need to be a shrewd psychologist when dealing with your colleagues, with clients, with the mass media – with everyone. These days, I know that I’m a professional in my field.

RR: Does it get to you when people like Zhirinovsky and his cronies accuse you of self-promotion, when organizing humanitarian aid and psychological assistance for the people of the disaster-hit town of Krymsk?

N.V.: No, things just carry on as usual. I usually try to find some kind of lesson in the criticisms people make, but there was nothing to learn here.

RR:Well, someone must have voted for him. He’s sitting in Parliament, after all.

N.V.: Well, probably. Who knows? I’m not sure. I don’t involve myself in politics – I’m apolitical. I’m sufficiently independent financially to be able to take no interest in politics. You know what I mean?

N.V.: We work independently. Although we know that, for the optimum result, the support of the government and a suitable political climate can be helpful. But we don’t count on it, and we don’t expect it. I’m talking here not on behalf of my own charity foundation, but for many non-profit organizations doing work with children that we support.

On the other hand, regardless of what people may say, the government’s approach to these organizations is improving. The consensus among the public at large and within the business community is that [these organization] perform an essential role, and there’s a desire to help them.

RR:What makes you think so? Sure, many companies are ready to engage in community work, but it’s not worthwhile for them. They’re suffocated by taxes and they don’t have any guarantees that the aid they provide actually reaches the beneficiaries.

N.V.: That’s just pure, unadulterated bias. I guess the only way to improve the situation is by example and by working. It’s like a glacier: if the sun shines, then it keeps melting and melting; and eventually it disappears. Of course you can keep on whining that the aid doesn’t reach the people who need it, blah-blah... But what I can tell you is that our money gets through. Every last penny gets through.

RR: If you took a greater interest in politics, you would have heard that the Kremlin and the KGB suspect nongovernmental organizations of everything – up to and including espionage.

N.V.: I have complete faith in the people we work with. They are 100 percent transparent and offer completely honest accounting processes.

RR: Be that as it may, Russians are used to cynicism when dealing with organizations that claim to be doing good works – particularly charitable foundations. It’s widely believed that they’re laundering money.

N.V.: That’s a stereotype from the 1990s. I’ve never come across that kind of approach myself. Our foundation, for example, spends just 10 percent of its budget on administrative costs. And that’s impressive.

RR:Do bureaucrats on the ground support you?

N.V.: They have no reason not to support us. Do you know how our first program, Play with Purpose, works? A region sends in a request to be included in the program. We never refuse a request, so we have to make a waiting list. After that, we work out a schedule and arrange financing; that is, we decide how much will come from our foundation and how much will come from local budget sources.

From the very outset, this has been a program set up by regional authorities. And it has built children’s playgrounds and parks all over Russia.

From the moment we began in 2004, we’ve built 90 different facilities. These include children’s homes and hospitals, oncology units, and rehabilitation centers, with a geographical spread covering 68 cities in Russia.

Our second project is called Every Child Deserves a Family. You know what it’s about? We step in as a support agency – a protective umbrella. We give financial and administrative aid to professionals in NGOs, to help families with kids who have special, developmental needs.

RR:What did you dream about when you were working at the outdoor market?

N.V.: Kids like me didn’t get to dream. I dropped out of school. We were a family of five, living in a one-room apartment in a Khrushchev-era building. The only furniture was the table and the bed. I didn’t have a dream, but I had a wish – just one, huge wish.

RR:What was it that helped you get through it all? Was it your belief in God, in yourself?

N.V.: I can’t really say what or who it was. Maybe it was a kind of belief; I’m not sure how to explain it... As if, when the very worst happens, you don’t panic, but instead you regard it as a test of your tenacity.

Recently, I was listening to the Internet talk Steve Jobs gave to Stanford graduates after he had been diagnosed with his illness. Do you know what he said? “When we confront the possibility of death every day, and we realize that tomorrow could be our last day, then all our conventions and assumptions lose their significance.

It’s then that our decisions come straight from the heart.” What struck me most was what came next. He said: “You are already naked. There is no reason not to follow your heart.” And my charity is called The Naked Heart Foundation. I’m convinced that there is more in that than just mere coincidence.

The interview is first published in Russian in the Russky Reporter magazine.