University sports leagues to come up in Russia 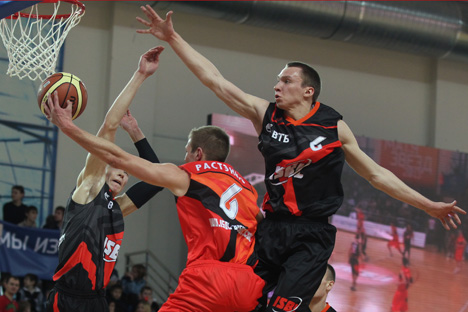 There are several student sports leagues in Russia, including the basketball one. Pictured (L-R): Stanislav Krainov of the Vostock team and Denis Kruglov of the Zapad team during the International Student Basketball League. Source: RIA Novosti / Evg

Developers of the program hope that students will go to stadiums and arenas to support their teams.

University sports in Russia will receive a complete overhaul and move closer to resembling the U.S. model of collegiate leagues. The plan is to establish university sports clubs, to then form student leagues complete with championships at all levels.

The Russian government plans to establish a national system of student sports. The core of the idea is the creation of student leagues that will play in championships at all levels, including national championships. At the top of this pyramid will be the Association of Student Sports Clubs (ASSC). The board of trustees of the student sports movement is already headed by President Vladimir Putin.

Developers of the program hope that students will go to stadiums and arenas to support their teams: The concept aims to result not only in the infrastructure for mass sports, but also in sporting events spectacular enough to attract fans to empty arenas.

There are several student sports leagues in Russia now, including the basketball, soccer and ice-hockey leagues. They have all supported the idea of creating the ASSC.

“Student sports teams will become the main platform for the development of mass sports. The teams will be used to popularize certain sports, raise extra-budgetary funds from sponsors and create fan clubs,” says Sergey Kryukov, executive director of the Association of Student Basketball (ASB).

His organization is a fine example of the way competitions are aiming to be organized under the ASSC. The ASB has around 800 members that represent various universities and colleges; it even has its own all-star game. Kryukov suggests the ASSC set up a pilot project, which will have the same structure that has been tested in the basketball association.

National Student Soccer League president Andrei Stukalov agrees that the creation of the ASSC will help tackle the issue of financing both competitive university sports programs in general, and the teams that are included in those programs in particular. Stukalov admits that the money provided by the Russian Soccer Union is only enough to help arrange some of the events.

“Sports are always loss-making for any university, and a lot depends on the available infrastructure. The main thing is to pay the coaches who are interested in engaging the students. I can’t name the exact budget of a standard university soccer team, but my guess will be 3-4 million rubles annually,” says Stukalov.

There is no clear financing scheme for the new project. It is expected that universities will set up sports clubs using their own funds and engage with managers, who, in turn, will seek additional financing — this is serious money by university standards.

An average regional basketball team has a budget of 300,000 rubles ($10,000). This is how much a team pays for uniforms, transportation, accommodation and meals. The fees paid to the coach and managers are a different expenditure item. Overall, a team can cost a university a couple of million rubles a year.

Additional scholarships may be required for particularly gifted student athletes, who can give the team a boost. Student leagues believe that this sort of motivation is possible, although this money must come from extra-budgetary funds.

“Right now, we are at the complete mercy of university deans," Stukalov told Moskovskie Novosti. "If a dean loves soccer, then the team may get sent to a tournament. If he likes volleyball, we are told that the soccer team has neither a field, nor uniforms, nor money to go to a tournament even in the next town. But the boys are ready to go and play. The ASSC will see to it that sports clubs have state support.”

“I’m 100 percent positive that scouts of many premier league teams will keep an eye on the student championships," Stukalov says. "It has to happen, because they are already ‘combing’ the Chinese student market for talent.”

“We won’t see many changes. We already have soccer, basketball, volleyball, ice hockey, chess, rugby and athletics teams,” Stukalov added. “To have a new team, you need a coach, a place to train and play, and equipment depending on what sort of team you have and the competitions it will participate in. Having your own university uniforms with logos is another important aspect.”