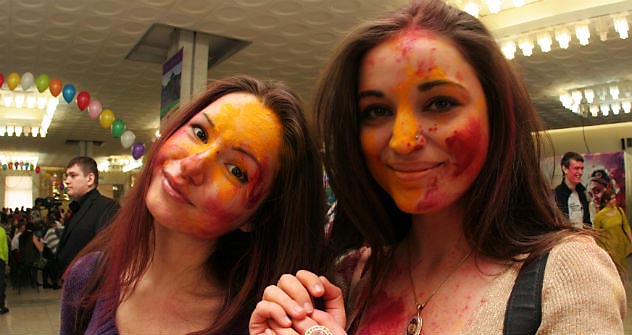 Celebrating their holidays to the fullest is one of the things that Russians and Indians have in common. This year’s Holi celebration in Moscow makes a case in point.

The Indian community in Moscow started paying tribute to the festival of colours, long before the official date of its celebration, March 27. The first celebratory events took place in the beginning of the month creating a stark contrast between snowy Moscow in March and the splendour of colours at the dance contest devoted to the celebration of Holi on March 9 at the Gubkin Cultural Centre.

Now the Indians longing to continue celebrating Holi are looking forward to an event on March 30, which is unofficially the main occasion marking the festival in the Russian capital. The highlight of the event is a dance contest at the House of Culture of the MAI Institute, a new home for the celebration of the festival in Moscow.

Celebrating Holi in the Russian capital is not only a festive occasion, but like anything that involves the small Indian community, it is a chance to get to socialise and network. The event on March 30 is arranged by the Indian Business Alliance and is a good opportunity to discuss important topics in an informal atmosphere.

In just three years, the event has grown with its audience going up from 1,000 to 5,000 visitors and has become an increasingly anticipated event in the city’s festival calendar, among both the Indian and Russian communities.

The get-together will feature Indian music and dance programmes, arts and craft displays, and cultural workshops to go along with Indian food. The main attraction is the rang party where visitors get the opportunity to celebrate Holi the proper way, providing a powerful and visible depiction of equality and acceptance of cultural diversity.

Although some Indians feel that celebrating Holi in Moscow is not quite the same as it is back home, they still perceive the holiday as something special and eagerly wait for it.

Alok Shrivastava, an Indian who has been living in Moscow for a long time, shares his plans for celebrating Holi in Moscow:  “There is a huge difference in the way we celebrate Holi in India and in Russia. In Moscow there are lot of limitations due to differences in civic sensibilities and other limitations...Holi for me has always been an exciting festival which I always look forward to. I will be celebrating with my friends in Moscow. My family lives in India and this year because of professional commitments I will not be able to visit them during this Holi.”

While the magic off Holi in India can’t be replicated in Moscow, the celebrations in the Russian capital serve their true purpose and colourfully herald the spring.