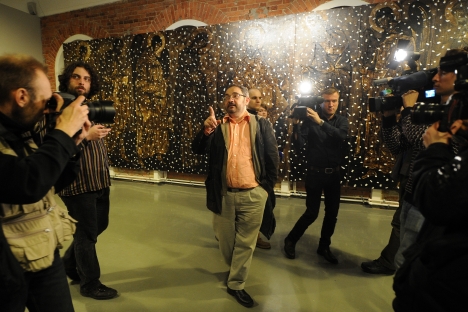 Marat Guelman, curator of the exhibition and director of the PERMM museum, had planned to display Icons in St. Petersburg in November; however, it became possible only now. Source: ITAR-TASS

St. Petersburg-based Creative Space Tkachi – the modern arts center, gallery and café – unveiled the infamous “Icons” exhibition on March 29. Marat Guelman, curator of the exhibition, tells Izvestia that the alliance between the authorities and the fundamentalists has collapsed. The city might now be able to return to the forefront of culture.

The exhibition had a long and complicated way to go before finally making it into a St. Petersburg gallery. Marat Guelman, curator of the exhibition and director of the PERMM museum, had planned to display Icons in St. Petersburg in November; however, the organizers at Rizzordi Art Foundation asked him to postpone the event for a year, citing the unfavorable environment in the city.

Prior to this, in May 2012, there was a major scandal in Krasnodar, where the exhibition was accompanied by rallies of Orthodox communities and fistfights between the local Cossacks and Communists.

The curator remains optimistic and claims that St. Petersburg residents have a chance to get back to the forefront of cultural processes.

Izvestia: In the autumn, you had to cancel “Icons” in St Petersburg. Are you celebrating victory now?

Marat Guelman: The relationship between the Church and art is hundreds of years old. The Church once rejected paintings by Nikolai Ge and Caravaggio. Fundamentalism has prevailed during some epochs, but it has never totally triumphed.

Izvestia: But you can record the turning point, can’t you?

M.G.: It happened quite recently, when obscurantism reached its peak. I mean the beating up of Artyom Suslov, the organizer of the Lolita show. That’s when the St. Petersburg intellectuals, who had remained silent until then, finally spoke out.

As soon as the situation was commented on by Mikhail Piotrovsky, director of the State Hermitage Museum, then Duma deputy Milonov, the unofficial “leader of the reaction,” had to step back. Then the administration of the city realized that, if it supported retrogrades again, it would turn its back on cultural St. Petersburg.

M.G.: Yet I feel changes in the air. It is a crucial time for St. Petersburg, with the alliance of obscurantists and the authorities having finally collapsed. They were unlucky, because “Icons” is not a scandalous exhibition; it is rather a research project, with no items to protest against. The text for the catalogue was written in collaboration with Church leaders.

The exhibition has no aim to change anything in ecclesiastical art; it is just an affirmation. Gosha Ostretsov treats the Gospel as a literary monument for illustration, whereas Dmitry Vrubel interprets the Gospel as recent news: he is a true believer and he reads every line thoroughly, contemplates and selects images from the modern world. Gutov’s recycle group is more interested in the authors of the icons or the Last Supper than the stories.

Izvestia: Many priests have visited the exhibition and appreciated it. Why don’t we hear anything from them?

M.G.: There is a major humanistic section in the Church but, unfortunately, it is not in the mainstream at the moment. There are three categories of priest, in the context of “Icons.”

As for the second group, it only needs to be informed: Russia had no art besides church art before the 16th century and, prior to the 19th century, church and secular art were hand in hand. When the great Mikhail Vrubel painted and decorated churches, he was a progressive artist of his time. You can’t deny a creative person this domain. The Russian icon belongs to the whole world, the way Greek sculpture does.

Tkachi is endeavoring to organize a public dialogue – a roundtable with all concerned parties present. I’m not an organizer, but I’m ready to participate.

Izvestia: Will you invite obscurantists?

M.G.: We should invite everyone, but we should only talk to those who are ready to talk. Obscurantism is not conservatism, it is intolerance. An obscurant is a person who believes that everything that does not fit in his world should be destroyed.

Izvestia: Why are public initiatives aiming to ban things so popular in Russia now?

M.G.: Take newspapers and you will see that the word “modernization” has disappeared from the modern vocab. People used to laugh at it, but those who used this word were always around. This word is nowhere to be seen now.

I see a new signal coming from the authorities – “restitution” – whatever that means. Communists want a return to Stalinism, while Putin wants to revive Stolypin’s reforms, but everyone looks backwards. The main trend today is revival of traditions. But not all of them are worth reviving.

"Icons” will run from March 29 to April 21 at Creative Space Tkachi.