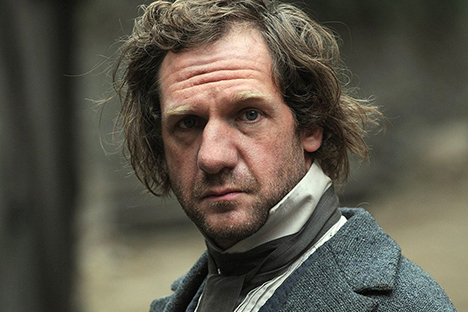 The winners of the 2013 Nika Awards have been announced: Alexander Sokurov’s “Faust” was named Best Film, while Andrei Proshkin’s “Orda” (“The Horde”) walked away with seven trophies – more than any other film.

The Russian Academy of Cinema Arts and Sciences has announced the winners of the 2013 Nika Awards. The ceremony took place at the Moscow Operetta Theatre, amid slightly camouflaged props for the musical “Count Orlov.”

This was to be expected, as “Faust” marked the final part of his four-part series,which had already won the prestigious Golden Lion at the Venice Film Festival. Back home in Russia, it won the White Elephant – the main prize of the Russian Guild of Film Critics; it was, however, passed over for the second cinema academy’s Golden Eagle.

Russia has two competing, chief industry awards – the Nika and the Golden Eagle. The latter is all but fully controlled by the head of the Cinema Fund and the main Russian film director, Nikita Mikhalkov. There is always intrigue over whether a given film will make it into either or both of the nominations.

“Faust” is the final part of Sokurov’s “Moloch” – “Taurus” – “Sun” – “Faust”series. The first three films were about tyrants, while the fourth is loosely based on Goethe’s play about a genius and the devil.

“Faust” and “The Horde” were the main contenders. They earned the most nominations, with Proshkin’s film receiving 11 and Sokurov’s taking eight. “Faust” eventually won four awards – all of them in the main categories.

Sokurov was named Best Director. Yuri Arabov, who won the award for Best Screenplay, had to compete against himself, having also provided the script for “The Horde”.

“With ‘Faust’ I had a powerful co-author – Goethe – and with ‘The Horde’it was hagiography,” Arabov said when he accepted the award.

Arabov also delivered a rather gloomy speech about the future of Russian cinema. “Unless private businesses exempted from all taxes for supporting cinema and the arts rush to our rescue, we will perish.

And you’ll be giving cinematography awards for ‘reverse angles’ in sitcoms, while screenwriters will be queuing up for a chance to write the script for an adaptation of "Count Orlov.”

Anton Adasinsky, who played Mephistopheles in “Faust,” shared the award for Best Actor with Maksim Sukhanov of “The Horde” for his portrayal of Metropolitan Alexius.

Only the young Danila Kozlovsky, who played Roman Prygunov in last year’s box office hit “Soulless”(which surprisingly received just one nomination at Nika), went home empty-handed, though he was also nominated for Best Actor, Kozlovsky had already won the Golden Eagle for the film; winning that and Best Actor at Nika was perhaps expecting a little too much.

“The Horde” ended up with seven statuettes, collecting awards for Best Cinematography (Yuri Raisky), Best Set Design (Sergei Fevralyov), Best Costume Design (Natalya Ivanova) and Best Actress (Roza Khairullina). Khairullina is the actress in the Russian Academic Youth Theatre who played Queen Taidula in the film. The role was a breakthrough for the theatre actress, who played a silent, menacing and bloodthirsty Mongol queen.

“The Horde” is Andrei Proshkin’s period drama about a trip by St. Alexius, the Metropolitan of Moscow and miracle worker of Russia, to the Golden Horde. St. Alexius went to visit the Khan – then the supreme ruler of Russian lands – where he had to bow to the pagans and heal the Khan’s mother from blindness.

One of the most moving parts of the ceremony was the award for Best Supporting Actor, which went to Andrei Panin, who recently died in a tragic accident. Panin earned the award for the role of Fyodor in Alexander Proshkin’s historical drama “Expiation.”The audience rose to their feet to pay respects to the late actor. Alexander Proshkin received the statuette and promised to give it to Panin’s family.

Unfortunately, that was not the only instance where the audience had to rise to commemorate those who had passed on. At the very beginning of the ceremony, the guests remembered Alexey German senior, who died earlier this year. An excerpt from his last, unfinished film,“History of the Arkanar Massacre”(based on the Strugatsky brothers’ novel), was shown.

The latter is a chronicle of last winter’s political protests, shot by a group of graduates from Marina Razbezhkina’s Documentary Cinema Workshop.