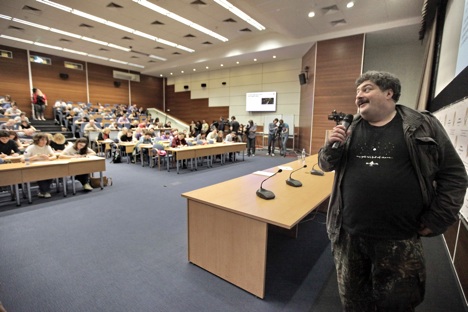 The annual campaign that was held last week offered thousands of people across the globe an opportunity to check their spelling and grammar skills in the Russian language.

The global ‘Total Dictation’ test tasked with promoting literacy among Russian speakers was held for the tenth time. This year, it engrossed unexpectedly keen public attention. To start with, the organisers had not anticipated such a popular response to the Russian language skills test.  In addition, the campaign has occasionally broached some other problems that are of public concern no less than the command of the Russian language.

For starters, the topic offered for the dictation – ‘Is the Internet evil or good’ - was of interest for many.

Secondly, mass media and social networks pondered over whether it was right to entrust an Israeli citizen, even if she is a popular Russian-language writer, to compose the text for such a dictation.

The 2013 Total Dictation campaign drew 30,000 people in 181 cities in 35 countries. Naturally, the bulk of them were Russians. The idea of ‘total dictation’ comes from the Novosibirsk State University in Siberia. The campaign was first held there in 2004 and attracted 150 volunteers. Since then, the event has been gaining popularity, attracting more and more participants each year. The project is geared to “make people think about their literacy and foster interest in improving their language skills.” Its fundamental principles are voluntary and free participation, accessibility and anonymity (each participant is entitled to know his or her own marks only).

This year the text for the dictation was composed by prominent Russian-Israeli writer Dina Rubina, the winner of six literary prizes, a member of the USSR Union of Writers and the international PEN-club, who emigrated to Israel from the former Soviet Union but, nonetheless, enjoys highly popularity among Russian readers. She chose the topic “Whether the Internet is good or evil.”

“For me, the Internet is the third watershed in human history, after the emergence of language and the invention of book printing,” she wrote. “Eventually, a new humankind hierarchy, a new humane civilization is to spring into existence. But so far… so far, the Internet is dominated by the downside of this cosmic breakthrough invention, its disruptiveness. No wonder the Worldwide Web is a tool in the hands of terrorists, hackers and ultras of all shades.”

In keeping with tradition, the text was read out by the author at a venue in Novosibirsk, the birthplace of the campaign.

However, the Russian public was ambivalent about the idea to invite Dima Rubina, a citizen and a resident of Israel, to compose the text for the 2013 Total Dictation.

Thus, one month ahead of the campaign Ulyana Skoibeda, a columnist of a poplar daily newspaper, the Komsomolskaya Pravda, posted a column entitled “Why is Israeli citizen Dina Rubina teaching us the Russian language?” The column stirred up heated debates among the readers.

“If we take the ‘passport principle’ in literary matters too serious, I am afraid Russia will have to throw out a very big heritage, to renounce many authors who have won world fame for it. Such authors include Nabokov, Dovlatov, Khodasevich. More to it, we might start even with Gogol or Turgenev. No time to list others,” Dina Rubina said in an interview with another daily, the Izvestia.

She said she considered this project, born in Novosibirsk, as a “global-scale action.”

“It might be confined to purely national boundaries,” she noted. “Or even it might be shaped as a regional or city-wide action. Like a chess tournament. But to play in a school competition is not the same as to take part in the world championship. The supra-national character of the language action is in line with the colossal civilizational changes taking place across the globe. I think we should be glad to see how widely the language is used, how much interest there is to the language, to literature matters, to writing in the Russian language in the world.”

However not everything went smoothly during the Total Dictation. Thus, while all of Russia was taking down from the dictation of Dina Rubina’s text, participants in the city of Ulyanovsk were writing down the text by journalist Vasily Peskov. It was a decision taken by the local governor, Sergei Morozov, who said he did not like the world-acclaimed writer for the foul language she uses in her works.

Organisers have apologized for Morozov’s representation. Olga Rebkovets, the Total Dictation project head, said acting this way the regional leader had demonstrated lack of respect to one of the Total Dictation’s basic principles - that of the uniformity of the text.

Learning Russian by solving a mystery

The Russian Picture Dictionary: Change in relationship after marriage

She said the governor’s reasons were not weighty enough. “If we are guided by such criteria, we will have to ban public reciting of texts by the majority of Russian classic writers,” she said and stressed that the project organizers guaranteed that the texts composed for the Total Dictation had no elements of slang or obscenities.

In general, the event was a success. In Moscow alone, about 4,000 people took part in the action that was held at 11 venues, all were full. Some even had to take dictation seated on the floor.

“The enormous popularity of the dictation means that there is public demand for literacy,” the Novye Izvestia newspaper cites Oleg Sergeyev of the All-Russia Education Fund. Moreover, he believes that it would be right to check the language skills of Russian officials, “illiterate and ignorant,” as he put it. “So far, the country’s top officials prefer to lend a deaf ear to people’s demand for literacy,” he said.

Back in 2001, Rossiyskaya Gazeta came out with an initiative of a Popular Dictation to be taken by top-ranking officials and politicians, along with general public. The initiative was backed by the Pushkin Institute of the Russian Language. Journalists from the Rossiyskaya Gazeta were the first to undergo the test. They were to write down two fragments from Leo Tolstoy’s works. The grades included two C-marks, one A-mark, and seven B-marks. In other words, the mean grade was something like a B-minus.

Notably, no reports followed about state officials taking part in such campaigns.