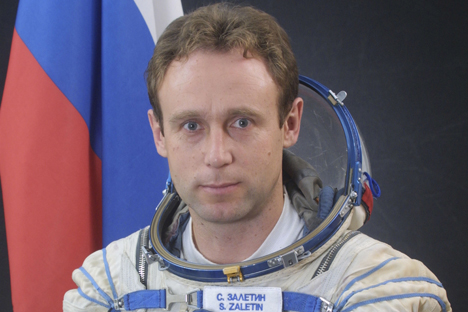 Sergei Zaletin: "Every second in space is a matter of life and death to us." Source: ESA

Test cosmonaut and commander of 2 space crews Sergei Zaletin, who has been to two orbital stations: Mir and the ISS, talks to RIR about life in orbit, perfect cosmonauts and nail-biting experiences.

Russia & India Report: Today, you may safely say that space is your second home but, 20 years ago, you were only starting to learn the ropes. Are today’s requirements on test-cosmonauts much different from what they were back then?

Sergei Zaletin: It has never been easy to become a space crew member. You need to have a diploma in an aviation or aerospace discipline, as well as five years’ work experience in a relevant area. A prospective cosmonaut should be 150 to 190 cm tall (previously, the maximum was 170 cm) and occupy an area of 80-90 cm in a sitting position. Special emphasis is placed on creative activities, perception and learning faculties, professional motivation and a knowledge of culture and history of cosmonautics. Psychologists even study the candidate’s character, family background, work experience and criminal record.

RIR: Cosmonauts are subject to an upper age limit of 32 years. How can one’s ability be determined by age?

S.Z.: There are all sorts of situations. You may join a crew at 25: after graduating and working at least 3 years in the field, you are entitled to apply on general conditions. You may become a cosmonaut at the age of 40, like Mikhail Korniyenko, and celebrate your fiftieth birthday in space. You may even work in space when you’re 60, as is the case with Pavel Vinogradov today.

RIR: Are you saying that space adaptation and post-flight recovery periods don’t depend on age?

S.Z.: Age is not the only consideration: much depends on physical condition and the programme implemented in space. Every cosmonaut’s daily routine includes 2-3 hours of training on special machines. Otherwise, they might lose their ability to walk, lift weights and move their limbs. As for recovery on Earth, it takes exactly as much time as has been spent in space.

RIR: Is this a trend: to send older cosmonauts into space instead of making way for a younger and faster recovering generation of spacemen?

S.Z.: When space exploration was in its infancy, cosmonauts were sent on missions right after graduating, as there was no-one else to fill in for them and no previous experience of this kind. Today’s graduates have to wait 10 to 15 years for such a chance. Every cyclogramme – a mission with pre-determined objectives and a list of crew members – is staffed long before the launch date. Task implementation steps need to be rehearsed over and over again and medical, psychological and technical tests are performed regularly. The new generation finds it difficult to fit in these cyclogrammes, so they have to wait for the next recruiting opportunities, while continuing their studies in the meantime.

RIR: Could it be that the older generation is simply afraid to lose their place in the sun?

S.Z.: We are cosmonauts and we don’t make any decisions ourselves. There are special commissions that profile people for missions. The old school is renowned and praised for its extensive space operations experience. In five years, we will step down and young people will take our place – and, at 35-40 years of age, they will be fully prepared for space missions of any complexity.

RIR: In both space flights, you were the captain of the crew. What were your duties?

S.Z.: (bangs his fist on the table and laughs) I was in charge of monitoring the crew’s safety, as well as implementation of our flight programme in strict accordance with the plan. In most cases, we have a list of tasks broken down by the second. If some event doesn’t take place as scheduled, we wait for a certain number of seconds and then switch to an alternative operating mode. You see, every second is a matter of life and death to us.

RIR: That is something beyond my comprehension. Isn’t the automatic equipment supposed to help you in such cases?

S.Z.: The concept used in Russia prescribes that we allow the machinery to work automatically as long as all operating parametres remain within safe limits. As soon as automatic controls start experiencing major overloads, the crew should switch to manual mode. Most critical for any cosmonaut is the ability to distribute his attention effectively. On our first mission, the docking mechanism failed and we had to dock to Mir manually.

RIR: That is a tough proficiency test. Were you really disturbed when this happened?

S.Z.: On your first flight, you don’t really understand what’s going on, so you are not afraid. But the more seasoned the cosmonaut, the better he understands the situation at hand and its possible consequences. Emotions become overwhelming as soon as you get inside a rocket and you need to suppress them. I personally prefer to imagine that all this is just another drill.

RIR: And this helps you cope with the fear?

S.Z.: No cosmonaut is ever free of fear. Every one of us knows that the scariest moment is when the fourth stage falls off the carrier at the 525th second into the flight and g-force gives place to zero gravity.

RIR: It must be even more challenging to work in outer space…

S.Z.: Physically, it is the hardest part. Working in a spacesuit requires certain skills, such as additional force needs to be applied to move your arms and wrists. As a consequence, several days of recovery are needed when you get back to Earth, owing to muscle overload.

These sensations are somewhat reminiscent of the adaptation period, which takes place at the station. Cosmonauts are advised against moving too much during the first couple of days in zero gravity, as movements within the spacecraft and frequent window gazing throw the vestibular system off-balance. Even so, the adaptation period is calculated for each person individually, as it is important to know when a given cosmonaut will be able to get down to work without any excessive stress. For example, Yuri Malenchenko, who has been on five space missions, is allowed to start working as soon as he unfastens his safety belt after docking (Yuri Malenchenko, present in the room, starts laughing and nods his approval).

RIR: Does a space crew ever deviate from the flight plan?

S.Z.: We rehearse all our actions dozens, if not hundreds of times with the help of training machines. Yet being on Earth is one thing (the cosmonaut moves a mobile phone from one place to another) and being in space is another. First, you have to glue a hook fastener to the phone, then attach loops to the deck and, finally, put the phone under a special rubber unit that prevents it from flying. If you do something wrong or miss one of the steps, the item will fly to some other place the instant you look away. It usually takes an hour to complete such an experiment on Earth, whereas in space double the time is needed. There is another problem: the scientific equipment on the station is passed between crews.

RIR: What’s wrong with that? Doesn’t the rocket have to carry a lighter load as a result?

S.Z.: Picture this: you go to your neighbour’s place and she tells you where she keeps things in her kitchen, as well as how to open and turn the appliances on. Don’t you think you’ll have a lot of questions that she may never have thought of?

Well, space is just like this kitchen. Cosmonauts from other crews almost always forget where they have really put the things you need. In this case, we have to address this issue to the Earth, where no-one has the slightest idea either. So, such forgetful cosmonauts are then caught off guard, lying on a beach or elsewhere, when they pick up their phone and hear a voice saying: “Hey there, buddy. The ISS people want to know where you’ve put that plug.”

RIR: Have technologies changed much during your career?

S.Z.: Mir is as different from the ISS as the early 1990s are from today. Now we have mobile phones and laptops, as well as faster and better-looking cars. When I was on Mir, it had been in operation for 14 years. That is a long time for a space station. The ISS is bigger and more powerful. Its control console is more convenient to use and tasks are assigned to different laptops (there are between 10 and 20 of them on the station). They look like their counterparts on Earth but have been upgraded to deal with specific tasks. A conventional computer becomes obsolete in five years, whereas these devices need to be modernised every 18 to 24 months. The distribution of tasks between these laptops helps reduce the control centre’s memory load. Even so, the ISS is no longer able to keep up with technological developments and will be decommissioned in a few years.

RIR: Do you plan to take part in any new space missions?

S.Z.: Yes. Earlier, I put my space career on hold to be able to participate in the work of the Tula Region’s Duma. Now that I have successfully passed the key medical examinations, I am ready for new flights and I know I’m still going strong. Most likely, I will go into space with a group of space tourists in 2016.

RIR: Will you assume the role of a space guide then?

S.Z.: Whatever space tourists would want to do, it’s none of my business. I’ll have my own assignments and experiments. I am a spacecraft commander: that is precisely who I am.