Beyond the tip of the iceberg: Moscow architecture revealed 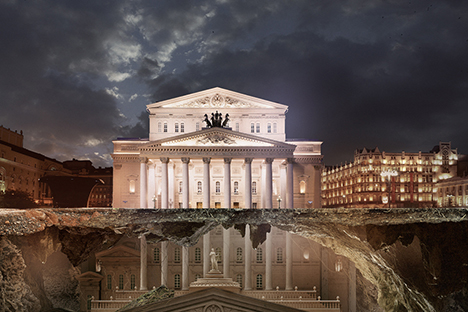 The "Discover the full story" ad campaign, recently released by the Saatchi & Saatchi agency for the Shchusev State Museum of Architecture, gained world-wide recognition after the posters went viral on the internet.

Saatchi & Saatchi agency have created an ad campaign and advertising for the Shchusev State Museum of Architecture that will soon be launched on Moscow’s streets. Posters that were recently leaked on the Internet invite Moscow residents and tourists to discover the history of Russian architecture.

The posters went viral on social networks almost as soon as they became public. People were very much taken with them. “It’s as if the ad were saying: we are better than we seem.”

Meanwhile, the campaign has not even started yet: Saatchi & Saatchi just posted the designs on its artwork website behance.

Over the course of one weekend, the posters became the most popular piece of art on the site, massively forwarded and shared on social networks on the Russian Internet.

This time around, they set out to advertise a museum in a bid to contribute to the promotion of art and the transformation of Moscow, running a totally free campaign.

The designs created by Carioca Studio will soon appear in newspapers and magazines, outdoor advertising boards and in metro trains.

The posters feature three of the most prominent sights in Moscow: the main building of the Lomonosov Moscow State University, St. Basil’s Cathedral and the Bolshoi Theatre.

They are depicted as icebergs, suggesting that the all too well-known facades are no more than “the tip of the iceberg,” with clandestine, unheard-of structures, balustrades and stairways going down deep underground.

The ads invite Muscovites and tourists to the museum to “discover the full story” of Russian architecture, luring them with the secrets and unique stories that are behind the famous facades; all of it can be unraveled in this museum in the center of the metropolis.

Shannon Cullum, CEO of Saatchi & Saatchi Russia, said: "The idea of an Architecture Museum is unique in itself, in that great architecture is all around us everyday and can be seen for free - the whole of Moscow is one big Museum of Architecture in that sense.

The 'iceberg' metaphor delivers this message nicely and in a way that visually involving and memorable."

The posters are only part of the social project – an ad campaign that will officially kick off in May 2013.

The campaign seeks to create public awareness of the museum and lend prominence to centuries of Russia’s architectural history. It focuses on the well-known symbols of Moscow whose stories are easily obtainable.

Although the Shchusev State Museum of Architecture does not have a permanent exposition due to a lack of financing, it offers lectures and exhibitions.

Traditionally, the museum has more of a reputation among professionals, and the administration aims to use the campaign to seek the attention of the general public.

“So the task we set for Saatchi & Saatchi was to show people that the museum had quite a few important and interesting facts for everyone. I thought the audacious idea for the ad proposed by Saatchi & Saatchi could work – and in fact, it’s working already!”

“We wanted to speak with a mainstream audience – with those, who do not generally go to museum – not with [the] art community.

Our advertisement was created mostly for Russians. However, Internet gives a potential for an English version of the campaign. Foreigners are interested in secret Russian passion,” said Cullum.

The State Museum of Architecture is now almost 80 years old. It is located in the center of Moscow on Vozdvizhenka Street.

Its collection counts roughly a million depository items. The museum owes its name to Aleksei Shchusev, a famous Soviet architect whose works include Moscow’s Kazansky Railway Station and the Lenin Mausoleum.