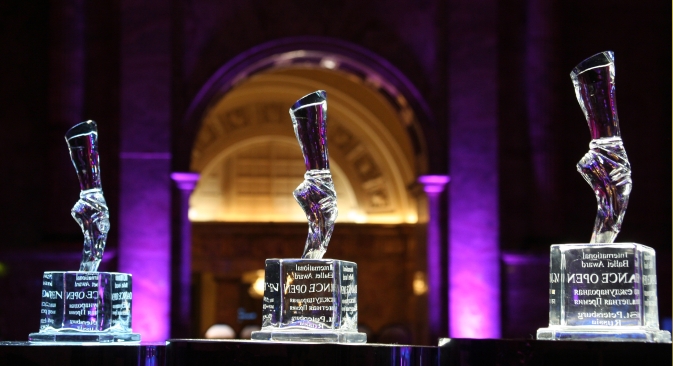 The Dance Open International Ballet Festival is one of the major events of the world ballet season. Source: PressPhoto

For the 12th time, the Dance Open International Ballet Festival is scheduled to take place in St. Petersburg on April 18-22. Offering a program of amazing versatility of styles and techniques, it will star a great number of top-notch ballet dancers.

The Dance Open International Ballet Festival has already earned a worldwide reputation in previous years: In 2011, U.K. newspaper The Independentlisted Dance Open among the top 10 festivals.

This time, the festival is planned on a larger scale and in a somewhat different format. For the first time since its inception, it will not only feature concert performances but also performances by three top ballet companies.

Dance Open is also concerned with the future of ballet. Students of ballet from all over the world – from the U.S., Brazil, Panama, France, Belgium, Poland, Latvia, Finland, etc. – are to arrive in St. Petersburg for children’s master-classes.

A contemporary version of Igor Stravinsky’s “The Rite of Spring”is on the Dance Open program to celebrate the 100th anniversary of its premiere.

Ever since its opening night, choreographers throughout the world have been enthralled by this score’s ability to prompt new dance forms. This time, it is a performance choreographed by Edward Clug from the Slovene National Theatre Maribor.

According to Dance Europemagazine, Edward Clug “has achieved the near impossible: a new and meaningful interpretation of Stravinsky's ‘Le Sacre du Printemps’ [‘The Rite of Spring’].”

They are promising lavish stage effects for the world premiere of the ballet: A real waterfall is expected to pour down from the Alexandrinsky Theatre’s fly tower.

The Semperoper company from Dresden will perform the “Spazio-Tempo” (“Space-Time”) ballet to the music of German electroacoustic music duet 48nord. The ballet was created by the young Italian choreographer Jacopo Godani, who is considered a disciple of the great William Forsythe, for whose company he often danced.

The Bolshoi Theatre is also bringing its own one-act ballet – a performance of Prokofiev's “Classical Symphony”by the young San Francisco choreographer Yuri Posokhov.

After its Moscow premiere, Novye Izvestiawrote: “The composer and the choreographer have made a very successful tandem producing a fusion of styles in a light visual packaging, combining Prokofiev's genial mockery of ancient music with Posokhov's gently ironic treatment of the trivialities of the classical ballet.”

On the night of April 21, the Oktyabrsky Concert Hall will host a performance dedicated to the history of Russian ballet.

“We will turn the clock back with some striking photo and video archive materials and an exciting story full of backstage jokes and unknown facts the hosts are prepared to recount,” said Ekaterina Galanova, director of the festival.

The program will open with the Dance of the Animated Frescoes from “The Little HumpbackedHorse.” Although the ballet is almost 150 years old, the Frescoes dance is a rarely performed piece and hardly a commonplace ballet hit.

The iconic ballerina Uliana Lopatkina will flutter across the stage as the Dying Swan from the legendary short ballet set to Saint-Saëns’ music.

An excerpt from George Balanchine's ballet “Who Cares?” (first produced in the United States) is not an illegitimate addition to the program: The great Balanchine, its author, lived and worked in St. Petersburg at the beginning of his career.

The final gala program is packed full of star performances, featuring the best dancers of the day from 20 companies – almost encyclopedic in terms of the choreographers whose works will be performed.

The show will be symbolically opened by the classic, 19th-century, Danish ballet master August Bournonville, with an excerpt from his ballet “The Flower Festival in Genzano.”

The piece will be performed by the Bolshoi Theatre prima ballerina Evgenia Obraztsova and the American ballet dancer who won the gold medal at the New York International Ballet Competition, Joseph Gatti.

This is the night to see excerpts from ballets by Christopher Wheeldon, John Cranko, Roland Petit, David Dawson and John Neumeier – all legends of international choreography. As a surprise for the audience, the program also features a show by Entredos Ballet Español, which will perform a fusion of Spanish folk dances and flamenco.

After the gala performance, the Dance Open awards ceremony will be held in the Marble Hall of the Russian Museum of Ethnography. A jury consisting of renowned international ballet personalities and chaired by the legendary Natalia Makarova will decide the winners in seven categories.

The best dancers and ballerinas will receive the traditional Dance Open prize of a crystal statuette – a replica of the great Russian ballerina Anna Pavlova’s foot.