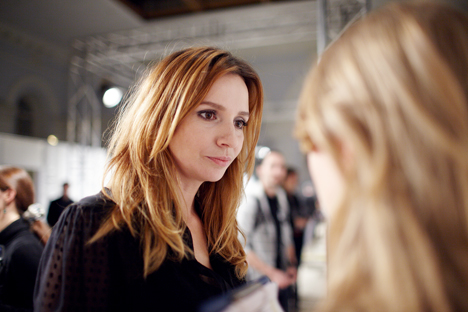 Young Russian designer Olga Vilshenko has proven yet again that the Russian folk style is perfect for the catwalk.

British Elle wrote about her: “Born in the Ural region of Russia, the brand’s designer, Olga Vilshenko, brought her heritage with her to London and applied the crafty techniques and bucolic prints of her childhood to clean, luxe separates with a timeless feel.”

Her aesthetic sensitivity and taste were a gift from her parents – she was encouraged to pursue her passion by her mother. In addition, her music and dancing classes account for her love for all manifestations of art and her strong cultural background.

Yet the decision to dedicate her life to design was not an obvious one. Vilshenko graduated from the Chelyabinsk Institute of Finance and went to continue her education in London, where she finally made up her mind to take up design as a career.

The idea of starting her own label also came to Vilshenko in London. Later, the idea was supported by fashion stylist Sarah Richardson, who became interested in the idea of revising the concept of Russian folk costume that underlies Olga’s trademark style.

The young designer managed to find her own style without working as a trainee for fashion houses and experimenting with well-known styles. The Vilshenko label appeared in 2009, and Olga’s first collection was presented in the summer of 2010.

The harmonious combination of modern cuts and traditional prints helped her create a successful business concept in the contemporary era of feminine silhouettes and trends for revisiting the ethnic theme. Choice of materials also became part of the brand’s philosophy.

Olga is proud of being associated with her cultural heritage and traditions. She has introduced this concept into her creative work, bringing elements of Russian folk costume into modern garments.

“I am Russian, and I try to represent my country in the clothes that I make; I want to show that the rich traditions of Russian costume fit perfectly into the contemporary context,” says Olga.

“However, finding the golden median between commercial projects and creative work is a great challenge for a designer. To create a commercially successful project without losing your identity is always hard. You need to find a balance between the expectations of potential customers and your own vision,” the designer says.

Olga has to split her life between Russia and the UK for work; the factories are also based in the two cities of Moscow and London. Vilshenko clothes can be found anywhere in the world – in Florence, London, Palm Beach, Beijing, Shanghai, Kuwait City and even Jeddah, Saudi Arabia.

Mercedes-Benz Fashion Week is about to kick-off in Moscow. Source: YouTube

“She fascinated us with her folk motifs and original presentation of Russian themes. The cuts of her clothes and her silhouettes are flawless.”

Vilshenko has presented five collections so far, and all of them have been very well received by fashion critics. “Vilshenko, the label of designer Olga Vilshenko, is a unique brand that combines elements of Russian culture and western heritage,” Cosmopolitan Russia wrote about Olga’s products.

Clothes by a free spirit, tied to history

Her new fall/winter 2013-2014 collection has surprised her fans, as Olga has, for the first time, given up on her trademark, traditional Russian motifs. Dominating the collection are light, translucent fabrics, exquisite combinations of colors and elegant silhouettes that seem ready to fly away.

The collection was inspired by paintings by Filipp Malyavin, who focuses on Russian costume and ethnic flavor. This time, the Russian motifs were expressed in Olga’s works in a totally different way; her traditional prints and patterns were revised toward an elegant eclectic style.

Olga believes that Russian fashion has developed a clear image over the last few years, acquiring its own unique face; however, she believes it would be unfair to single out individuals, because a whole team of talented people should be given the credit.

Russian designers are not trying to build on the trends that have already retired from the scene in Europe and America, but, instead, they are taking on bold experiments.

They are coming up with original models that represent the synergy of Western laconicism and Russian cultural heritage, which emerged at the junction of two essentially different civilizations.

These positive changes are taking place largely because fashion is no longer associated with extravagance and has become synonymous with art.

A year ago, Olga did not believe it would be possible to put on a show in Moscow, because there were so many organizational difficulties.

Thus, she limited herself to private shows in London. Her MBFW debut was the first event held in Russia in the history of her label, and it showed that talented Russian designers are welcome and valued at home.