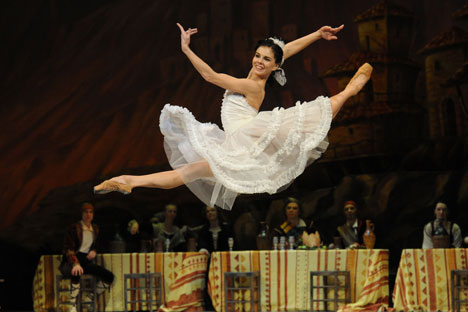 The Mikhailovsky Theatre's soloist Natalia Osipova is to become the principal dancer of the Royal Ballet in Covent Garden.

Natalia Osipova, who will turn 27 in May, is close to the mid-point of her career after nine years on the stage. But the public and critics still regard her as something of a wild young girl. The ballerina, who has danced on many of the world’s most famous stages (including the Bolshoi, the Paris Opera and La Scala), is nothing like a diva: she doesn’t glide elegantly across the stage, but cuts through the air like a fighter plane.

Osipova’s showpiece move is a leap: she leaps high in the air, recklessly, as if overcoming all obstacles. The ballerina’s main quality is her dynamic and captivating temperament: when Osipova dances the role of the Spanish peasant girl in Laurencia and leads the people in an attack on the feudal castle, the feudal lords of today are ready to jump out of their seats and run after her.

Performing Kitri in Don Quixote ballet at the stage of in Mikhailovsky Theater in St. Petersburg. Source: Youtube

She started out as a gymnast: when she was five years old her parents enrolled her in a sports club. But a couple of years later an injury brought her gymnastic career to an end. Acting on medical advice, her mother took her to dance classes initially just to help her recover. But the young Osipova did nothing by halves and was soon perfecting complex steps. The Moscow State Academy of Choreography gave her an unconditional place.

At the Academy Osipova was taught by the rector, Marina Leonova. The rector wanted to show off her student, and in the final year she sidelined all the other students and focused the whole graduation performance on Osipova, with the young dancer appearing as the white swan in one section and the black swan in another. It would have been difficult to think of a worse present: while the black swan made an impression through the natural energy of the dancer, the white swan – which was supposed to be slow, smooth and suffering – moved in a strange, jagged, twitching way, which drew puzzled whispers from the audience.

Osipova displayed her impulsive and triumphant energy which would soon make her a star – but she didn’t fit the “white” role, the main role in Russian ballet. The reviews that followed were scathing and might have been a setback for a less resilient debutante, but Osipova gritted her teeth and carried on.

She was lucky: at that time the head of the Bolshoi Ballet, choreographer Alexei Ratmansky, immediately saw her as “his” dancer. Osipova was an excellent fit for his comic production of The Limpid Stream (which later transferred to American Ballet Theatre). Here her heroine, disguised as a boy, meets a woman the wrong side of thirty on holiday in the countryside and sets her head spinning. She had the same success in the emotionally charged Flames of Paris, where the French Revolution is raging and a column of rebellious peasants is marching on Paris.

Even the very old and highly classical La Sylphide, which Johan Kobborg updated at the Bolshoi, was a hymn to destructive freedom: this snow-white evil spirit steals the ring from the young man who is about to be married and entices him away from his earthly bride-to-be purely because it amuses her and because she wants to. It seems right to her – to fly, to laugh, to bewitch the accidental witnesses. And Swanhilde in Coppélia, which is almost as old, is a carefree adventuress: all the young girls in the town want to get into the house of the gloomy clockmaker, out of sheer curiosity, but it is Swanhilde who steals his key and leads the whole group behind her.

Performing with Ivan Vasilyev at the stage of Mikhailovsky theater in St. Petersburg. Source: Youtube

Osipova had many such roles – colourful virtuoso roles of capricious, reckless girls. But as time went by she increasingly wanted to dance the pure, “white” classics too – and this was problematic in the Bolshoi. The problem was that the rights to all the ballets in the classical repertoire belong to Yuri Grigorovich (since it is his versions that are performed), and he decided who got the roles. Osipova was not one of his favourites, simply because Grigorovich prefers a different type of ballerina – lyrical “adagio ballerinas” rather than aggressive “allegro ballerinas”.

When Osipova was not featured in any of the five casts for Sleeping Beauty the year before last, she did an about-turn and left for the Mikhailovsky Theatre in mid-season, together with Ivan Vasilyev, her on-stage and real-life partner, who was also being restricted to heroic roles by the Bolshoi when he wanted to dance classical princes.

By that time Osipova already had a contract with American Ballet Theatre – she was well known in New York and the public there loved her. The move to the Mikhailovsky, where the theatre’s director Vladimir Kekhman was ready to build a repertoire to suit the new stars, also made her touring life easier – at the Bolshoi getting permission to be absent from the theatre always involved long explanations and negotiations, while the Mikhailovsky had two excellent choreographers working at the same time: the “classic” Mikhail Messerer, who revived Vakhtang Chabukiani’s famous ballet Laurencia for the “émigré” couple, and the “neoclassic” Nacho Duato, who immediately offered her the role she had long desired of Aurora in Sleeping Beauty, and devised the role of Juliet for her.

The general director of the Bolshoi Theatre reacted so angrily to the loss of Osipova that he publicly spoke of an “attack on the Bolshoi Theatre by private business”. What he meant was that the multi-millionaire Kekhman was putting his own money into the Mikhailovsky Theatre and allegedly enticing artists with money. This was not strictly true in Osipova's case: she left Moscow for St. Petersburg not for more money but for better roles.

And now she’s moving to London for the same reason: for new roles. There she will also have the opportunity to dance Frederick Ashton’s courtly ballets and Kenneth Macmillan’s ardent melodramas providing new challenges and the promise of new success. At the same time she is not making a complete break with the Mikhailovsky – she promises to appear from time to time in St. Petersburg, and at American Ballet Theatre it seems she will reduce her commitments but not abandon them altogether. She's leading the kind of life she likes – flying, laughing and enchanting her public.