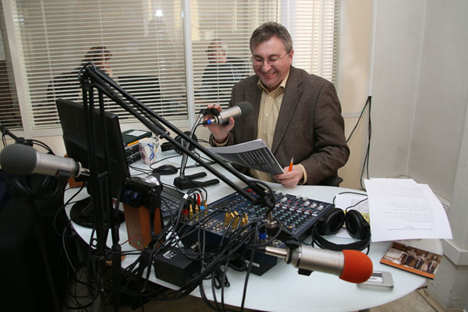 Markus Forster, a German diplomat in Yekaterinburg, once a week works as a DJ for Russia’s only country radio station. He spoke to Rossiyskaya Gazeta about American culture in Russia and how to combine politics and music.

Markus Forster works as a consul at the Consulate General of Germany in Yekaterinburg, Russia; but, once a week, he hops on his bike and rides to the local radio station to host charts.

Forster is a true country music fan, with a collection of more than 3,000 CDs, videos and vinyl records. As a diplomat, he has traveled around the world, promoting country music wherever he finds himself.

RBTH: Country is an unconventional choice for a person born in Germany. I wouldn’t be surprised to hear a program about Tyrolean Yodeling, but why this affection for American music?

Markus Forster: American culture was all around me when I was a boy. I was born and raised in a small Bavarian town, where an American garrison was stationed before the “iron curtain” fell. There were about 2,000 American soldiers and officers in the town of 40,000 [people]. They always had their U.S. Army radio on and had discos.

Yekaterinburg, the heart of the Eurasian continent

Famous country musicians would come every year for German-American friendship parties. I also loved westerns: ­We had them five or six times a week on German television.

My school friends and family didn’t care much for country; they preferred rock. But they all knew that I was not to be disturbed on Saturdays, when the new country chart came out on the radio.

It was a sacred time for me – just me and four hours of the most popular American songs. We had English classes at school, and I understood the lyrics by the time I was 15.

RBTH: What was harder, becoming a DJ or learning Russian?

M.F.: It took me about a year to learn to work with modern equipment and edit soundtracks, but it’s been harder with the language.

My conversational Russian is really good, but the program has time limits. So we don’t broadcast live in Yekaterinburg. Instead, we record the programs. First, I select songs for the chart, find info about the singers, write intros in English; and, then, a translator renders them in Russian.

He is very good at it and has a creative approach; he can deliver poetic translations of song lyrics.

It can take anywhere up 10 hours to get ready for the weekly show. Once we have recorded the show, I start preparing for the next program.

RBTH: What do they have to say about your DJ project in the consulate? It's not typical of a diplomat.

M.F.: (Laughs) They're not really bothered one way or the other. I never tell people what I do during shows. They simply introduce me as Markus Forster. I work for the station in my free time. Professionally, I’m a diplomat, but spiritually, I’m a cowboy.

I don’t get paid for hosting the show. The directors at the radio station offered me money, but I refused. Believe it or not, I’m working for the idea, as a missionary, not for money.

Some go hunting as a hobby, but I sit in front of a computer screen and try to convince people ­ – even a tiny audience ­– that country is excellent music. I’ve been into country music for 32 years now, and I have accumulated enough experience, so I’m ready to share with my listeners.

My dream is to have as much country music on the radio as possible – although 20­-25 percent isn't bad. The average Russian probably wouldn't be able to cope with more.

RBTH: Who are your listeners in Yekaterinburg?

M.F.: I can’t say for sure, because we haven’t been rated yet. The station is quite young: It was founded just over a year ago. My guess would be that we have around 30,000 listeners in Yekaterinburg.

RBTH: Does anyone play country music in Russia?

M.F.: There are bands in Yekaterinburg that play folk, which is close to country. I guess that Russian country is making its first steps, because we don't have much information about this style of music. Our program is a breakthrough.

Also, we hold the Bluegrass in the Ural Mountains Festival in association with the U.S. Consulate on City Day and invite American bands to perform.

Donna Ulisse & The Poor Mountain Boys and the "Veseliy Diligance" band at the Bluegrass in the Ural Mountains Festival in Yekaterinburg. Source: YouTube

A comment by Vladimir Petrovets, general director of the radio station:

We were very lucky. I fell in love with American music when I was five; I play the five-string banjo and other country instruments. And just as we were going to launch this radio station, we happened to meet Markus Forster – a walking encyclopedia of country music.

The Second Festival of Traditional American Music in Russia

The first shows were done live, but we switched to recording them because of Markus' busy schedule. It’s easy for him to hold the attention of his audience for two hours. When Markus came to host the show, we were playing old records and never knew they were too old.

There was a shortage of records. But Markus has been a Country Music Association (CMA) member for 15 years and gets new discs and Billboard issues with fresh ratings every month.

We managed to revamp our format; we know various country categories and genres. Our station keeps up with country trends ­ here in Yekaterinburg; we play the tracks that are popular in the United States. Moreover, we are the only Russian station that is a CMA member.

When we started the project, people told me: “Why? It'll never work. The niche is too narrow.” People only associate this style with westerns and don’t have the slightest idea that half of modern American music is founded on country.

But Yekaterinburg is a forward-minded city, and I had this in mind when I designed the station. Besides, people are tired of pop music. They would love country music in Moscow and St. Petersburg, but they just need to take the chance.

Country is a format that is close to rock, but it’s more melodic. They play natural instruments –violins, acoustic guitars, banjos and harmonicas. There’s lots of cool female singing that you won’t hear anywhere else. That’s why country must be so popular with ladies, unlike pure rock.

Markus Forster's program, The Weekly Country Music Count, can be heard every Friday and Sunday via streaming on the radio station's website.