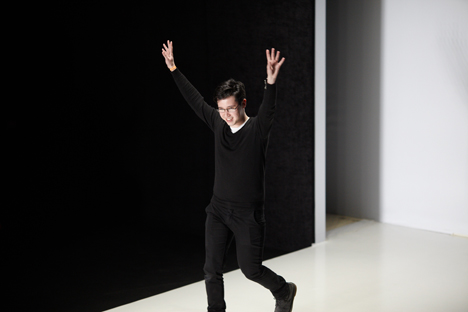 Timur Kim, a 23-year-old designer, left St Petersburg for London, where he made a name for himself in fashion before returning to Russia in an attempt to win the hearts of his fellow countrymen.

Timur Kim may only be 23 years old, but his out-of-the-box and meticulously made prints have already won him the recognition of London’s fashion critics, who praise the simplistic and ironic sides of his artwork.

Timur embarked on a fashion career when he moved from St Petersburg to London and enrolled in the renowned womenswear fashion design courses at Central Saint Martins College of Art and Design at the age of 17.

When fashion house Alexander McQueen accepted Timur for an internship during his first year of study and his diploma collection received awards from Pringle of Scotland and Chloe, it became clear that the young designer had a bright future. “The internship was like a full immersion into the world of art,” recalls Kim on his work at Alexander McQueen.

“I saw how art could be translated into clothes. The work on patterns was very hard but also rewarding. I learned to work with textures, make them come to life the way I want. I investigated how fabrics interact with a woman’s body.”

“We were creating something like a collection of the most iconic and celebrated sweaters ever manufactured by Pringle of Scotland. I used rich pop art colours – intense blue, bright red and green.”

When working on his collections, the St Martin graduate draws inspiration from the legacy of the Soviet era, the Russian avant-garde and decorative elements of the State Hermitage’s ceilings. On 15 February 2013, Timur presented his autumn-winter 2013/2014 collection at London Fashion Week before bringing it to Moscow in April.

The footwear for the show was created in collaboration with United Kingdom’s Oliver Sweeney. “They are currently working on a women’s line and they asked me to make a shoe collection for them. I didn’t want to make heeled shoes – my idea was to create brogues with original prints,” the designer confessed.

“In a month and a half, the new collection will be shipped to all Oliver Sweeney shops. There will also be a men’s accessory line comprising scarfs, handkerchiefs and wallets – all with a caviar print on them [Timur has created a pattern depicting a jar of caviar – N. S.].”

Many fashion fans from the capital have found the collection too faceless and even dull, as Moscow fashion week regulars are used to pompous events showcasing equally colourful outfits.

Yet, it may well be that modesty and laconism are exactly what most Russian fashion designers lack, with their appetite for complex details and elements that sometimes fall out of tune with the general concept.

From this perspective, Timur Kim has all ingredients for success: His clothing is laconic and sophisticated – and most importantly – practical. This, coupled with Timur’s original fabrics and unique prints, is what is currently shaping the new Russian fashion with a Western touch.

What inspired your autumn-winter 2013/2014 collection?

I can’t really say that I have any specific sources of inspiration. I don’t have any particular key ideas. These are just my reflections on how I see a girl, what I’d want her to wear and what I’d want to wear myself if I were a girl.

At times, I use some particular images – like the ones from a Soviet art exhibition held in London’s Saatchi Gallery. In fact, that is how I came up with the idea of a caviar print. At the same time, I wanted to balance out the collection with something radically different.

That is why I also included prints of the decorative elements you can see on the State Hermitage’s ceilings.

Could you describe your perfect client?

It is a young woman who keeps up with fashion, and wants to dress with style and elegance – but who wants to look cool at the same time. She is happy, full of life and self-assured.

Are there any historical fashion tendencies that appeal to you?

Which markets do you think hold most potential for you?

The United Kingdom mainly, then Europe and Russia, followed by an entry to the United States. As of today, Opening Ceremony is showing interest in us, but we’re still at the negotiating stage.

We’ve been exhibiting our collections for only two seasons. I graduated from St Martins only a year ago. Indeed, we are still developing, but I think we’re on the right track.

Today, our clothing is sold in London and St Petersburg, as well as at boutique.ru (a major Russian luxury clothing online shop), which even has my diploma collection in stock. Currently, we’re holding talks with shops in Moscow. The interest shown by boutiques and fashion week invitations give me more confidence. If I am invited to Moscow next year again, I’ll definitely come.

In your view, what does the Russian fashion industry lack?

External connections, I think. Today, everything is changing very quickly, so there is a growing need for communication, idea exchanges and borrowing – or, maybe, sharing.

Mercedes Fashion Week: backstage secrets revealed from Russia Beyond The Headlines on Vimeo.