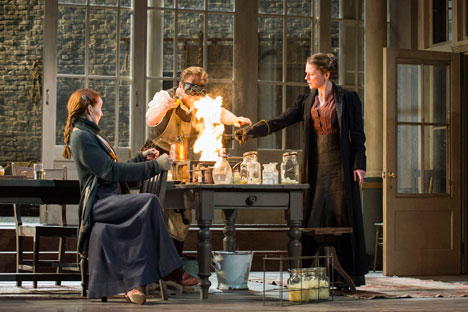 Pitured (L-R): Emma Lowndes performing Liza in the "Children of the Sun" play, Geoffrey Streatfield as Protasov and Lucy Black as Melaniya. Source: Courtesy of the National Theatre

A play in which the privileged are out of touch and the poor are getting poorer is all too apt in contemporary London.

Chemistry is the future according to Maxim Gorky’s obsessive scientist, Pavel Protasov. “Chemistry will unlock the secret chamber,” he tells besotted Melaniya, “and in a hundred years’ time we will be able to create life in a test tube and defeat death with a pipette.” The apparatus of Protasov’s prophetic search for the chemical meaning of life, copper cauldrons and glass flasks, bubble and steam throughout the play, causing panic among the local villagers.

Something else is brewing too in the fast-changing chaos of the early 20th century. The workers are rebelling, the narcissistic intelligentsia only nebulously aware that a new experiment is about to begin. A play in which the privileged are out of touch and the poor are getting poorer is all too apt in contemporary London.

In one scene, frivolous middle class characters throw eggs at each other for fun; next moment a barefoot stranger scrapes the yolks off the table and drinks them. Dripping Cyrillic graffiti on a grey, brick wall at the start refers to “the stink of corruption.”

Gorky is one of those writers most people have heard of  (thanks to Gorky Park), but few have read. He was born Alexei Peshkov in 1868 and adopted the name Gorky, which suggests bitterness or grief in Russian, when he published his first story 20 years later. A committed political activist, he wrote “Children of the Sun” while in prison for protesting against the Tsar. 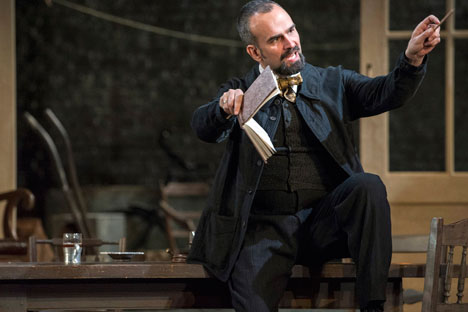 The actor Gerald Kyd performing Vageen in the "Children of the Sun" play. Source: Courtesy of the National Theatre

Russians who studied Gorky’s stolidly Soviet novels and memoirs at school tend to remember him with little fondness, but the new production at the National Theatre reveals that, as a playwright, he can be funny and breathtakingly relevant. Howard Davies and Andrew Upton have collaborated before on Russian drama; previous triumphs include Chekhov’s “Cherry Orchard” and Bulgakov’s “The White Guard.”

Gorky clearly learned some dramatic tricks from Chekhov. Cynthia Marsh, author of “Maxim Gorky: Russian Playwright” notes in a program essay that Gorky and Chekhov were both writing for the Moscow Art Theatre at the same time: “their plays engaged in a dialogue on the stage…” Whereas Chekhov wrote about social change, Gorky was involved in it.

Chekhov died in 1904, while Gorky’s often uneasy, but officially supportive relationship with the communist government continued until his own death in 1936. He would probably be delighted to see this timely resurrection of his work, more than a century after it was written.

“Extremity, complexity, brutality, optimism.” This is how Upton sums up the enduring power of Russian writing and the cast and crew deliver all four. Designer Bunny Christie has created another wonderful set: a light-filled dining room with Protasov’s simmering, windowed laboratory in one corner. 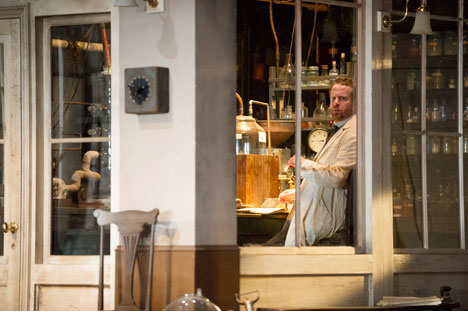 Protasov (Geoffrey Streatfield) looking from his laboratory in the corner of the stage. Source: Courtesy of the National Theatre

Paul Higgins (who also had Russian connections in Channel 4’s recent “Utopia”) has particular immediacy as Boris the lovelorn local vet who hates his sister’s affectations. Old school nanny (Maggie McCarthy) and flirtatious, pseudo-sophisticated maid (Florence Hall) demonstrate the shifting social currents with perfect comic timing. At one point, Boris and Protasov share a scientists’ joke: “How long did the poor lonely atomic have to wait for the bloody periodic table?”

The drama shifts through several changes of tempo without ever losing pace, all the way to its explosive climax. In other hands, this play could have been dated, dreary or fragmented, but the combination of colloquial translation, flawless direction and excellent acting have rescued it from the archives and created fresh and thought-provoking theater.