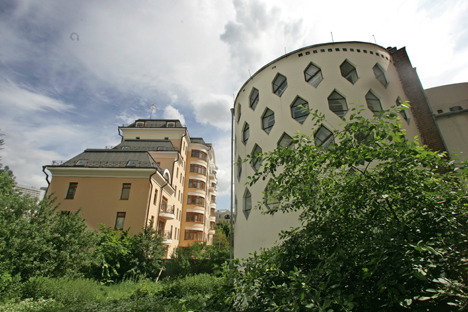 Melnikov's house (R) could be damaged because of building an underground parking close to monument. Source: ITAR-TASS

Yekaterina Karinskaya lives in a white house shaped like a cylinder. Designed by her grandfather, the architect Konstantin Melnikov, it is among the most celebrated buildings of the 20th century.

It is also sinking into the ground.

“The ground should be level here,” said Karinskaya, 71, gesturing to the soil as she stood in slippers outside the front door.

In 1927, Melnikov was at the peak of his career. Two years earlier, he had designed the landmark Soviet pavilion at the Paris Exposition – a striking, angular construction that summarized the ambitions of the new avant-garde. Though building private houses was forbidden at the time, Melnikov received special permission to create a combination studio and dwelling on a side street off the historic Arbat.

The house was supposed to serve as a model for workers’ housing, but the result was completely unique. Its design features two interlocking cylinders studded with dozens of diamond-shaped windows. A spiralling succession of rooms climaxes in an airy studio, which empties out onto a rooftop terrace. Simple wooden battens are the primary source of support, creating a structure that was lightweight and cheap to build.

Upon its completion in 1929, the building was an immediate sensation – but it proved to be Melnikov’s last. With Stalin’s conservative shift in the ’30s, the architect’s experimental designs were suddenly out of favour. In 1937, Melnikov, who was not yet 40, was publicly denounced by hundreds of his colleagues and stripped of his right to teach architecture.

The house became Melnikov’s sanctuary. He spent the rest of his life secluded there, building ovens and taking on the occasional teaching gig until his death in 1974.

“In the world that I served with such passion, I turned out to be unnecessary,” Melnikov wrote in his journals. “I was abruptly shoved out of it. And I probably would have ceased to exist, if not for you – my small, private world.”

Inside, the house is still peaceful. Melnikov’s diamond-shaped windows cast light in patterns across the floor like a magic lantern. The bedroom glows softly from the golden yellow paint on the walls. Melnikov was an enthusiastic proponent of sleep: “If I hear that nutrition is essential for health, I say, ‘no, sleep is essential,’” he wrote. Under his design, the family slept together in one room, on beds low to the floor.

But outside, the sound of cranes and jackhammers can be heard in the distance. Thirty-two meters from the house, just past a group of apple trees, builders are at work on a new multipurpose centre with a three-level underground parking garage. It is this garage that Karinskaya, along with a variety of architectural preservation groups, allege is directing water toward the house, slowly destroying its foundations.

“The foundation is crumbling, there was no research carried out beforehand and no one takes responsibility for anything,” Karinskaya said.

Construction work first began around the house in 1996, when parking garages were dug below neighboring buildings. The company Trust Oil began planning to build a large complex behind the Melnikov house in 2006, but work was halted by a report from the Moscow State University of Civil Engineering warning that it could damage the foundation and cause landslides.

However, work went ahead last summer after an unexpected new report from Mosgorgeotrest (the Moscow City Geological Trust) stated that the Melnikov house was outside the area of impact. To stop the construction, watchdog group Arkhnadzor sent volunteers to stand guard by the work site. Work came to a standstill, but resumed this February.

The soil around the house has already sagged by 30 cm in some places, and cracks riddle its walls. Some say the house is simply aging. But over the past two years, new horizontal cracks have appeared, suggesting a problem with the foundation.

Melnikov constructed the building out of simple bricks and mortar

This month, the International Council on Monuments and Sites (ICOMOS) issued a Heritage Alert warning that the house is under critical threat. The organization, together with DOCOMOMO (the International Committee for Documentation and Conservation of Buildings, Sites and Neighbourhoods of the Modernist Movement) and the International Union of Architects, addressed an open letter to President Vladimir Putin, Prime Minister Dmitry Medvedev and Mayor of Moscow Sergei Sobyanin.

The letter called for an immediate halt to the construction work on the Arbat and the transformation of the Melnikov House into a state museum. Among its signatories were acclaimed modern architects Rem Koolhaas and Fumihiko Maki.

“The issue has been reviewed in the presidential council of the Ministry of Culture, and nothing has gone anywhere,” said ICOMOS vice president Natalia Dushkina. “A government decision from the top is the only hope of putting an end to this disgrace.”

Shadowing the preservation campaign is a bitter family conflict. Since Melnikov’s death in 1974, the house’s primary champion was his son, Viktor. Viktor Melnikov, an artist, dedicated his life to preserving the house. When restoration work in the ’90s left the building vulnerable to intruders, he slept with an axe under his mattress.

Viktor Melnikov died in 2006. Citing his father’s wishes, he left a will calling for the house to be incorporated into a state museum dedicated to both father and son. But after Viktor’s death, Karinskaya’s sister Yelena allied with businessman Sergei Gordeyev to create a private museum in the house.

Half the building is currently owned by the federal government, while the other half is caught up in legal battles between the two parties.

“The question of ownership distracts from the more important issue that the house is falling apart,” Dushkina said. “I don’t care for this expression, but it’s true – it’s a modernist icon.”

Dushkina has pioneered a larger effort to save Moscow’s modernist landmarks. The Narkomfin building, the Shukhov Tower and Melnikov’s Rusakov Workers’ Club are among the Constructivist works currently in critical condition.

Not everyone thinks the buildings are worth saving. In a 2007 interview, Trust Oil general director Andrei Tikhonov called the Melnikov House “an eyesore.”

“That’s the attitude of the city,” Karinskaya said. “If the house is destroyed, great. They can build another multipurpose complex here.”

An engineer by profession, Karinskaya has devoted the past 25 years to defending the house. Her earliest memories are living in the house’s basement after German bombs blew out the windows during World War II.

“When I was younger, it was just my house,” she said. “When I was growing up, kids at school made fun of me and said I was living in a can.”

It was in the late ’80s, when new development began around the Arbat, that she joined her father in trying to protect the house. Since his death, she has been its primary champion. She talks of endless letters written, court battles waged, monitoring that never amounted to anything.

“Sometimes you want to sleep in. You don’t feel like getting up in the morning,” she said. “Now I need to write Putin a letter, and the thought makes me physically ill. I’ve already written hundreds, probably, over all these years.”

Karinskaya lives in the house on a pensioner’s income. Slim and energetic, she ascends the staircases with ease. She points energetically to new cracks that have appeared at the top of the studio walls.

Every few minutes, tourists stop in front of the house to snap photos. Occasionally, the doorbell rings at the gate – a casual caller hoping to come inside.

“I can’t handle all the visitors by myself,” she said. “But if it’s kids, I let them come into the yard.”

Her grandchildren’s plush animal toys are piled in the living room on the second floor, which Konstantin Melnikov adopted as workspace after his son took over the main studio. The house is full of paintings of Melnikov by his son, who shared his father’s erect posture and deepset eyes.

“Someone once asked him who he respected more, his father or God,” Karinskaya said. “He couldn’t choose.”

She dreams of making small improvements to the house, such as replacing the gas stove with an electrical one. But most of the interior is just as it was during her grandfather’s lifetime, including the venerable wooden toilet.

According to Clem Cecil, cofounder of the Moscow Architecture Preservation Society, it is this link between generations that makes preserving the Melnikov house so vital. “There’s a lot of social history in that house,” Cecil said. “There are few places in Moscow that have that kind of continuity.”

Nibbling at a piece of cake, Karinskaya was pessimistic about her prospects for success. “I understand that there’s practically no way that I’ll be able to stop this construction. I’m mentally prepared for this,” she said.

But underneath, the passion inherited from her grandfather and father still burns.

“If the house is ruined, it will be a crime,” she said, showing a visitor out the door.