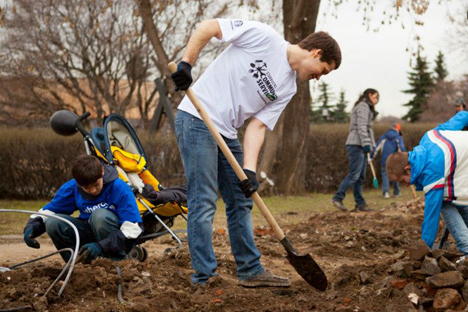 Russia sees a revival of subbotnik or the traditional volunteering efforts to clean up public spaces on Saturdays.

Twenty-year-old student Valentina Volchenkova, who works in one of Moscow’s coffee houses, was one of the 460 volunteers that turned out for the corporate subbotnik in Muzeon Park of Arts on April 20.

Subbotniks, or voluntary labour days organised for cleaning the streets of rubbish on spring weekends, most often on Saturdays (‘Subbota’ means Saturday in Russian), started almost a hundred years ago. They say that the first subbotnik in 1919 was initiated by the Bolshevik leader Vladimir Lenin and was attended by 15 volunteers; one year later, the turnout was 425,000 people.

Back in Soviet times, subbotniks became a mass phenomenon; there were fewer volunteers after the USSR collapsed, but in the past few years, volunteer events to clean public areas have gained popularity. Deputy Mayor of Moscow Pyotr Biryukov said that 1.3 million Moscow residents took part in the April 20 subbotnik.

“Almost everyone wishes to take part, but we can’t close the coffee house for the whole day, so we agreed that some would work today and some would come next week,” Valentina says. The next subbotnik is scheduled for next week in Moscow’s Sokolniki Park. As soon as the snow melts in spring, volunteers clean lawns and paths of rubbish and leaves, paint park benches and plant flowers in flower beds.

“It is great that we decided to work outside with a rake on a Saturday, instead of staying at home. We can have a chinwag and get a bit of fresh air at the same time. And we’re doing something worthwhile to boot,” says Anna Zaychenko, one of the five classmates who came with Valentina to the subbotnik.

The number of volunteers is growing. Two years ago, 60 volunteers came to the park; last year, there were 360.

“It is an indicative example – a network campaign based on Western values, including sustainable development,” says environmental marketing expert Olga Borte. “However, in Russia, even the large Western brands that declare ‘green values’ at home don’t seem eager to join such campaigns. The situation is changing, though.”

Russian companies only organise subbotniks if they want a new type of a teambuilding activity. Organising corporate subbotniks gradually turns into a sustainable business.

“Forward-looking companies eye ‘green’ events as a way of additionally motivating their personnel,” says Roman Sablin, founder of GreenUp, a bureau of environmental solutions and author of the book Green Driver. 24 Hours of Eco-friendly Life. “They are all tired of paintball and clubs. They want some good and creative activity.”

Roman Sablin coordinates environmental events, such as corporate cleaning initiatives and tree planting. Before each event, Roman and his staff provide brief instructions and explain what types of waste products there are and how to separate recyclable waste products – glass, metal and plastic. The rest is packed into separate bags and taken to a dump.

According to Sablin, 40 percent of the waste collected in parks can be recycled. You can make a bicycle out of 400 aluminium cans.

“Many treat these events as a form of entertainment – they spend time together, have a chat. But when they get home, they start separating waste,” Sablin says. “There is an important psychological effect; they are 50 percent less likely to litter in clean than they are in areas that are already full of litter.”

There is a growing interest in environmental protection; however, big companies are not always concerned about the environment because they have too much work.

They can be motivated through environmental outreach initiatives. Sablin normally cites the example of the Great Pacific Garbage Patch. “People are shocked when I show them the slide of a floating island of garbage the size of California and up to 100 metres high, the gyre of debris brought together by currents,” he says. “It looks like a jelly consisting of plastic bags, cigarette ends, bottles and other types of garbage, of which 80 percent is brought from the continent. I tell them that their plastic bottle might end up there in five or ten years if they simply throw it into a rubbish bin.”

Besides corporate subbotniks, there are volunteer events organised by communities of enthusiasts. One such movement, named No More Rubbish, was established in 2004, bringing together activists from one hundred Russian cities and five CIS countries.

“It started in our yard, where street sweepers were cleaning roads, but no one cleaned the children's playground. We wanted to make it clean, cosy and look nice,” says Denis Stark, 35, founder of the movement and bank payment systems consultant.

In September, No More Garbage will once again hold its all-Russian subbotnik as part of the global World Cleanup 2013 initiative. The Russian World Cleanup 2013 season started off with the ‘Clean ice of Baikal’ campaign on 30 March, when 260 volunteers collected 98 bags of waste over an area of three square kilometres.