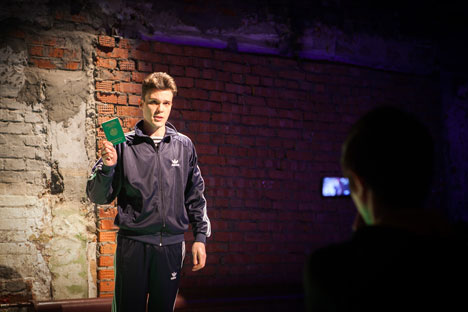 Talgat Batalov’s “The Uzbek” has been nominated for a prestigious Golden Mask Theater Award in the Innovation category. The humorous work raises serious and topical questions about the Soviet Union’s collapse and migration.

Talgat Batalov, a young Tatar actor and theater director from Uzbekistan, is making an impact on Moscow’s theater scene.

Before moving to Moscow, Batalov worked at the Ilkhom Theatre in Uzbekistan – a bastion of liberal thought in an increasingly repressive atmosphere.

Everything changed when Ilkhom director Mark Weil was murdered in 2007. Islamic extremists were convicted of the murder in 2010. Batalov had already made the decision to move to Moscow: he had no illusions about his future as an artist in Tashkent. 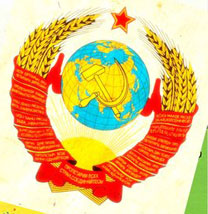 A migrant among many, he settled in a seedy area in the outskirts of Moscow–a part of town even taxi-drivers refused to go - and took a job as a waiter.

“They gave me a name badge that said Tolik [short for Anatoly in Russian] because the cafe boss thought my name was hard to pronounce,” Batalov said in an interview for Bolshoi Gorod magazine.

These days, he is busy with a variety of topical theater projects, and is currently appearing in an edgy, controversial show about the death of lawyer Sergei Magnitsky called “One Hour Eighteen Minutes.”

The highly acclaimed show has evolved since its inception to follow the increasingly international case.

His newest show, “The Uzbek,” is garnering attention and has been nominated for a Golden Mask award. For the first time, Batalov was compelled to talk to the audience about his own life.

He uses his Facebook page to invite friends to come and see the show: “There’s nothing about gay people, not a word about fascists. Nor is there anything about anti-fascists.

Nothing about the United Russia Party, or anything about orphans either. This is just an hour-and-a-half about me.”

The piece is essentially stand-up, and the format is truly apt; he fully utilizes the intimacy and humor of a one-man show to talk about tough subjects.

The result is somewhere between a chronicle of social ills and alternative theater, which could be why  “The Uzbek” is playing both at the Andrei Sakharov Center and at Teatr.doc.

Batalov kicks off with a joke about Uzbeks: “Everyone in Uzbekistan has been to Moscow at least once,” he says, “but not everyone has been to Tashkent.”

The actor then recounts how he got his Russian passport in Tver Region near Moscow. He joined the long line of Uzbeks and Tajiks  – some of them waiting for years for their documents.

He recounts the wild goose chase for all kinds of supporting documentation, how the unhelpful passport center staff spend their time clock-watching – or act like small divinities.

However he did find that the staff helps you along the way if you slip them a box of chocolates. It gets an uneasy laugh. His story is funny but it’s not a joke.

And it’s rare that audiences confront the harsh realities of what migrant workers from the former Soviet countries have to put up with in Russia.

Batalov then plays a taped conversation of a Skype call with his mother. She speaks about how his family is Russian, born in Uzbekistan – which was then part of the Soviet Union.

Then suddenly in the 1990s, it wasn’t their country any longer, and they could no longer travel freely from Tashkent to Moscow. This was the split that gave rise to the illegal immigrants who leave their country behind to cook kebabs in Moscow.

The Russian Federal Migration Service estimates that there were between three and five million illegal immigrants in Russia by the final months of 2012.

Each year, around 10–12 million foreigners visit Russia, and about 70 percent are citizens of the Commonwealth of Independent States –also known as former Soviet republics. 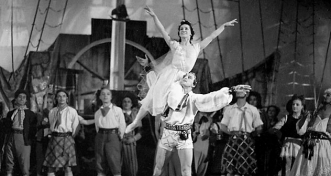 In his interview with Bolshoi Gorod, Batalov said: “I really wish I could speak to those people, who have their heads filled with the strange idea that immigrants are taking away their jobs.”

Talgat Batalov is lucky: he has his own theater show, and is emerging as an actor and director. Back home in Uzbekistan people called him a Russian. Yet in Russia, he suddenly became an Uzbek.

Nowadays, he’s far away from that country, a beautiful, isolated place no longer part of the Soviet Union. Yet Uzbekistan clings to many Soviet characteristics: It has an aged, hard-line ruler; the butt of everyone’s muted jokes.

But nobody knows just how life might go on without him.

During the show, Batalov features a vintage Uzbek cinema clip about World War II, a topic that united Soviet people more than any national border ever could.

By the end, it’s clear that this knockabout stand-up is also tragic and warmly nostalgic. “The Uzbek” pays tribute to migrants — Russians, Uzbeks and Tatars among them — who dreamed of leaving Uzbekistan to earn some money, but dream of going back because it’s their home.