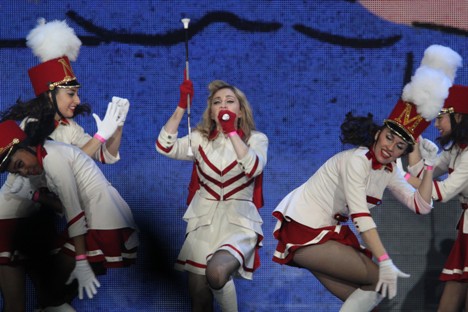 Since Madonna played Moscow and St. Petersburg last August, Russian officials have been squabbling over whether she had the right to be paid for her performances. The controversy involves Madonna’s visa category and terms of employment in Russia, as well as accusations of liability against the Ministry of Culture and the concert organizers.

St. Petersburg legislator Vitaly Milonov, known for his anti-LGBT statements, his sponsorship of the “gay propaganda” bill and his protests against Madonna’s Russia tour, has asked the Foreign Ministry to examine the legality of the singer’s concerts in Russia.

He maintains that the singer and the promoters of her concerts in Moscow and St. Petersburg breached Russian labor laws. Madonna’s visa only entitled her to take part in not-for-profit events.

Milonov has been fighting against Madonna because, as he believes, she “publicly promotes a non-traditional sexual orientation” at her concerts. It is unlikely that his goal is to change the way Russia’s concert and touring market works.

Even so, the problem that came to light as a result of the conflict might still spell the end of the concert promotion industry in Russia.

Most promoters of concerts for international performers in Russia stay in the business until the first conflict with law enforcement. As soon as promoters smell trouble, they go bankrupt – only to start a new company under a different name some time later and do it all over again.

In fact, Russia’s immigration law does not define a “touring performer,” so even the most famous international stars coming to play in Moscow are considered “foreign citizens performing work.” In this sense, Madonna has no more right to be paid in Russia than guest workers from former Soviet republics.

“Companies that work with international performers are legally bound to lose up to half their clients, because, in this case, the cost of concerts increases by 15–20 percent,” said Kirill Chibisov, a music producer and managing partner of the Ru-Concert agency.

“To be able to bring in foreign performers and pay them legally, a work visa and a work permit must be arranged. This is done through the Federal Immigration Service and takes three months, on average, to process. Yet who is going to wait three months for Madonna or Jennifer Lopez if a corporate party is next week?”

Small promotion companies and concert agencies usually send formal invitations to Western performers, which performers then use to obtain regular tourist visas. Obtaining a work visa at a Russian consulate is a task requiring resources that are simply not worth committing for the sake of a single concert.

Meanwhile, receiving a tourist visa is feasible, even if complicated and relatively expensive. However, this means that any international star performing in Russia may be accused of illegal entrepreneurial activity, since tourist visas do not authorize them to take paid employment.

“Employment of foreign citizens in the Russian Federation is governed by Federal Law No. 115. No matter what kind of contract is entered into with a foreign performer – employment, civil, or any other – if income is involved, the performer must get a work permit, while the inviting party must get authorization to employ foreign workers,” said Dmitry Kofanov, CEO of NS Consulting and a lawyer specializing in Russian labor law.

“Since the Ministry of Culture was the inviting party in Madonna’s case, they should bear liability for the U.S. citizen’s illegal income received in our country,” says Sergey Kuroyedov, executive director of the Foundation for Support of Legal Labor Immigration. “The fine for illegal employment now stands at 800,000 rubles [about $25,550].”

The Ministry of Culture’s press service commented as follows:

“Everything that the papers are still saying on this subject concerns foreign citizens who are private individuals coming to Russia to seek employment. Madonna wasn’t such a private individual and nobody signed any contract with her,” said Ildar Bakeyev, president and general producer of Euro Entertainment.

“Even the management of the St. Petersburg branch of the Federal Immigration Service said that a ‘cultural exchange’ visa entitles performers to give concerts, so everything was legal. It’s not only Madonna that comes here in this way; state-sponsored festivals use the same arrangements and performers are paid in exactly the same manner. If the singer had arrived to be employed by our company, it would have been a different matter.”

In the West, touring musicians receive a special category of performer’s visa. There are no such visas under Russian law. If, as a result of the story surrounding Madonna’s illegal concert, the production company that organized her performance is fined after all, Russian audiences might see price hikes for tickets to concerts put on by international stars.