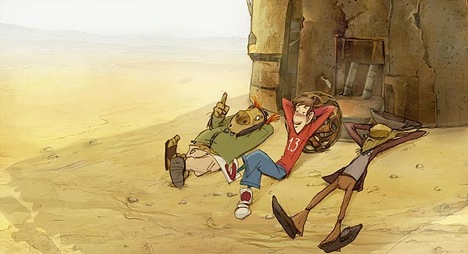 The film "Ku! Kin-dza-dza," an animated remake of the cult fantasy comedy about a rusty society without water, is about to hit Russian screens, but with added racism and servility.

As a result of an unfortunate accident, two earthlings — the great cellist Vladimir Chizhov and his highly deranged nephew, who came to Moscow from Verknie Yamki to learn to be a DJ, end up on the planet Plyuk. The planet is devoid of water and natural resources, but it still has a breathable atmosphere. Therefore, it is populated. Here lives the race of Chatlanians, as well as the Patsaks — sort of guest workers who must wear a bell in the nose. Order is maintained by the Etsiloppes — police who put criminals inside a “life etsikh with nails,” i.e. a box full of nails for life, if they deem it necessary. Everything on the planet is rusty, stinky, and rattly. And it is all governed by Mr Pezhe, who is sincerely loved by all.

Georgi Daneliya is a cult Russian film director and great comedy dramatist, who has shot many classics of Russian cinema: ‘Afonya,’ ‘Walking the Streets of Moscow,’ ‘Mimino,’ ‘Do Not Grieve’ and, of course, ‘Kin-Dza-Dza.’

The latter, a phantasmagorical film shot in the dying days of the Soviet Union, became a true cult at home and even among movie freaks in the West. Originally conceived as an illustration of delirium tremens (so the story goes), it became one of the main political metaphors of perestroika, and words and phrases from the film have since found their way into the Russian language (which is quite surprising really, because the language spoken on Plyuk has just two words: "kyu" — an acceptable swearword in society, and "ku" — all other words).

The rusty, waterless, and merciless world of Plyuk comforted many viewers in the 1990s, while the tyranny of the Etsiloppes caused a few chuckles in the 2000s. The film has kept Russians company for 25 years, and undergone countless reinterpretations.

It was in the 2000s that Daneliya decided to reshoot the movie as animated cartoon, in collaboration with animation director Tatiana Ilina.

The script was simplified with a younger audience in mind, and top artist Alexander Hramtsov was hired to create the characters using sophisticated technology that combined hand-drawn animation with 3D, stylized as a 2D image. However, cartoons are much more difficult to make than conventional cinema. “In feature films, there is more freedom,” Daneliya said in an interview with Seance magazine. “You work directly with the actors and have control over their acting and facial expressions, but in animation there is always an artist between the director and the characters, who takes on the role of mediator. To get a cartoon character to frown instead of raising an eyebrow takes weeks if not months of work. The biggest difficulty was creating the interplay between the characters. For example, a person looks at you, and all of a sudden the eyes twinkle — that's easily done with an actor. But animators think that if the eyes twinkle, then the ears should do such-and-such. But a tiny corner-of-the-mouth smile is all that's needed.”

The film took seven years to make. To begin with, it was funded by the government of the Khanty-Mansiisk Autonomous District, a gas-bearing region in Western Siberia, before the money ran out in 2008. Having disbanded the original team, Daneliya found investment from Channel One, which replaced the producers. As such, the final phase was produced by Channel One general director Konstantin Ernst, renowned producer Sergei Selyanov, and celebrated actor Leonid Yarmolnik. Now the film is finally ready to be released.

It's a beautiful piece of cinema, though very strange. In the original movie, the alien Chatlanians, Patsaks, and terrible Etsiloppes were essentially human, but here they are very different. The hand-drawn rusty booths, which on Plyuk operate as spaceships, do not look as scary as the “real” ones. On the other hand, the cartoon Etsiloppe police officers look inconceivably kind, smiling sorrowfully, which makes it all the more terrible when they commit their heartless misdeeds.

That is not to say that the film is a tragedy or mournful. There are some funny bits and great gags, which kids will probably appreciate more than adults. Children generally find it easier to grasp the absurd. But Daneliya never does “ridiculous” for its own sake.

He has always maintained — before the release of the new film and after the release of the first one — that there are no direct political analogies in either version, and that all coincidences are accidental. Such guile invites us to read between the lines. The planet, on which all resources have been guzzled up, is now home to racial hatred and discrimination, in addition to sincere, universal love for the governor, disturbing musical tastes, and the metaphorical “life etsikh with nails” — a place where we either have been, are now, or shall be.