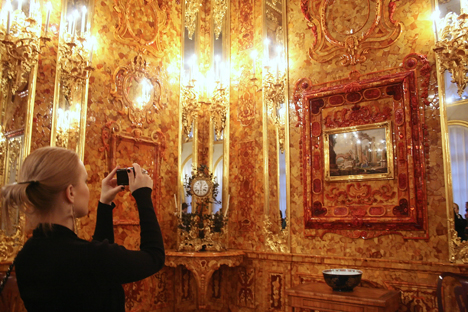 The Amber Room attracts visitors all over the world. Source: ITAR-TASS

A colossal diamond, a golden cap, 15,000 dresses and the Amber Room – these are just a few of the treasure items of Russia’s imperial legacy now displayed the museums of Moscow and St. Petersburg.

Modern Russia has inherited the legacy of both Czarist Russia and the Soviet Union. Over the country’s thousand-year history, it has created, bought and captured innumerable treasures – treasures that are now in grandiose museums.

The largest of these museums is the State Hermitage Museum in St. Petersburg. It is one of the world’s greatest treasure troves of artworks, comparable to the Louvre in Paris. Its collection encompasses priceless old masters from the Dutch, Italian, Spanish and French schools.

The entire history of art is housed here in four buildings, of which the greatest and grandest is the Winter Palace, built by the architect Francesco Rastrelli in the 18th century.

The royal regalia of Russia’s monarchs are kept in the Moscow Kremlin – the ancient capital of the grand princes and czars. The most famous item is the golden Cap of Monomakh, also known as the ancient Russian crown.

Monomakh’s Cap is a conical, golden headpiece, adorned with precious stones and trimmed with sable fur. This sable is changed on a regular basis, of course, as it does not keep well. However, the crown itself remains the same.

The Russian crown was most likely made in Central Asia, and it is typically Eastern headwear. The most logical theory for its origin is that the golden skull-cap was presented by the Tatar Uzbek Khan to the Prince of Moscow, Ivan I Kalita, in the 14th century.

The prince was a loyal ally and vassal of the Tatar Mongols, who had conquered ancient Russia a century before his rule.

A little over a century later, Ivan Kalita’s descendant, Ivan III, defeated the Tatars and became an independent monarch. After the fall of Byzantium, the czardom of Muscovy was left as the last remaining Orthodox kingdom.

Around this same time, the legend was born that the coronation regalia of the czars was actually much older. The ceremonial dress was alleged to date back to the 12th century, when Byzantine Emperor Constantine Monomakh sent it to his son-in-law Vladimir Monomakh, Grand Prince of Kiev – an ancestor of the grand princes of Muscovy.

This legend ushered the Monomakh’s Cap into the history books. It was used to crown Russia’s monarchs of the old Rurik dynasty; it was fought for in the Time of Troubles in the 17th century; and it crowned the new dynasty of Romanov rulers, the first of whom was chosen by a national council in 1613.

The last czar to be crowned with Monomakh’s Cap was Ivan V, the elder brother of the great reformer and first emperor, Peter the Great. Ivan and Peter were jointly crowned in one ceremony, with a copy of Monomakh’s Cap being made for the younger of the two.

After this, the Russian capital was moved to St. Petersburg, the czars took the title of emperors, and the ancient crown was not used again until 2002, when a copy of the crown was made for Vladimir Putin’s 50th birthday and given to him as a gift.

Coronation Trousseau of Empress Elizabeth (And 14,999 of her other dresses) 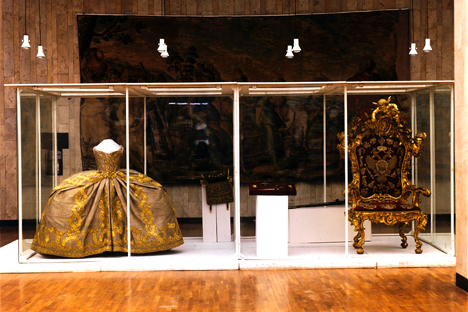 Russian Emperor Peter the Great died in 1725, without leaving a male heir. Instead, Peter left two daughters born out of wedlock – Elizabeth and Anna. After Peter’s death, rule passed first to his widow, Catherine I; next, to his grandson; and, finally, to his niece. In 1741, Elizabeth seized the throne in a palace coup – one of many to occur in the 18th century.

The coup went off practically without bloodshed. Legend has it that Elizabeth prayed before the escapade and vowed not to execute anyone.

When the new czaritsa was crowned, a special coronation trousseau was sewn of smooth silver brocade embroidered with gold. It is kept today in the Armory Chamber of the Moscow Kremlin.

The dress was made in Russia – it was important to show that the empress was not as fond of foreigners as her predecessors had been. The trousseau was cut according to the fashion of the day: gigantic, as wide as a person’s height.

Elizabeth was considered one of the most beautiful women of her era, and she adored dresses. When she died 20 years after being crowned, she left 15,000 dresses, a chest of stockings, an empty royal treasury, an unfinished Winter Palace (the future building of the State Hermitage) and colossal debts.

In the final years of her life, tailors refused to provide services to the palace on credit.

The Amber Room (Eighth wonder of the world)

The Amber Room was created in Prussia (now a part of Germany) and presented as a gift to Peter the Great by Frederick I. The room was altered later by the Italian architect Rastrelli, on the orders of Empress Elizabeth. The whole room was fashioned from different panels made out of amber and wood covered with gold leaf.

It was kept at the Catherine Palace in Tsarskoye Selo, just outside St. Petersburg, until World War II. During the war, Leningrad (as St. Petersburg was called back then) was under siege, and all the city’s surrounding outskirts were overrun and pillaged.

The Amber Room was removed, and, for the rest of the war, it was put on public display at the castle in Königsberg – today the Russian city of Kaliningrad. However, the room went missing during the storm of Königsberg by Soviet troops.

Nobody knows whether it was destroyed during an air raid, or whether it is hidden in the castle’s underground storerooms and remains buried to this day. It could have been successfully spirited away from Königsberg and is now hidden at a secret location in Germany, the Czech Republic, or Austria. In any event, no one knows for sure.

The search continued throughout the second half of the 20th century, but, in the end, it was decided to create a new Amber Room. The reconstruction lasted from 1981 to 1997, and the room was restored and opened for public display in 2003.

It was shown in its original home at the Catherine Palace, to mark the 300th anniversary of the founding of St. Petersburg.

The Armory at the Moscow Kremlin is home to Catherine the Great’s imperial scepter, which is set with a huge, green-tinted diamond, with 180 facets and a weight of 189.6 carats. This legendary diamond was discovered in India at the end of the 17th century.

The diamond from which it was originally cut initially weighed around 400 carats, but was greatly reduced during the cutting process.

At the end of the 18th century, it was bought for 400,000 golden florins by the Armenian jeweler and banker Ivan Lazarev, who, at the time, was in the service of the Russian government. In turn, the diamond was purchased from Lazarev by Count Orlov.

Alexei Orlov was one of Catherine’s favorites and a patron of the sciences. He was in correspondence with Jean-Jacques Rousseau, developed a breed of horse known as the “Orlov Trotter” and was very active in the running of the state.

He presented the diamond as a gift to the empress, and she ordered it to be set in her coronation scepter and named in honor of the count.

According to another version of the story, the empress took a liking to the diamond herself, and Orlov was just acting as an intermediary, in order to deflect accusations of excessive extravagance from the empress.

Whatever the true story, all the crowned heads of Europe were envious of Catherine, because, at the time, there was not a diamond anywhere in the world to match it.

Of course, the stones cut from the enormous Cullinan diamond, which are part of the British crown jewels, are much bigger. This was only discovered at the beginning of the 20th century, though.