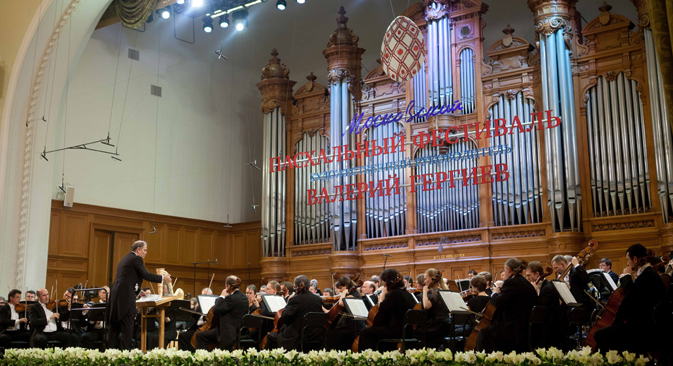 The Moscow's Easter Festival is held under the direction of conductor Valery Gergiev (L). Source: ITAR-TASS

For the 12th time, Russia will hold the Easter Festival this year. Starting May 5 (Orthodox Easter Sunday) and running through May 16, soloists, choirs and the orchestra of the Mariinsky Theatre will tour Western Russia, performing concerts and operas in halls and on public squares.

The history of the Easter Festival began in 2002, when former principal conductor of the Mariinsky Theatre, Valery Gergiev, and then mayor of Moscow, Yuri Luzhkov, came up with the idea of organizing concerts at the capital's finest venues and squares throughout the week of Easter – along the lines of various European festivals.

It received the backing of both the patriarch of the Russian Orthodox Church, who blessed the festival, and the Russian president.

This was the case in 2005 and 2010, when the festival was dedicated to the 60th and 65th Victory Day anniversaries, and so it is again this year, when the 70th anniversary of the Battle of Kursk — a turning point in World War II — will be celebrated.

The festival in its present form took shape in the early 2000s. There are four programs: symphonic, chamber, choral and (the public’s favorite) bell-ringing.

Concerts are held in halls and on public squares, while the obligatory opening and closing ceremonies take place on Poklonnaya Hill in Moscow's Victory Park. For this occasion, it has become customary for Moscow’s local government to disperse the clouds over the city with silver nitrate.

The second program sees the festival move beyond the confines of Moscow and across Russia. This year, Valery Gergiev — accompanied by the symphony orchestra, soloists, and choir of the Mariinsky Theatre — will crisscross the country by charter train, giving concerts in regional centers and towns.

The festival motifs are education, enlightenment and charity. In this spirit, the provincial concerts are usually free, even though there would be no shortage of people willing to pay to see a top-class orchestra under the baton of Valery Gergiev.

In years gone by, the Easter Festival has seen performances by some of the finest Western artists, including bass-baritone Bryn Terfel, cellist Mischa Maisky, conductor Philippe Herreweghe, pianist Lang Lang and others. This year, only two foreign stars will appear — the singers Rene Pape and Ildar Abdrazakov.

"They have both played with me many times before and are artists of global standing. Rene Pape and I have just released a recording of Wagner's 'The Valkyries,' in which he sang the role of Wotan. I don't believe that Moscow is sufficiently acquainted with this outstanding performer. Ildar Abdrazakov, too, whose name adorns billboards worldwide, should also be more familiar to Moscow audiences," said Gergiev at a press conference dedicated to the festival.

However, the focus is on geography. Gergiev and the Mariinsky orchestra, choir and soloists (who are shouldering most of the festival) will perform in Smolensk and Pskov in the west, Nizhny Novgorod in the east, Cherepovets and Murmansk in the north, and Belgorod, Stary Oskol, Yelets and Lipetsk — all important cities in the Battle of Kursk — in the south.

Gergiev will give concert renditions of several operas. The close of the festival in Nizhny Novgorod and Moscow will feature a performance of Berlioz's opera, "Benvenuto Cellini," while Cherepovets and Moscow will hear Verdi's "Attila," and Kostroma Dargomyzhsky's "Mermaid."

As part of the choral program, Moscow will once again host the Afonsky Choir of Monks, the Abkhazian State Choir, the student choir of the Belarusian Academy of Music, the Boni Pueri Czech Boys' Choir of Hradec Kralove, Serbia's Melody Choir and Armenia's Speghani Youth Choir.

One of the best-loved parts of the program is the week of bell-ringing, which takes place in Moscow and St. Petersburg. The tradition dates back to the days of Czarist Russia: Moscow's finest ringers would take turns sounding their bells, so that the peal of the city's "forty times forty" churches lasted almost continuously for the whole week of Easter.

The ringing could even be heard all around in smaller towns. It was also standard practice in those days to let children go up the bell tower and try for themselves. This tradition, incidentally, still exists.

Since then, most of Moscow's churches have been blown up or torn down, and many bell-ringers have been forgotten. Thus, the Easter Festival seeks to revive the unique traditions of Russian bell-ringing (which differ radically from those that European ears are accustomed to) and introduce them to a new generation of citizens.

A detailed program of the festival (including an English version) can be found here.