The magazine on a cultural mission launched in London 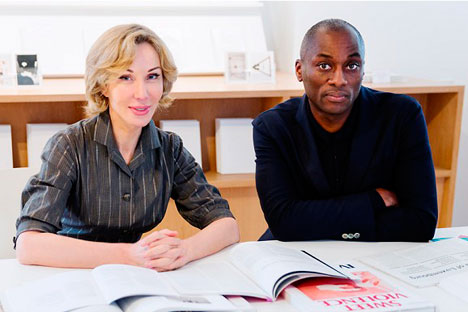 Editor-in-chief Ekow Eshun has been director of London’s Institute of Contemporary Arts and editor of Arena and other magazines. Founder and director of the Calvert Foundation Nonna Materkova is an economist from St. Petersburg. Source: Press photo

East End-based website of Calvert Journal with a sense of style brings a colorful vision of Russian creativity to the curious.

The offices of The Calvert Journal are packed with beautiful young people, ranged cheerfully around computers on a conference table. In the adjoining gallery, they are setting out wine glasses for a reception and putting up screens to broadcast images from the new website.

“Some of us may be young, but we all have good, diverse experience in journalism,” says Anastasia Fedorova, commissioning editor of the online magazine, which is based in fashionable Shoreditch, east London.

“Visual content is our strength,” says Fedorova. “One of our initial goals was to build a new visual aesthetic for Russia.” The journal is a radical kaleidoscope of colour and form without a matryoshka or onion dome in sight. “It was not our deliberate intention to overthrow stereotypes,” says Zinatulin. “We are creating a platform for open debate about important cultural issues. We want to show Russia is a complex place inhabited by humans.”

The English-language journal has been operating since January this year as part of the Calvert Foundation, and showcases art, design, fashion, film, architecture and photography from around Russia, with a special emphasis on regional projects.

Editor-in-chief Ekow Eshun has been director of London’s Institute of Contemporary Arts and editor of Arena and other magazines. He talks about the “rising generation of young artistic talent” that’s changing Russia and says the journal is for anyone who is “curious about the world”. It has featured well-known figures such as Moscow architect Alexander Brodsky, but also quirky, smaller stories like the success of a 21-year-old bow-tie designer in Vladivostok.

Founder and director of the Calvert Foundation Nonna Materkova is an economist from St Petersburg. “It’s my baby,” she says, her eyes shining. “I am more and more passionate about it and there is huge interest.”

Alexei Kudrin, until recently Russia’s long-serving finance minister, came to Materkova’s gallery during an official visit to London in 2011 and discussed plans for a portal to promote their country’s creative talent. “I support the idea of improving Russia’s image through culture and art,” Mr Kudrin told the journal earlier this year. He is dean of liberal arts at St Petersburg State University but still “very involved” as one of Calvert’s trustees.

Materkova and Kudrin share a common belief in the “soft power” of cultural exchange. “It was very sad to see how the relationship between Russia and Britain fell apart in the last decade,” Materkova says. “Ordinary people want to know more. I wanted to show people here in London the Russia that I know.”

Audience figures have “surpassed expectations”, according to Zinatulin. London-based journalist Alexander Smotrov approves wholeheartedly, tweeting that the journal is “brilliant, futuristic… This is Russia how it should be: creative, innovative, open to the world.”

For more information about the journal, go to www.calvertjournal.com