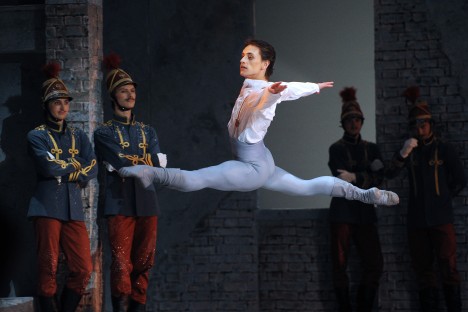 In Russia, no one takes any notice of what people without status think. But, in London, their opinion is valued: The whole system is built on the fact that they are a team, and there are no separate individuals. Source: ITAR-TASS

Famous ballet dancer Sergei Polunin, who left London and has been hiding from the press for quite some time, gave an interview to Izvestia in which he talked about the professional and artistic differences between the ballet worlds of Moscow and London.

Famous ballet dancer Sergei Polunin, who left London and has been hiding from the press for quite some time, gave an interview to Izvestia in which he talked about the professional and artistic differences between the ballet worlds of Moscow and London.

Izvestia: You’re dancing in Kenneth MacMillan’s ballet “Mayerling” at the Stanislavsky and Nemirovich-Danchenko Musical Theatre. MacMillan is rarely danced in Moscow, although people like his historical melodramas. But you seem to have a lot of experience with performing in his ballets.

Sergei Polunin: Yes. When I was 17, I was in the corps de ballet in his “Manon” and “Mayerling.” It was basic training that I needed in order to advance. There’s a lot of improvisation in MacMillan’s ballets: You don’t just play them, you live them.

Izvestia:How do you think our audiences will respond to “Mayerling?” It is a rather outlandish story from the Russian point of view.

S.P.: I don’t think 100 percent of the Russian public will like “Mayerling.” It’s a matter of taste. Here, the artistic director Igor Zelensky has that taste.

In London, the Royal Ballet has been performing MacMillan for many years; the show is constantly in the repertoire and even the scenery is old. But the theatre has done a colossal amount of work, and perhaps understanding will come with time. We’ll see.

Izvestia: You’re 23 now. You have said that you want to end your ballet career when you’re 26.

S.P.: That’s like a dream. For some reason, when I was 18, I thought that 26 was a good time to stop. Ballet punishes your body. Until you’re 32, everything is just fine, your body recovers; although, even after 28, you have to increase your workload in order to keep yourself in shape. But when you get older it’s much more difficult.

Izvestia: So if you stop when you’re 26, what will you do?

S.P.: That’s a good question. I don’t know what I could do next. If I get past that mark – 26 years – I’ll carry on dancing to the end. I’ll prove that it’s possible to perform at a good level, even at 50. Besides, there are injections you can have now to help your muscles to recover, so you can retain the hormones of youth in your body for longer.

Izvestia: I have to ask you about why you left the British Royal Ballet. Why did you offend its management so much?

S.P.: I don’t think I somehow offended the management: We parted on good terms. I recently danced “Marguerite and Armand” with Tamara Rojo, and, in June, the recording will be shown in cinemas all over the world. I hope we’ll be doing more work together in the future.

Izvestia: Has that already been agreed?

S.P.: They never say anything in advance. They spare their dancers. The Royal Ballet takes very good care of its dancers, who work 24 hours a day. They probably don’t need to know whether I’ll dance for them: After all, I have left the company.

In Russia, no one takes any notice of what people without status think. But, in London, their opinion is valued: The whole system is built on the fact that they are a team, and there are no separate individuals.

In human terms, that’s good; but, in the end, it’s not good for art. They often keep a talented artist at the same level as everyone else; they don’t let them show what they can do.

Izvestia: Was that one of the reasons why you left the theatre?

The British paid for their houses with Nureyev and made their careers out of him. But, when he was past his best, they simply threw him out. It was the same with Mukhamedov and with Igor. They get rid of everyone: It’s a kind of British mafia.

So I thought that, in a few years’ time, someone young would come along – someone who was easier to manage and who didn’t need to be paid as much. The pay goes up every year here.

At the same time, according to the contract, they can’t fire you: You can only leave by yourself. So they start putting pressure on you, not giving you shows. Imagine it. At the beginning they give you everything, but later, nothing – in your own theatre. 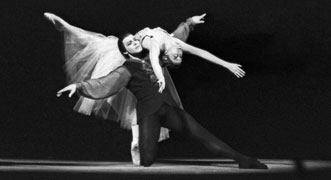 Izvestia: Do you feel comfortable at the Stanislavsky and Nemirovich-Danchenko Theatre?

S.P.: I like the fact that I can show the theatre something new, that people listen to me, that my tastes coincide with those of the management. And I especially like the freedom. You spend your life in the theatre, so, if they don’t give you any freedom, why work there at all?

Izvestia: But you didn’t choose this company straight away: You went to American Ballet Theatre (ABT) and the Mariinsky; although, for some reason, you weren’t seen at the Bolshoi.

S.P.: At that moment, the Bolshoi didn’t have any leaders; but when they talked about hiring Polunin, it turned out they were afraid of me. I was getting some negative press at the time. They were saying I was unpredictable and things like that: No one missed their chance to get a dig at me while I was at my peak. People were afraid I would let them down.

What I like about Zelensky is that he wasn’t afraid to take a risk. He discussed the prospects with me in a professional way, and I understood that the theatre was interested in me, not just in the performance. You need to take risks in art. It can bring great success.

Izvestia: Is your passion for tattoos also a risk?

S.P.: It’s not really a passion. I stopped doing it the day before I left the Royal Ballet. It all coincided. My only source of happiness in London was my girlfriend. I no longer got pleasure from the theatre, I was simply turning out the same ballets – so I got involved with a tattoo parlor. It was a bit childish.

When I realized that my girlfriend and I were breaking up, I knew I had to give up tattoos too. I’d got too far into it, and I was tied up with the bank: A friend and I had half-shares in a parlor.

Izvestia: So now you only have creative plans?

S.P.: No, there’s always something more. I’d like to create my own ballet wear. I know what dancers need. The main thing is to have the idea; then you’ll find the people you need.

Izvestia: What’s your view of the situation with the Bolshoi Ballet’s artistic director?

S.P.: That kind of thing wouldn’t happen in the West. They don’t take ballet that seriously. In Russia, it’s a huge force – and the Bolshoi is a country within a country. The main thing is to make sure it never happens again.