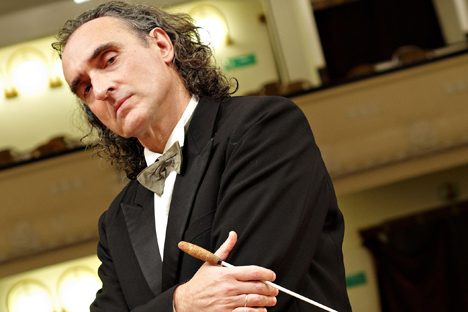 “The Soloists of Russia Orchestra,” under the exuberant and masterly direction of conductor Misha Katz, offered astonishingly virtuosic and heartfelt performances on April 30, 2013, at the Russian Embassy Washington D.C.

Julian Milkis, known to the Russian press as “the best clarinetist in the world,” and a former student of Benny Goodman, stole the show with a breathtaking performance of Astor Piazzola’s “Oblivion.”

Violinist Liana Isakadze reminded the audience of her star power and luminescence with her visceral interpretations of Vivaldi.

The gala concert, part of the International Project “Culture Beyond Borders,” paid tribute to Solomon Mikhoels, and the 25th anniversary of the cultural center created in his name.

Sixty-five years ago, Soviet dictator Joseph Stalin ordered the execution of Mikhoels, and the event became known as a terrible turning point for Jews in the Soviet Union.

The Soviet Jewish actor was run over by a car so it would appear to be a traffic accident, according to historians.

In 1928, the head of the theater, Aleksandr Granovskii, defected while on their European tour. Mikhoels became the new artistic director and attempted a range of roles to the great acclaim of Russian and Western critics. In 1941, Mikhoels led the Jewish Anti-Fascist Committee, and in 1943, he traveled to the United States, Mexico, Britain and Canada to raise money for the Red Army.

It became clear later that the beloved actor was murdered by KGB agents and his death was made to look like an accident. The event is seen as a stark marker of the beginning of a new wave of official anti-Semitism in the Soviet Union.

Mikhoels was the master actor of his time, a comedian who later became best known for his King Lear. In 1928, The New York Times critic C. Hooper Trask referred to Mikhoels rendition of Binyomin (from the The Travels of Benjamin) as “one of the most stirring performances of my theater-going career.”

The artists’ performances in Washington D.C. on April 30th were deeply powerful, portraying both the depths of sadness (violinist Ilian Garnet’s performance of Jan Benda’s “Grave”) and an almost giddy sense of celebration (as when the entire orchestra whooped it up in Leonard Bernstein’s “West Side Story”).

The only unsettling part of the evening was the presence of two TV screens on the sides of the stage, showing a montage of footage from the Solomon Mikhoels International Culture Center in Moscow.

The footage had the “you had to be there” feeling about it. It was interspersed with other footage from Soviet Cinema, World War II documentaries, and photos of the liberation of concentration camps.

The effect was jarring but not in the way the performers might have hoped; Americans respond better to more subtle associations between art and politics.

Overall, however, the concert was a powerful nod to Solomon Mikhoels legacy and the quarter century of productions performed in his honor.