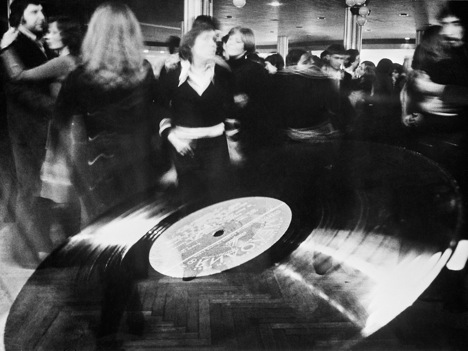 While in Europe, young people are among the most ardent buyers of vinyl disks, in Russia the industry still depends on collectors. Source: ITAR-TASS

Music fans themselves had the opportunity to select which releases should make the top 50 "golden collection" by casting their votes on openspace.ru.

In 1991, Melodiya, the Soviet Union's sole record label, put out its last vinyl release, "Neizvestny Utyosov" (Unknown Utyosov), a collection of lesser-known material by Soviet jazz singer Leonid Utyosov. Back then, the vinyl format appeared to be dead. Now, Melodiya is reviving it by rereleasing its "golden collection" on vinyl.

"The beginning of 2012 signified the return of the vinyl disc, which we can call triumphant, practically all over the world," Melodiya general director Andrei Krichevsky told The Moscow News. International acts such as Radiohead release new albums on vinyl, while popular music shops like Moscow's Ukeleleshnaya spurn CDs for records.

"In Russia, we can also see quite a significant interest in vinyl." Krichevsky said. It was vinyl that brought Melodiya to the international limelight after it opened in 1964.

Krichevsky said that the label still has a huge collection of records on analog tape. The latter is most suitable for vinyl releases as it preserves the "warmth" of the sound, which is lost in digital recordings. Melodiya long used St. Andrew's Anglican Church in Moscow as its recording studio, thanks to the building's excellent acoustics.

Melodiya announced its plans to resume putting out vinyl releases a year ago. Music fans themselves had the opportunity to select which releases should make the top 50 "golden collection" by casting their votes on openspace.ru.

Topping the list was "Geroi Asfalta" (Hero of Asphalt), the 1987 debut album by Aria, one of the first Soviet heavy metal acts. In late April, it became Melodiya's first vinyl release in more than two decades, and the 500-copy run immediately sold out.

On the people's choice list, "Geroi Asfalta" was followed by Kino's 1988 "Noch" (Night); the soundtrack to the 1969 children's cartoon "Bremenskiye Muzykanty" (Town Musicians Of Bremen); Paul McCartney's "Snova V SSSR" (Back in the USSR), recorded live in a studio and originally released only in the Soviet Union in 1988; and Nautilus Pompilius's 1988 album "Knyaz Tishiny" (Prince of Darkness).

It comes as no surprise that most picks voted for rerelease date back to 1987 to 1989 - a time when, thanks to perestroika, Melodiya shed its ideological bias and began to put out records by local rock bands, which previously had been available only on samizdat (self-distributed) tapes. These early Melodiya rock records sold millions of copies, and are still fondly remembered by several generations of music fans.

According to Krichevsky, Melodiya aims to release all the albums on the top 50 list, although not necessarily in the order they were voted. "Negotiations with the rights holders have a serious impact on the speed of preparing albums for rerelease," he said. "Of course, we will first put out those albums for which the material is completely ready."

The next titles slated for release are "Bremenskiye Muzykanty/Po Sledam Bremenskikh Muzykantov" (In the Footsteps of the Bremen Town Musicians), which will be a double LP featuring the soundtracks of both the original cartoon and its 1973 sequel, and a collection of songs by famed bass Fyodor Chaliapin. Several more reissues are scheduled for this summer, including the 1976 radio play "Alisa v Strane Chudes" (Alice in Wonderland), which includes songs by bard Vladimir Vysotsky.

Thirty five years since composer Aram Khachaturian has passed away

By the time Melodiya put out its last vinyl release, it was no longer the only record label in the country. Newly arrived independent labels were quite active in the niche of domestic and Western rock. However, just a few years later, vinyl seemed obsolete, and they switched to the newer format of compact discs. Record collectors saw their hard-built vinyl collections lose their value as people increasingly switched to CDs.

But now, as CDs too seem a thing of the past, many music fans are dusting off their turntables (or buying new ones) and returning to LPs.

The vinyl resurrection has prompted new stores to pop up around Moscow. Radiotekhnika, which sells both records and audio equipment, recently opened at Flacon design factory.

According to Yevgeny Ivanov, Radiotekhnika's co-founder, interest in vinyl is partially driven by record labels looking to cash in as CD sales plummet. "[Vinyl disks] are not that easy to counterfeit," he said.

While in Europe, young people are among the most ardent buyers of vinyl disks, in Russia "the industry still depends on collectors," Ivanov said.

Melodiya's Krichevsky disagrees. "Unexpectedly, the main buyers of vinyl LPs are young people between 20 and 30 years old, for whom it must be a lifestyle choice," he said. He added that rock and classical music are the most popular genres.

However, all is not rosy for vinyl fans, as high prices concern customers and retailers alike. Imported records available in Russia are more expensive than in Europe, Ivanov said.

"Customs duties and transportation costs drive up the retail prices a lot," he said.

In recent years, domestic artists such as Mumiy Troll and NRKTK have also begun releasing vinyl disks. But although Radiotekhnika purchases the bands' albums from distributors, Ivanov said the cost is not substantially lower. "We'd like to see some breakthrough in prices," he said.

Melodiya releases are not cheap, either, compared with prices for CDs. "Geroi Asfalta" sold for 1,000 rubles, which may not have been a problem for collectors or hardcore Aria fans, but was steep enough to put off regular customers.

Local vinyl releases would be cheaper if they were produced in Russia. But at the moment, the country has no capacity for vinyl manufacturing. Melodiya releases come from Germany. Back in the Soviet era, Melodiya controlled several record manufacturing plants, including in St. Petersburg and the town of Aprelevka outside Moscow. Both of them went out of business in the mid-1990s.

Meanwhile, Krichevsky is optimistic, stressing that qualified personnel is what is needed to launch local production of vinyl records. As vinyl sales increase, he thinks, young people may take interest. "I believe it's just a matter of time," he said.