For many, the 21st century Mariinsky hits the high note in perfect pitch 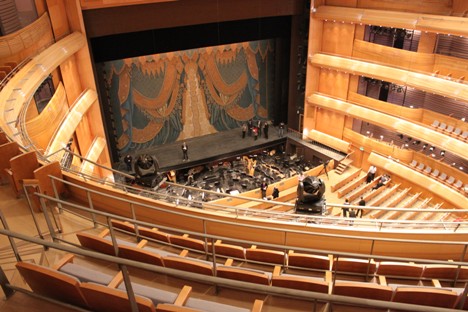 Opera is likely to predominate at the new theater, and ballet will continue to be housed at the 19th century building. Source: Pauline Tillmann

A modernist theater opens its doors to the adoring crowds and local skeptics while director Gergiev basks in the glow of accomplishment.

The new Mariinsky Theatre in St. Petersburg, called the Mariinsky II, has been a decade in the making and dogged by false starts and controversy. The distinctive glass and limestone building opened in May with a lavish gala attended by a former resident, President Vladimir Putin.

The $700-million brainchild of famed artistic director and conductor Valery Gergiev, the Mariinsky II is situated directly across from the original 1860 building, on the other side of the Kryukov canal and connected by a pedestrian bridge.

The new theater sits in the heart of historic St. Petersburg and its modernist structure is accentuated by the auditorium’s enveloping wall of amber-colored onyx. The mineral, shipped in from Italy, Iran, Macedonia and Turkey, serves as a beacon to the music-loving public.

The 2,000 seat concert hall is a signature work designed by Canadian architect Jack Diamond, who placed great emphasis on maximizing the acoustic experience and creating a sense of intimacy.

The hall, for instance, has only three balconies instead of the standard four or five. In combination with the original theater, and a concert hall finished in 2006, it creates what even The New York Times called a “St. Petersburg arts complex with the scope and versatility of Lincoln Center.”

"Today is an important day in the cultural life of our country," President Putin said at the black-tie opening gala.

The theater began as an attempt to create a 21st-century architectural splash in Russia’s most distinguished city. A decade ago, the Californian architectural firm of Eric Owen Moss won the commission to build Mariinsky II, but the project was suspended after financing problems arose.

French architect Dominique Perrault was subsequently commissioned, and envisioned the theater as a massive golden egg.

Gergiev balked at the whimsical notion. “At some point I just felt that we did not need someone trying to build an opera, rather someone who knows how it’s done,” he said.

The commission next fell to a Canadian. Jack Diamond had designed the Symphony Hall in Montreal and the Four Seasons Center for the Performing Arts in Toronto.  Gergiev visited both and was particularly impressed by the acoustics.

The new theater can stage three performances daily and will have much less downtime between major productions. It is all part of Gergiev’s plans to make St. Petersburg a major international center for the arts, and a draw for traveling groups from major foreign theaters. Even before the Mariinsky II, many critics stated that the Mariinsky had already eclipsed the Bolshoi in terms of vision.

The new theater sits in the heart of historic St Petersburg, some critics have compared the theater to a shopping mall or a hotel. Source: Pauline Tillmann

However for some within the St. Petersburg arts community, the new building stands in stark and jarring contrast to much of the old cityscape. Mikhail Piotrovsky, the director of the Hermitage museum, said the construction was a “mistake in urban development.” Other critics have compared the theater to a shopping mall or a hotel.

Diamond said that ultimately, the acoustics will convince the naysayers. “Once residents come and experience a performance, then they can pass judgment.”

Opera is likely to predominate at the new theater, and ballet will continue to be housed at the 19th century building.

At the gala performance, there was an array of talent and samples from the Mariinsky’s rich history and current roster, including a recreation of Nijinsky’s iconic and lyrical “Rite of Spring.” Placido Domingo performed “Winterstürme” from Wagner’s Siegmund. Opera star Anna Netrebko offered a preview of an upcoming performance of Verdi’s Lady Macbeth.

The gala coincided with Gergiev’s 60th birthday party, and his patron led the celebration. "A man endowed with truly unending creative energy, brilliant, inimitable Maestro,” Putin said in a birthday telegram, adding that the conductor is "one of the outstanding musicians of our time."