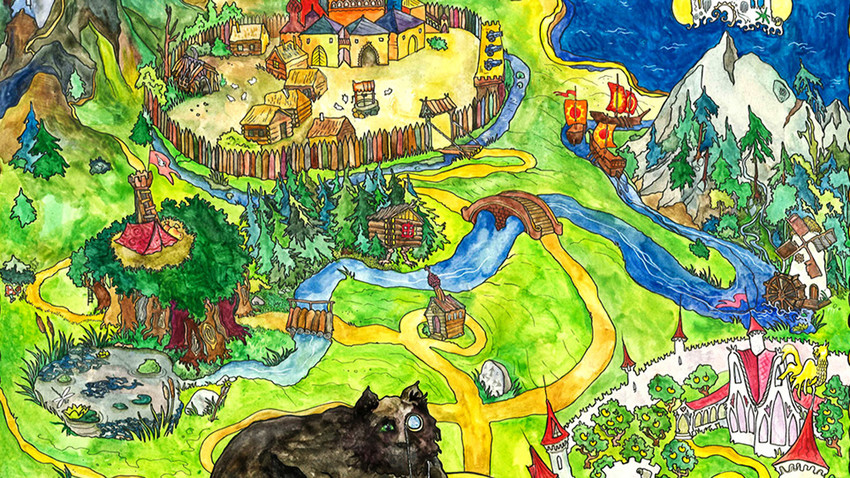 A map of Magical Kingdom.

Anna Perepechenova
Russia Beyond has compiled a list of the most courageous and colorful Russian fairy-tale protagonists – and antagonists.

The characters of Russian fairy tales inhabit where they never get bored. They’re eternally engaged in all kinds of trials and tribulations – to do the bidding of the king, win themselves a beautiful wife, save their land or defend their loved ones from evil beasts.

1) Baba Yaga is one of the most frequently encountered characters in fairy tales. She’s most often found as the owner of a wooden hut on chicken legs, or as the guardian of the way into a . And she doesn’t let just anyone pass. Baba Yaga tests the hero’s nerve and courage. And if he proves worthy, she helps him along his way with his task, giving him talismans that will aid his work.

However, there’s another kind of Baba Yaga who is best avoided – the one who enjoys feasting on children. The protagonists must rely on their wits to save themselves from her. She may also, on account of her age and laziness, give "the kitchen work" to someone who, out of foolishness or good-heartedness, has let "supper" . Baba Yaga can be quite pugnacious, chasing the hero for ages on her giant broom. Tales include “Baba Yaga,” “Vasilisa the Beautiful” and “The Magic Swan Geese.”

2) Kikimora is an evil spirit, and she appears in two forms, depending on who she marries. There’s the Bog Hag, who is married to a hobgoblin, and the House Hag, who is the wife of Domovoi (a house spirit in Slavic folklore). The Bog Hag appears in fairy tales as an ugly old woman clad in seaweed. Her jobs are to frighten those who wander through the marshes, lure travelers into quicksand and steal small children.

The House Hag is quite different – she lives quietly in her house and rarely shows herself to people. Legend says that hags are most often the souls of people who have drowned, or of children who died before they were baptized. The most well-known tale of the hag is “Kikimora,” by Alexei Tolstoy.

3) Ivan the Fool is usually the youngest son of a peasant family. He doesn’t think before and often does things randomly. Other people don’t take him seriously – at best they treat him like a fool, and at worst they push him around. Ivan the Fool doesn’t like work; he can’t manage even the simplest task, bringing woe upon his family or employer. Yet somehow he always blunders through thanks to some miraculous and ends up achieving feats that not even heroes can manage.

Despite his chaotic nature, Ivan the Fool fulfills a very important role: his bungling antics provide amusement for both the other characters and the readers too, and they prove that even the slowest sometimes turn out to be the fastest. We find Ivan the Fool in stories such as “Little Ivan the Fool,” “The Humpty-Back Little Horse” and “Sivka-Burka.”

4) The Frog Princess is the perfect wife, clever and beautiful, sensible and resourceful, loyal and thrifty. And on top of all that, she’s skilled in the magic arts and has an army of nannies at her command, who can assist her in even seemingly impossible circumstances. There is, however, one drawback. On the orders of her powerful father, she has been changed into a frog for three and is compelled to appear in that form to her betrothed – Tsarevitch (Crown Prince) Ivan.

Her fairy tale has the whole gamut of fantastic elements. Here you’ll find ritual, as the Crown Prince finds the frog with the aid of an arrow; there’s the breaking of rules – Ivan burns the frog’s skin, and loses his beloved; and in penalty for his transgression, he is assigned a trial which he must endure, in order to win his dear froggy back again. The tale is called simply “The Frog Princess.”

5) Nightingale the Robber is the hero of the classic Russian epic tale, “The First Journey of Ilya Muromets.” He lives in a nest which is in either nine or twelve oak-trees. He’s the head of a family – his three grown-up daughters and their husbands live with him there. He stalks the road from Chernigov to Kiev – no matter whether travelers go on horseback or on foot, the Nightingale whistles at them with his deathly call and frightens them to death.

6) Koschei the Immortal, an evil monarch, is usually depicted either as a scrawny old man or as a king on horseback. He is not completely immune to death – he can be killed, but to do so you need to break a magical needle, which is hidden in an egg, which is in a duck, which is in a hare, which is in a chest in an oak tree. There’s an alternative version of the story, in which a stallion brings death to King Koschei. His tale is a sad one; one of his stories, “Koschei the Warrior,” tells how he had once been a warrior but was betrayed by his comrades and taken prisoner by his enemies.

After many long years, he was able to break out of his rusting chain armor and started to take his revenge. Several versions of the Koschei story have him imprisoning women, usually the betrothed of the young heroes of the tale. This is the version we find in tales like “Koschei the Immortal,” “Maria Morevna” and “The Frog Princess.”

7) The Firebird is a Russian version of the legend of the Phoenix. Usually, the bird is a lure for brave young men who seek fame and fortune. The Firebird is a large bird of extraordinary beauty, enveloped in fire – “her feathers were of burnished gold, and her eyes of Oriental crystal.” Despite this magnificent appearance, it’s easy to capture the Firebird for illicitly eating the apples in the Tsar’s garden, or catch her scoffing down the grain of the wheat fields.

Very often, the hero happens upon a Firebird’s feather and brings it to the Tsar as a gift, not knowing what ill may then befall him. Having been given a feather that shines more brightly than many candles, the Tsar usually wants the whole bird and sends the hero off on a perilous quest. We find the Firebird in tales like “Tsarevitch Ivan, the Firebird and the Grey Wolf” and “The Firebird and Princess Vasilisa”

8) Vodyanoy (or Water Spirit) is the King of the Deep. In Slavic mythology, the Water Spirit is often an unattractive old man covered in silt and algae, and sometimes with a fishy tail. But he can change form.

He dwells in all kinds of reservoirs and wells, but you’ll most frequently find him in the pools near a water mill. In mythology, he’s considered evil, but in fairy tales, he is often not malevolent, though he sometimes tries to prevent the young hero from marrying his beloved, especially if she turns out to be the Water Spirit’s daughter. The Water Spirit appears in a tale “Tsarevitch Ivan and Princess Marfa.”

9)Schuka is a pike fish. The Slavs of old assigned terrifying abilities to this fish – people thought it could swallow a man and that the Water Spirit rode it in the watery kingdoms. In Russian fairy tales, the pike assumes more reasonable proportions and a more harmless nature.

In fact, a meeting with a pike fish brings good luck, as the fish can even grant wishes. But you have to catch it first, as Yemelya the Fool (or Ivan in some versions) does in the fairy tale of the same name, and then release it back into the water. There is no limit to the wishes you may ask. Yemelya gets eight wishes in his tale. The tale here is “The Fool and the Fish.”

10) Vasilisa the Beautiful shouldn’t be confused her with her namesake, Vasilisa the Wise, who is a sorceress and daughter of the King of the Seas. Vasilisa the Beautiful is a merchant’s daughter. Her mother died young, leaving her to cope with an evil stepmother. She is sweet and good-natured but gets into a lot of scrapes, especially with Baba Yaga. But she’s helped in her adventures by a doll her mother left her.

The story of Vasilisa is an illustration of the folk belief that loving parents continue to watch over their children and help them even from the grave. The tale to read here is “Vasilisa the Beautiful.”

11) Gorynych the Dragon has many heads. He can appear out of the water, spew flames from his nostrils, occasionally fly on wings of fire and often lives in the mountains. Gorynych kidnaps women and besieges cities. But, unlike Baba Yaga, he can’t be bought off or distracted – he’s always determined to make a meal of those who disturb his rest or thwart his plans.

12) The Tsar is the all-powerful character of the fairy tale’s sub-plot. Very often, the young hero will meet the Tsar before his great adventure begins. Tsars always seem to lack beautiful brides, Firebirds or fearless stallions. And thus the Tsar is always dispatching young heroes – his own son, some knight in his entourage, or a newly arrived traveler – to distant realms, where the very thing the Tsar needs is to be found.

It also happens that our hero gets an audience with the Tsar in the middle of the story, putting a new twist in the tale and posing some new quest for the hero. We meet Tsars in tales such as “The Firebird and Vasilisa the Beautiful,” “The Frog Princess” and many others.