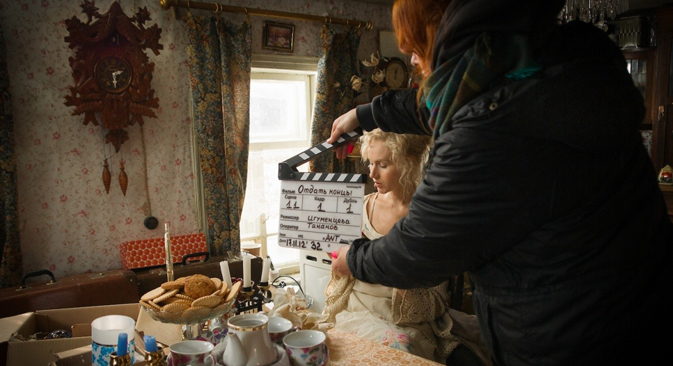 The 66th Cannes Film Festival will begin May 15. Nineteen films will compete for the Palme d’Or. Although there are no Russian-made movies on the list, the festival will still carry importance for Russian cinema.

Russian participation in the Cannes Film Festival began when the USSR was invited to the first festival in 1939. France extended the invitation during a period when it held high aspirations of turning the great power into its ally.

The Cannes Film Festival resumed in 1946, and the Soviet Union was invited as a victorious nation. “However, the nation’s involvement in the festival was spoiled by technical problems during screenings, and Soviet officials accused the organizers of sabotaging their films. Soviet movies were barely shown at the festival over the four following decades,” according to Joël Chapron, Head of Research and Distributor Relations of Unifrance and Selector of submissions to the Cannes Film Festival.

In the late 1990s, the controversies and intrigues associated with the participation of Russian films came to an end.

Russia takes “The Road To” Cannes

Since then, the likes of Pavel Lungin, Nikita Mikhalkov, Alexander Sokurov (nominated for the Palme d'Or five times) and Andrey Zvyagintsev have had a chance to really emerge. In a recent trend, the juries have begun paying more attention to film debuts.

Last year, Taisia Igumentseva, at that time a 23-year-old graduate of the Gerasimov Institute of Cinematography, won the 1st Prize Cinéfondation for her short film The Road To...

The Cinéfondation selects short to medium-length films, and young Russian directors like Taisia Igumentseva are appearing on the list more and more often.

“We hope that it is not a sporadic case, but a system, a new positive trend,” says Ekaterina Mtsituridze, the president of Roskino, which promotes Russian movies at world festivals and screenings.

This year the short film The Norm of Life by Evgeny Byalo, a student at the Higher Courses for Screenwriters and Film Directors, has been shortlisted for the Cinéfondation program.

The protagonist of the film is shocked by the first tragedy of his life when his father dies. However, it is just a norm of life for everyone around him, including his sister.

Bite the Dust is a story of Russian villagers who are shocked by the announcement that a giant meteorite will soon hit the Earth. Russian art-house lovers may complain that it's the same old themes - rural Russia, loneliness, depression and despair.

Igumentseva views her film as a new and bold tragicomedy. Joёl Chapron is quick to dismiss the misconception that comedies don't do well at film festivals. “If comedies are good, they are accepted well in Cannes.”

Both of Igumentseva's films were produced with the support of Alexei Uchitel, a popular Russian director. Yury Bykov’s The Major, which will also be shown in Cannes, was shot at Uchitel’s studio.

The Major has been shortlisted for Critics’ Week, one of the oldest sections of the festival, where first and second works by young directors are screened.

This year the Russian pavilion will feature two stands under the auspices of the Russian Cinema Fund, Roskino and the Ministry of Culture.

Roskino has been selecting students’ short films for the special almanac, Global Russians, which it plans to present at Cannes. Igumentseva will also be competing for the Golden Camera at the festival.

Although no Russian films are nominated for the Palme d'Or this year, Russian directors will still have a chance to show what they are worth.

Asked whether she’s scared to go to Cannes for the second time in a row and fall short of expectations this time, Taisia Igumentseva says: “It’s never scary. You are moving ahead, through hardships to the stars of cinema!”