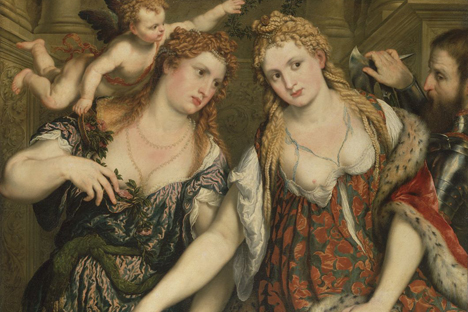 More than 70 masterpieces from the Hermitage return to rural Britain for a historic exhibition.

More than 70 paintings sold to Catherine the Great in the 18th century by the family of Britain’s first Prime Minister, Sir Robert Walpole, are back on display in the UK – thanks to St Petersburg’s State Hermitage Museum, which has loaned the collection for a summer-long exhibition.

Catherine, who presided over a golden age of Russian culture, began the art collection that became the Hermitage Museum in St Petersburg in 1764. In 1779 she bought more than 200 pictures from England, which formed the core of today’s world famous gallery.

Art historian Vladimir Levinson-Lessing, author of Masterpieces of Painting in the Hermitage, described the purchase as “one of the great events in the life of the Hermitage”.

Roomfuls of these paintings, including works by Rembrandt, Rubens, Poussin, Velázquez and Veronese, have returned to their former home, Houghton Hall, in deep countryside 100 miles northeast of London.

Britain’s first Prime Minister, Sir Robert Walpole, assembled this collection of European masterpieces in the early 18th century before his grandson gambled the family fortune away and had to sell them.

James Christie, founder of Christie’s auction house, arranged the sale to Catherine the Great and the consignment travelled on the frigate Natalia across stormy oceans to St Petersburg.

Back to the 18th century

Curator Thierry Morel has worked on the new exhibition, “Houghton Revisited”, for three years. Talking to RBTH, he recalled the moment in late 2010 when the Hermitage first agreed to lend a few pictures and the months of persuasion that followed, culminating in this stunning recreation.

He describes Houghton Hall, whose interiors William Kent designed specifically to frame Walpole’s collection, as “a living house, not an over-restored shell having lost its soul … it’s as if you had travelled through time to the 18th century and you enter Sir Robert Walpole’s house with its treasured possessions.”

Miles of parkland, with fallow deer, oak, beech and chestnut trees, a linden grove with a sundial, and unspoilt views, surround the Palladian palace at Houghton. Rediscovered records show just where each painting originally hung in Kent’s interiors, which have survived remarkably intact, full of brocaded silk, artistic tapestries and golden chandeliers.

The exhibition has reunited the art with the architecture built to house it, producing some delightful results, like bringing frames and paintings together again for the first time in two and a half centuries. A portrait of the sculptor and carver, Grinling Gibbons, now hangs inside a gilded pear-wood wreath that is thought to be his handiwork.

The vines, which form a recurrent decorative motif in the wonderful Marble Parlour, are echoed in the “Still Life with Grapes”, which is now above the door and, as Kent intended, gold and white pilasters border two fine portraits by Van Dyck, which face each other across the room.

Some works of art, transferred or sold on from the Hermitage, have been tracked down in public and private collections around the globe, including the National Gallery in Washington DC and the Metropolitan Museum in New York.

Carlo Maratta’s “Judgement of Paris” usually serves as a ceiling panel above a staircase in the palace-museum at Tsarskoye Selo and Morel recalls how the director there initially told him it would never leave.

Catherine the Great: An Empress of the arts

Mikhail Piotrovsky, Director of the State Hermitage Museum, has a woven portrait of Catherine the Great above his desk, in honour of her crucial role in Russia’s cultural development. Her determination drove the founding and amassing of the Hermitage’s world-famous art collection.

She wrote to her friend Baron Grimm about the paintings of the Walpole collection that “your humble servant has already got her claws on them and will no more let them go than a cat would a mouse.”

The Empress also promoted building, especially in her favourite neo-classical style, and commissioned several palaces to add to those already in St Petersburg.

“You should know our mania for building is stronger than ever,” she wrote to Grimm in 1779, the year she bought the Walpole artworks. She had, by then, also established a new Imperial Academy of Arts, brought western European artists to her court, corresponded with French philosophers, and encouraged crafts such as porcelain and furniture-making to flourish.

“She understood that the greatness of the country was … about the prosperity of art and science and how crucial it was, for the prestige of the country, to possess unparalleled museum collections,” Mr. Piotrovsky wrote in the catalogue for a Catherine-related exhibition in Edinburgh last year: “The Enlightenment with its aesthetics arrived in Russia via her policies.”

The Carlo Maratta Room, where it now hangs, is, according to Morel, “the only room in the world dedicated to this artist”, who was hugely fashionable in 17th century Rome.

Mr. Morel sees parallels between the collection’s two original owners: “Many people were wealthier at the time, but Walpole chose to spend his money on the best and that’s true of the architecture... and the pictures.

A few years later, Catherine the Great had the same ambitions, the same taste and intelligence. She created one of the finest art collections in the world. What was achieved in Russia was unbelievable...

This exhibition should encourage the public to go to St Petersburg and see those treasures where they usually belong.”

Mikhail Piotrovsky, Director of the State Hermitage Museum, has described “Houghton Revisited” as “an installation rather than an exhibition” and as an example of great collaboration between Russia and the UK.

“All the world is suing each other for possession of pictures so people are very afraid of lending things,” he said … “but in this case, bureaucrats, diplomats and museum people managed to find a solution and work together.”

Insuring the collection proved so difficult that the UK government had to step in and offer indemnity. Minister for Culture, Ed Vaizey, jokingly introduced himself at the opening dinner as the “insurance agent”.

David, 7th Marquess of Cholmondeley, Walpole’s descendent and current owner of Houghton Hall, said he was “amazed” that the exhibition had actually happened. When Mr. Morel first suggested the idea three years ago, he had said; “I can’t imagine the Hermitage … lending to a private house in the wilds of Norfolk, but we can try.”

To Lord Cholmondeley’s surprise, “we had immediate support from Mikhail Piotrovsky and it’s really thanks to him and his marvellous curators that we are here today.”

The exhibition bodes well for the Russia-UK Year of Culture announced for 2014. Mr. Piotrovsky told RBTH: “Britain and Russia showed … goodwill to solve some of the most complicated problems in the art world.”

He said he had visited Houghton Hall 10 years ago, “so I knew what we were talking about … we had negotiations, step by step, and got the papers that enabled us to feel secure.”

Corporate sponsorship has eased the cost of transport and installation, but the Hermitage has not been paid for the loan of the pictures, participating in a spirit of “goodwill and cultural exchange.”

“Houghton Revisited” is open to the public at Houghton Hall, King’s Lynn, Norfolk, from May 17th until September 29th, 2013. For tickets and further information, go to: www.houghtonrevisited.com