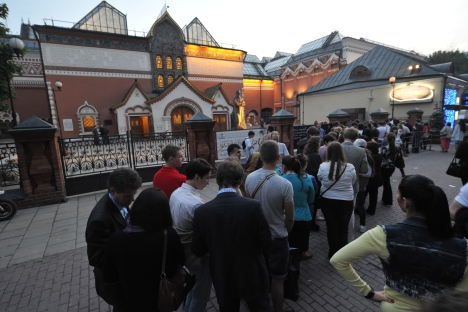 Museum Night is in its seventh year and more than 200 museums are participating.

Up to a million people will head to the streets of Moscow on May 18 in search of culture, stopping by museums, estates, squares and old factories that are opening their doors for free.

Museum Night is in its seventh year, despite often-frantic complaints about overcrowding. This year, it will be bigger and longer than before, as the day begins at 10 a. m. Saturday and stretches overnight till six in the morning.

It would probably take more than a year to visit all of the places open late this Saturday, let alone take part in everything happening. More than 200 museums are participating, and there will also be events in Moscow parks and squares, many of which have undergone makeovers in the last year or so.

Name a museum and it is almost certainly open: you can head to Kuskovo estate for a free concert, take a nighttime cycle ride till 2:30 in the morning, do breathing exercises in Krasnaya Presnaya Park, watch a concert battle between a jazz and classical orchestra by the fountain in Gorky Park, wander the halls of the Tretyakov Gallery until the clock strikes midnight and then catch Austrian DJs at Manezh Exhibition Hall until 5 in the morning.

The first part of the festival is the Day of Cultural Heritage, which is technically separate from Museum Night, when most museums will be free to enter.

Organizers say that they have put new measures in place to try ensuring fewer lines. Anyone wanting to go along is advised to visit the site and book a free ticket to a museum ahead of time. This should get you in ahead of the queues, said spokesperson Vlada Chubar.

As part of Museum Night, new public art will also be set up on Manezh Square, by the Multimedia Art Museum on Ulitsa Ostozhenka and by the Cosmonautics Museum at VDNKh. The winners of a competition to select the street art were set to be announced late Monday.

Volunteers will be on hand to report back on how busy venues are, with updates posted to a map on the Museum Night website.

"The symbol of this year is a hare from Philippe Parreno's project ‘Invisible Boy,'" said city culture head Sergei Kapkov, RIA Novosti reported. The hare is everywhere on the site of the night, which features an interactive map of all the events. Sadly, it's only in Russian.

Museum Night officially begins at 6 p. m. with a museum carnival that will set off from the Gallery na Solyanke in Kitai-Gorod before heading down to the State Tretyakov Gallery.

Events have also spread to the Moscow region for the first time. Three bus routes have been set up to trace a path along museums on the Garden Ring, museums in southwest Moscow and estate museums. They run till midnight.