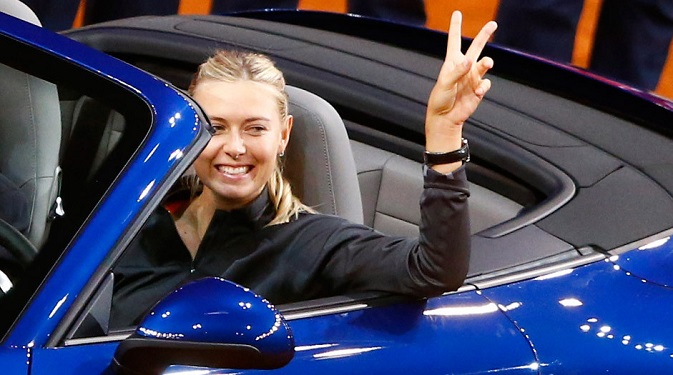 Sharapova: "When I win the match point and the whole match, the feeling just cannot be compared to anything else in the world." Source: Reuters

The international tennis sensation talks to Kommersant about the on-going WTA season, her playing career and her forays into business.

In the current season you have already won two important titles, in Indian Wells and Stuttgart. You have played twice in the finals of the Premier-category tournaments, in Miami and Madrid, and reached the semifinals in the Australian Open. Are you happy with these achievements?

I've had better runs. I had my best start to a season in 2008, when I won the Australian Open. But on the whole, I am satisfied. I am free of injuries, my shoulder is not troubling me - and that is the most important thing for me after the injury which put me out of the game for a long time in 2008. I want to play, and I want to win.

You have a positive balance of wins and losses against almost all the top tennis players. The only exception is Serena Williams: out of your 15 encounters with her, you have lost 13. Last week she left you no chances in the final in Madrid. What is her special skill that helps her wipe out not just you but all the other tennis players as well?

The thing is, Serena is very strong physically. And she always keeps the level of her game very high. A match can last two or three hours, so the most important thing is to keep the level of your game up for as long as possible – and her level is very high. Everyone's level drops off from time to time during the match, and Serena is no exception. But she overcomes those drop-offs quicker than the others. And then, of course, it's the way she serves. That is a very dangerous weapon in her hands.

Before Madrid there was Stuttgart, where you defeated Li Na in the final. You probably wanted to win really bad against her, because she is the one who knocked you off in the Australian semifinals.

I really don’t like losing. And if I lose, I always want to beat the opponent the next time. So it was of course very fortuitous that I won against Li Na in the decisive match of the tournament.

This was your second victory in Stuttgart. Apart from the prize money, you have won another Porsche. How are you going to use the two Porches? Drive them on alternate days?

The car I won last year is now in Florida, where I live. I really like it, this is the car I drive every day when I’m there. I have yet to receive the second car for my victory this year. I don’t really need it yet, anyway. I haven’t been back home since then. When I am back in Florida, I will probably use the new car. Incidentally, only just recently I signed a contract with Porsche. I am now their Brand Ambassador.

What were the most memorable moments of your career?

My first Grand Slam victory, of course. It was back in 2004. I was 17 years old when I beat none other than Serena Williams herself in the Wimbledon final. Another one is my Roland Garros win last year, after I had finally overcome a serious shoulder injury.

Have you thought of ending your career? And what are you plans for when that happens?

(Laughing) Yes, I have thought about it. I want to become a businesswoman. It was actually on business that I was in Moscow. On April 29, I launched a new brand of candies in Russia, called Sugarpova.

How did you come up with the idea of creating your own brand of candies?

The thing is, I really like candies - especially gummy candies. Two years ago I launched the production line. And I would like to stress that this is my own personal business venture, I have no partners.

Do you have enough time for this business?

I don’t have a lot of time on my hands, of course. But I have a good team who take care of these things. Still, I am in control of my business. I am always in the loop. I have even studied the gummies market and found that there is no premium brand in this segment. Most of the existing suppliers just make identical candy in similar wrapping, aimed primarily at kids. The Sugarpova brand was created as a higher-quality and more expensive product for adults. The brand was unveiled in August 2012 in New York. The first batch was completely sold out within the first two weeks of sales. Within the first six months of the launch we had begun sales in the United States, Canada, Australia, the UK, France, and the UAE. More than 200,000 boxes were sold in the United States alone in the first six months.

Well, I am coping, as you can plainly see.

You have won almost all the titles that are out there. How do you manage to keep up your hunger for victory?

I just love tennis, and I like winning. When I win the match point and the whole match, the feeling just cannot be compared to anything else in the world.

What did you think about the London Olympics? Are you going to take part in the Rio Olympics as well?

I really want to go to Rio. As you know, I took silver in London; I lost to Serena Williams in the final. I hope to win gold in Rio. That is why ending my career before 2016 is not something I would even contemplate.

And what about the Winter Olympics in Sochi in only nine months’ time? Are you going to be there? After all, Sochi is almost your home town, in a sense.

Yes, you could say that. Sochi is where I began to play tennis. This is where my family lives. I am sure I will be there for the Olympics. I am even going to miss some tournaments so as to be able to go to Sochi; the Games will coincide with large tournaments in Doha and Dubai.

You were only eight years old when you joined the Nick Bollettierri Academy in Florida. Was it easy for you to adapt to a new life, in a new country?

It was difficult at first. I lived in a single room with two other girls who were much older than myself. We never became friends, probably because of the age difference. There was also the language barrier. My dad, who took me to America, then found a job. It was a two-hour trip to the Academy for him. That is why we saw each other only about twice a week. My mom couldn’t get a visa, so I lived without her for two years.

Do you have any friends among other women players in the WTA Tour?

You know, it’s very difficult for tennis players to have that kind of relations. WTA players seldom become friends with each other. For example, I just cannot imagine going out for a dinner with one of my fellow tennis players, knowing full well that tomorrow I will have to work my socks off to defeat her on the court. Out there on the court, every woman tennis player is my rival, first and foremost - a rival I must beat. So I have women friends, but they are not tennis players.