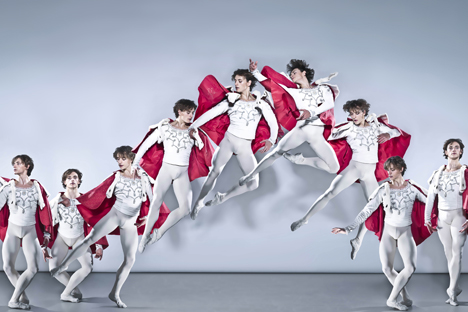 Sergei Polunin had become the youngest principal dancer in the history of Britain’s ballet. Source: PressPhoto

The 'enfant terrible' of ballet Sergei Polunin recently vanished from the London stage. But will this glittering talent mature into a real star?

It was the highest-profile ballet defection since Rudolf Nureyev slipped the surly bonds of Soviet servitude at a Paris airport while touring Europe with the Kirov in 1961.

However, when a 22-year-old Sergei Polunin dropped the bombshell in January 2012 that he was quitting London’s Royal Ballet at the height of his powers, it wasn’t for political or ideological reasons.

In fact, it wasn’t even clear where Polunin was going, let alone what he was going there for.

And, while it was journalists and ballet aficionados rather than KGB heavies who were soon hot on the Ukrainian’s trail, in April this year the plot took a new twist that recalled the days of the Cold War.

Signed to perform in the London premiere of Peter Schaufuss’s Midnight Express, Polunin walked off the London Coliseum set without explanation days before opening night, and promptly vanished.

So why would the man, who at 19 had become the youngest principal dancer in the history of Britain’s largest ballet company, apparently throw it all away?

Were the stories of drug abuse – some instigated by Polunin himself in interviews – true? Was he approaching a moment of crisis – physical, artistic, mental or pharmaceutical?

A need for freedom

Friends and fans watched with trepidation as the wilder elements of the Polunin story emerged: a self-professed desire to quit ballet at the age of 26 (or 28 depending on who he was talking to); self-comparisons with Alexander the Great; lurid accusations that there was a “British mafia” at Covent Garden, which discriminated against Russians and stifled him in particular; and his acquisition of half-shares in a London tattoo parlour – supplemented by a Beckhamesque addiction to the body art.

As the rumour mill swung into overdrive, Polunin resurfaced in Moscow later in April at the Stanislavski and Nemirovich-Danchenko Academic Music Theatre, where he now seems much happier under the watchful gaze of friend and mentor Igor Zelensky.

“What’s great about the Stanislavski is that I have Zelensky the director above me, and that’s the only person I’m dealing with – so that’s a lot of freedom I have as an artist,” says Polunin, betraying his obvious frustration at the confining nature of his life at the Royal.

“Zelensky helps me – he is interested in helping you make your name, to make you a star.”

This apparent need for freedom and recognition above and beyond that afforded by the company cropped up again recently.

“In Russia, no one takes any notice of what people without status think, but in London their opinion is valued,” he said, after being run to ground in Moscow by Izvestia.

“The system is built on the fact that they are a team and there are no separate individuals. In human terms that’s good, but in the end it’s not good for art. They often keep a talented artist at the same level as everyone else; they don’t let them show what they can do.”

Audiences are always attracted to charismatic loners and risk-takers but when rugged individualism tips over into conceited self-obsession, performers can quickly become objects of derision for colleagues and the public.

View the gallery: "Dancing Petersburg", in the rhythm of coming summer

So what do we have in Mr Polunin: deep-thinking artistic genius or spoilt brat? The answer is: probably neither. Because even when pleading his case of one rule for me and another for the rest, what comes across is his total commitment to his art, to pushing boundaries and reaching new levels of excellence.

He’ll take the adulation, of course; but he’ll deliver the goods in spades, too

Polunin gives the impression of a man unhappy in his art; of needing, in the words self-destructive Sixties rock poet Jim Morrison, to “break on through to the other side”.

And why shouldn’t he complain about his “British mafia”? About how great Russians such as Nureyev, Zelensky and Irek Mukhamedov are sucked dry by the Covent Garden machine, then unceremoniously spat out when surplus to requirements? Paranoid?

Perhaps – but on the international ballet stage even paranoids have enemies, a state of affairs borne out in January by an acid attack on the Bolshoi’s artistic director Sergei Filin, allegedly organised by company member Pavel Dmitrichenko.

As for the Midnight Express debacle, the simple fact is that Polunin may not have known enough about the ballet before he took the role. “I know there’s going to be blood and screaming and real dancing,” he gushed before rehearsals.

“But I’m not sure exactly what it’s going to be.” Perhaps “artistic differences” were really all that lay behind the vanishing act, although he could have handled everything so much better.

But then we are talking about someone who, in the words of former Covent Garden principal and former Polunin dance partner Tamara Rojo, is “more intelligent than he is educated”. Ballet’s enfant terrible, who has confessed to finding rehearsal “boring”, may just be indulging in a bit of old-fashioned, if belated, teenage rebellion.

After all, it can’t have been easy for a kid from the tough shipbuilding town of Kherson in the Ukraine. Groomed for success from an early age by a determined mother while his father worked in Portugal to pay the ballet fees, his journey could have been drawn from the script of Billy Elliot.

The intensity of his formative years of gymnastics and then ballet – beginning in Kiev and continuing at the Royal Ballet from the age of 13 – has left him feeling resentful about a childhood sacrificed to the performing arts.

“I would have liked to have behaved badly, to have played football,” he said recently in a wistful moment of reflection.

So what now? Polunin has never hidden his desire to act, and he has already embraced the fashion world having starred in a short promotional film for Dior Homme. A TV documentary about him is in the pipeline, and he maintains he is on good terms with Royal Ballet director Kevin O’Hare.

Thankfully, the desire to quit in his 20s seems to have abated. “If I get past that mark – 26 years – I’ll carry on dancing to the end,” he says, slipping seamlessly from the sublime to the ridiculous. “I’ll prove it is possible to perform at a good level even at 50.”

Polunin’s talent has never been in question. And having garnered favourable comparisons with those luminaries of 20th-century ballet Nureyev and Mikhail Baryshnikov, he may yet mature into one of the most charismatic and exceptional dancers of the modern era.

And London’s loss is Moscow’s gain – a fact reinforced in February when Polunin returned to Covent Garden to dance Frederick Ashton’s Marguerite and Armand with Rojo – to an ecstatic reception and rave critical reviews.

In the words of the Telegraph’s Sarah Crompton: “Polunin’s talent doesn’t just lie in the elegance of his arabesques, the speed of his pirouettes, or the height of his jump – all of which are fully displayed here – but in the way he can make you believe he is living the part he plays.”

But something has changed in Polunin, the essence of which is perhaps best captured by fellow dancer and friend Ivan Putrov.

“Often people in the arts, not just dancing, close themselves to only what they do and look just in one direction,” he says. “They never look out and never explore and so they become claustrophobic.

“It’s one of the hardest things to stay free and open, and maybe that’s what Sergei is doing – which is wonderful.”

So, for the moment at least, the ballet world might just have to cut Polunin a little slack, as this brilliant, beguiling and bewildering dancer attempts to find his feet as a free agent. Whether or not those strong, agile feet turn out to be made of clay remains to be seen – but at least he’s sold the tattoo parlour.