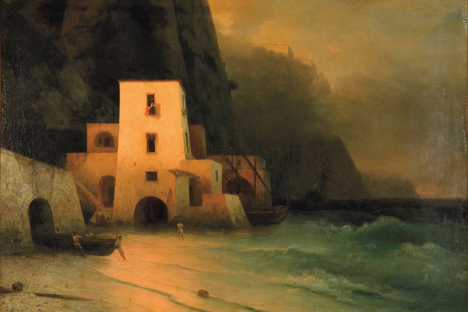 Fishermen on a Moonlit Coast by Ivan Aivazovsky, the master of dramatic ocean light, for auction during Russian Art Week at Christie’s. Source: PressPhoto

This year's Russian Art Week in London will be taking place in June. Christie's, Bonhams and MacDougall's are expected to put on sale a rich selection of works by the famous Russian painters Konstantin Korovin, Nicholas Roerich, Ivan Shishkin and Ivan Aivazovsky.

The puddles in the muddy forest track reflect a copper gleam from the fading sunset behind the pine trees. Ivan Shishkin’s evocative Twilight, for sale at MacDougall’s auction house on June 5 is a classic of late 19th-century Russian landscape painting.

Pavel Tretyakov, the collector who founded a gallery and inspired the realist group known as The Wanderers, famously demanded: “Just give me a muddy puddle and make it true to life.”

Shishkin is enduringly popular. His three bears, climbing on a fallen tree in Morning in a Pine Forest, have adorned countless Russian trays and chocolate boxes and his paintings regularly sell for more than a million pounds.

Auction house director William MacDougall says: “We expect to break at least one record, as happens almost every Russian Week.”

MacDougall’s is hoping Mikhail Nesterov’s Wayfarers, Beyond the Volga could fetch £3 million ($4,5 million); the two ethereal figures on a solemn pilgrimage by a clouded Russian shore are typical of the artist’s haunting combination of realistic scenery with religious imagery.

Mr MacDougall tells RBTH that the painting is “one of the most significant works by Nesterov that has ever come up on the market. Dated 1922, it is a development of the artist's famous Wanderer compositions… these paintings are a summation of Nesterov’s quest to find an image of the Russian Christ and represent the peak of his mature oeuvre.”

This year’s landscapes also include impressionistic sunny birches and glowing boulevards by Konstantin Korovin, and moonlit fishermen on the Italian coast from the master or dramatic ocean light, Ivan Aivazovsky.

Aivazovsky set a new record last year when Sotheby’s sold his luminous View of Constantinople and the Bosphorus for more than £3m. Bonhams has also broken records: they sold Vasily Polenov’s He That is Without Sin for £4m in 2011.

“London is close to Moscow; it is a leading financial centre with good schools, property and a favourable tax situation,” she says. “Also our customs laws are less stringent for cultural objects.”

She adds: “It is incredible to think that just over 10 years ago, Sotheby’s Russian painting sales only made around £4 million ($ 6 million) a year and that by 2007 the market had grown to nearly £100m.”

In 2010, Christie’s sold a painting by avant-garde artist Natalia Goncharova for more than £6.5 million ($9 million), the highest price ever for a work by a female artist at auction.

Ms Clarke says: “In April this year a sketch by Goncharova sold from Mark Birley’s collection for almost five times the estimate. She’s still the most expensive female artist at auction.”

One less-famous artist to watch out for is Alexander Volkov; his 1926 Child Musicians could be a good investment.

Sophie Law from Bonhams says: “Alexander Volkov is an incredibly interesting artist… the father of the Oriental avant-garde and yet in spite of his importance in Russia… his works are little known in western Europe… [they] are interesting fusions of western modernism and Central Asian art and life.”

Christie’s is selling a 1934 still life by Pyotr Konchalovsky which is reminiscent of Cézanne. Konchalovsky was a founding member of the innovative Jack of Diamonds group; Ilya Mashkov’s vibrant Still Life with Fruit, from the group’s first exhibition, is expected to fetch more than £1 million ($1,5 million). Christie’s sees it as part of a “distinctly national” wave of modernism.

Mr MacDougall says: “Russian Nonconformist Art is on the rise again, following the success of the Tsukanov collection exhibition at the Saatchi Gallery.” A number of works by “unofficial” Russian artists, such as Oleg Tselkov, Alexander Kharitonov and Oscar Rabin are up for auction this summer.

Icons, sculpture, jewellery and porcelain are on offer, too. One interesting piece is Spring, a glazed, earthenware bust by the visionary Mikhail Vrubel. Spring in Russian folklore is the mother of the snow maiden, Snegurochka.Spring is for sale at Christie’s on June 3.

There are drawings too, including a characterful sketch that Ilya Repin made on a train.

Ms Clarke’s guide lists all the sales, events and exhibitions. She says: “I realised if you are a collector coming from Russia, there was no central place to find all the information on what was going on. So I decided to set up a new online platform for Russian Art Week.”

She sees a promising future for the art market: “The last Russian Art Week in November made more than £43 million ($65 million) in just a few days of sales. Art is being seen by high net-worth individuals as a good alternative investment given the eurozone crisis. As a result, buyers want top-quality works with a good provenance, which is what the main auction houses offer.”

This summer’s auctions contain some remarkable works by the early 20th century Russian painter, writer and philosopher, Nicholas Roerich. A spectacular 1925 mountain-scape from the  series Sanctuaries and Citadels is expected to realise at least £500,000 at the June 5 sale at Christie’s. Bonham’s are presenting Roerich’s elusive 1931 painting Madonna Laboris.

Recently  unearthed in a private collection, it is one of a series of paintings on the theme of “Great Female Deities of the World”.  Yelena Harbick, Bonhams’ director of Russian Art in New York, calls it “a work of exceptional artistic merit. A large-scale, balanced and harmonious composition, rich and saturated tones of turquoise… and fiery-red accents, create… long-lasting memories for anyone who sees it.”

MacDougall’s also has a Roerich to get excited about. Director William MacDougall describes Banner of Peace as “the painting of a symbol of the cause that earned Roerich the nomination for the Nobel Peace prize in 1929”.

Details of all this year’s sales can be found on the websites: