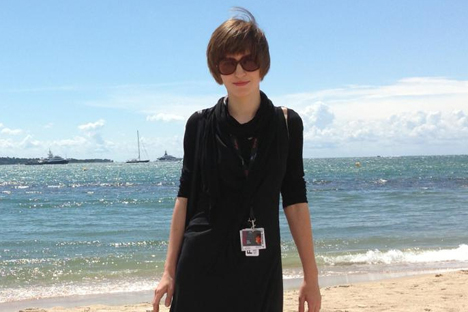 Film director Daria Belova from St. Petersburg, currently studying in Berlin, has been awarded the Discovery Prize at the Cannes Film Festival for her short film “Come and Play”. She talks about her film and life in the German capital.

The first results of the 66th Cannes Film Festival are in, with the Critic’s Week announcing its winners. The prize in the Short Film category went to Russian director Daria “Dasha” Belova for her film “Komm und Spiel” (“Come and Play”), which she completed as coursework for her studies at the Berlin Film School.

Izvestia: Congratulations, Dasha! My first question is actually more of a request – could you tell us more about yourself, because we’ve been given almost no information at all.

Prior to the Festival, all they mentioned was that there was a German film made by a young filmmaker of Russian background in the Short Film category of Critic’s Week.

Daria Belova: Actually, that information is way off; and I’ve been trying to correct it from the outset, but somehow I’ve not been able to. I’m not a “filmmaker of Russian background” – I’m a Russian filmmaker!

It’s just that I’m studying at the Berlin Film School mainly because, unlike Russia, university education in Germany is free. The filming all took place in Berlin, but it is shot in Russian and with Russian actors – it’s as Russian as it is German.

I’d really like to be considered alongside the other Russian participants at Cannes – and here I should mention that I loved Yuri Bykov’s film “The Major.” Fantastic! At future festivals, we’ll make sure the listing reads “a German-Russian production.”

Actually, we were hoping that Russians would have sussed that out for themselves; I’m pretty miffed that they didn’t.

Izvestia: How long have you been living in Berlin?

I realized that I wanted to work in films five years ago; but I’d already got my degree in Russia, which means that I would have had to pay for any further studies in Russia myself. That’s why I went to Berlin to study instead.

Izvestia: Did you know German before you moved to Berlin?

D.B.: I’d studied English and French, but not a word of German. They took me on, even though I didn’t know the language. The exams were tough – but they liked what I do. I learned German later.

Izvestia: Tell us about your film?

D.B.: It’s a black-and-white film, shot in 16mm, and it runs for 30 minutes. Basically, it’s a movie about memories of a place. The main character is a 10-year-old Russian boy who lives in Berlin and loves playing with toy guns – he kind of triggers the location. He falls into a bizarre and surreal dimension, which is essentially the city’s own dreams: dreams of the trees; dreams of the buildings.

It’s quite an aggressive environment, due to Berlin’s accumulated memories of the Second World War. Foreigners even say they see ghosts there. Strictly speaking, it’s a film about this city’s ghosts. The boy is a medium through whom Berlin transmits its memory. I think Leningrad [modern-day St. Petersburg], too, has much it would like to transmit.

Izvestia: Did the idea for the “dreams of a city” come to you while still in St. Petersburg?

D.B.: No, it began in Berlin. You know, there's a feeling there – you're sitting in a cafe, or a bar, then go out into the street and see its street-name, and remember the things that happened there in the past. You could be standing exactly where a line of tanks passed, where corpses were lying. And it's all continuing today in our memories.

Izvestia: Is this your first short?

D.B.: It’s my second. The first was called “Ballet Story” and it’s about a ballet academy. It was pretty successful: It was shown at 50 film festivals and won prizes in Italy, Brazil and Ireland; just five days ago it won in Ankara.

My second film, “Come and Play,” arose out of a seminar with my teacher, Fred Keleman. Fred’s a very well-renowned, German-Hungarian filmmaker and cameraman. He shot all of Béla Tarr’s last films, including “The Turin Horse.” He’s a superb teacher.

Izvestia: You mentioned that you’ve already had numerous offers from French producers?

D.B.: Yeah! It’s astounding! Film producers started approaching me after the first showing – French producers in particular. They said they loved the film and offered me work in France, involvement in international European projects.

I’d love to work in Russia – and in Germany, and France. One conclusion I came to pretty quickly: If you study in Germany, there are no borders. It’s really amazing!

Izvestia: So your approach is “I live where I work”?

D.B.: Sure! I have loads of friends in Moscow and St. Petersburg, and I’m always flitting back – but I’m going to be living where I can make movies.

Izvestia: What’s the subject of your feature-length debut going to be?

D.B.: I’m hoping to start work right away on a film in Berlin about the city today and what’s going on here right now. Berlin is a happy hunting-ground for creative people: You can do whatever the hell you like.

There are heaps of people ready to work for free, for the sake of an idea. It’s fantastic – especially in movies! In my film, for example, everyone worked for free.

Izvestia: So how much did it cost to make?

Izvestia: How come you shot the film on film stock and not in digital? And why 16mm?

D.B.: It’s because all of the wartime film archives and wartime footage was shot in 16mm. In “Come and Play,” we have a moment when the reality of our film merges with the realities of wartime movie archives.

We filmed it in black-and-white because it’s related to both classic war-movie and anti-war-movie filmmaking – not only Russian footage. It's like Tarkovsky, Klimov, or Rosselini...

My upcoming film will be in color, digital, with a mixture of documentary and playful techniques, featuring professional and non-professional actors.

It has two storylines – one of an Iranian boy, as handsome as a character from a Renaissance painting, who comes to Berlin, and we see how the city reveals itself to him.

The second storyline is of a Georgian girl. And the rest of it is “the meat” – the contemporary history of the city, its clubs, nightlife, theatres and artists. Half of the characters are actual living people who are significant within their own communities.

Izvestia: And what about a Russian-language project?