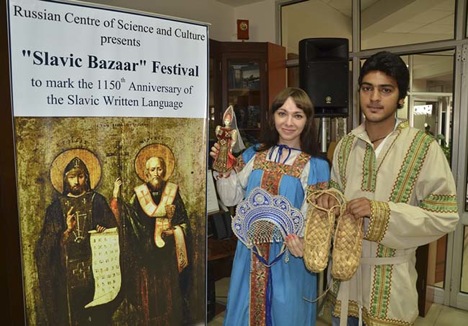 Various projects have been prepared on national and international levels. Source: Russian Embassy in New Delhi

The festival, held at the Russian cultural centre marked the 1150th anniversary of Slavonic written language.

Tracing the background of the event, Yelena Shtapkina, Deputy Director, Russian Centre for Science and Culture (RCSC), noted that the holiday is linked with the names of Saints Cyril and Methodius, who were considered to be the Enlighteners of the Slavic nations. “Their chief missionary feat was making the first Slavic alphabet in 863, used to translate the Books of the Holy Scripture from Greek into Slavonic. 863 AD is now considered the year of the origin of the Slavic alphabet”, she added.

This anniversary, a globally important event, is celebrated not only by Russia and Greece, but by the residents of all those countries visited by the missionary brothers Cyril and Methodius: Serbia, Bulgaria, Czech Republic, Slovakia, Ukraine, and other countries. On this occasion, various projects have been prepared on national and international levels.

Tatyana Perova, Head of the Centre of Russian Language Teachers Training narrated to the visitors the picturesque illustrations of the Photo Exhibitions “Enlighteners of the Slavic nations Saints Cyril and Methodius” and “Monasteries as centres of medieval literature, education and culture” displayed at the RCSC on the occasion. The photos displayed at the exhibition projected a clear picture of the genesis and evolution of Slavic writing and culture.

There was also a presentation on the “Culture of the Kievan Rus: costume, cuisine, fine arts,” Children’s Creative Camp “Folk Art and Crafts of the Slavic Peoples” and a workshop “Russian Folk Dance.”

The festival was capped by the screening of the educational animation film “The Alphabet.”