Behind the curtains of the new Mariinsky 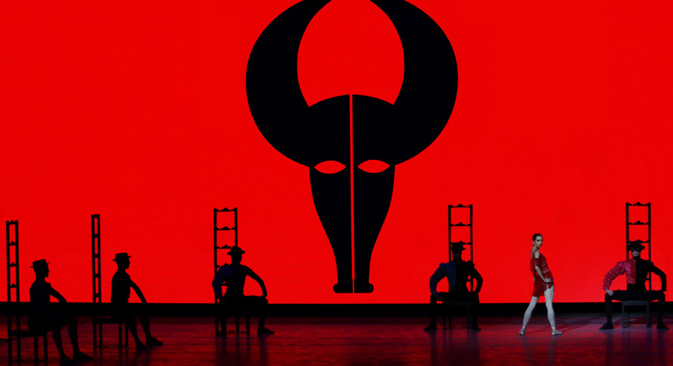 Diana Vishneva dancing Habanera from the Carmen-Suite during the opening ceremony of Mariinsky II. Source: RG

The new Mariinsky Theatre is a site of pilgrimage in St. Petersburg. Ballet and opera enthusiasts are coming in droves to witness first-hand the modern productions and admire the amber onyx encasing the concert hall. But what is going on behind the scenes? We went there to find out.

Tension onstage: the director, Vasily Barkhatov, issues the final instructions, the young blond gesturing wildly before staring earnestly into the eyes of his singers. With absolute concentration and focus, they carry out his instructions.

This was the last rehearsal to “Rusalka” – an opera by Alexander Dargomyzhsky that also opened the Stars of the White Nights festival on May 24.  Barkhatov’s singers had but a mere three weeks to practice.

“Of course it is a huge honor to inaugurate the new stage with my premiere, but it is anything but easy to be the first,” said the director.

This was an obvious reference to the fact that, at the time, they had not yet mastered the sequences and required more time to really use all of the technical possibilities the new hall has to offer.

At the theatre’s official opening in early May, chief conductor Valery Gergiev proclaimed: “Many people want to take in a performance at the Mariinsky when they come to St. Petersburg for the weekend, but the tickets are usually sold out days in advance.”

“For precisely this reason, to give even more performances, it is essential that we have a second theatre,” Gergiev said. “Furthermore, the Mariinsky could not afford to close its doors for days on end to set up elaborate stages needed for productions such as Wagner’s ‘Der Ring des Nibelungen.’”

In the new Mariinsky, there are three separate stages that can be used simultaneously. Simply by pulling a lever, a new stage can be in place within five minutes – and all without making a sound.

As executive producer Boris Yanukyan says: “Now we can position two stage backdrops at the same time, which means, at least theoretically, that we could hold performances of two different productions in a single day.” It has not happened yet, but it is a possibility.

Beyond the technology in place, there is something even more central to the unique vibe of the Mariinsky: the people; people such as Oksana Makarinka, 37, who has been running the tailor shop around the corner for three years.

Makarinka and her staff fashion costumes in a two-story building, in a rear courtyard just off of Matveeva Pereulok. Her 150 employees sew, stitch, color, wash and iron everything. For “Rusalka,” they put in overtime, working on the weekend to make sure that everything was finished in time for the premiere.

“Usually, we need two to three months for a premiere. During the festival, however, there are three premieres. So we’re working around the clock,” says Makarinka.

When observing the costumes, it is readily apparent just how great the financial resources are for the theatre, which, along with the Bolshoi Theatre in Moscow, is among the richest in Russia.

“Artificial stones do not possess the same shine,” Oksana says. “Therefore, we typically take glass stones by Swarovski. The difference between the two is incredible. The real thing glints much more majestically, and you can really see the difference onstage.”

One lady in the headdress department spent three weeks on the crown for “Rusalka.” Absolute luxury, you might say. But no expense is spared: This is the Mariinsky Theatre in St. Petersburg, after all. Some members of the staff have been here for 20 or 30 years.

Svetlana Nepeyovoda, for example, creates masks and has been taking care of the male soloists. Creating a mask, she says, is like painting a picture. “In film, you can select the characters afterwards, if they resemble the protagonist. For theatre, appearance is secondary to voice.”

Often, Svetlana has to make an older man appear younger, or vice versa, which is precisely what appeals to her: “That makes for interesting work.”

To the question of what has changed in the past 30 years, she replies, “It used to suffice to take the stage and sing. Today, however, everything has to be in motion, including the singers – which, for us, means that the makeup has to stick.”

The production’s protagonist, Irina Mataeva, plays Rusalka and is also in constant motion. She unflatteringly notes: “It is difficult to sing in the new Mariinsky, because the acoustics pose a challenge for us to find a balance. You exert yourself greatly, because you keep pushing yourself further and further.”

For many, the 21st century Mariinsky hits the high note in perfect pitch

The new space has its drawbacks to work with. There are plans to erect a 3-foot-high curtain to function as a sound barrier; otherwise, the singers may not make it to the final act.

Yanukyan, whose primary responsibility includes stage props, says: “The old Mariinsky is 150 years old and has its own energy. That energy does not yet exist in the new building. But every old building was, at some time or another, brand new.”

Yevgenia Pushkareva, a 26-year old chorister, says, “While it is true that the new stage feels cold, it is a fantastic opportunity for us to inject our energy and our music into it.”

During the Stars of the White Nights festival, which runs through the end of July, both singers and dances will have ample opportunity to do just that.