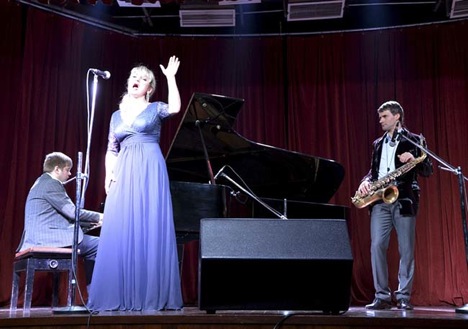 The event was organised by MTS India and the RCSC. Source: Russian Embassy in New Delhi

Concert held in India’s capital to celebrate the 20th anniversary of the establishment of JFSC Sistema.

A concert performed by the leading young jazz artists of Russia, Konstantin Gorbatenko (Piano), Dennis Shvyltov (Saxophone) and a bright opera-singer Maria Mazkhulia, left an audience in Delhi spellbound. The red hall of the Russian Centre for Science and Culture (RCSC) was packed to capacity on a blistering hot summer evening in the Indian capital. The event was organised by MTS India and the RCSC on the occasion of the 20th anniversary of the Joint Stock Financial Corporation Sistema.

Konstantin Gorbatenko, who played piano, is a participant of various jazz festivals, and winner of several international competitions such as “Dodje” and the Russian National Jazz Competition. He is also a pianist for the famous pop-rock band GianiRadari, nominated at the MTV Russian Music Awards.  Gorbatneko, who also the credit of being the musical director of the rock opera Parfumer’s, was in Delhi for the second time. In 2008, in the Year of Russia in India, he performed in New Delhi and Mumbai with the Russian Jazz Orchestra Fonograf Jazz Band.

Dennis Shvytov, who played the saxophone, is a laureate of the Russian Jazz Artists Competition, and played in the Oleg Lundstrem Orchestra. He is actively involved in many jazz events and plays with leading jazz musicians including Deborah Brown, Cynthia Scott and Jack Hamilton. Since 1999, he started cooperating with Igor Butman and in the same year founded his own group Pernatiy Zmey.

The vocalist Maria Mazkhulia, a laureate of Dvorak Contest in Carisbad (Karlovy Vary) is a soloist of “Helikon-Opera” Theatre. During the performance, Maskhulia presented a jazz and academic vocal. The Helikon Opera Theatre, one of the famous musical theatres in Russia, has always been trying to move away from the conventional and to surprise audiences not only with novelty and impudence, but with bright vocal and drama performance.