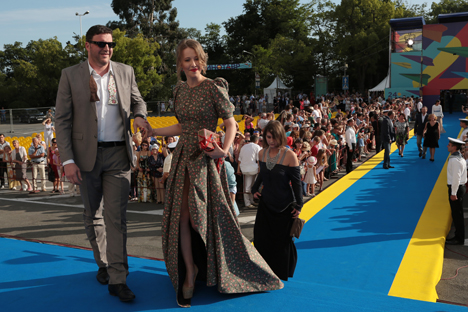 The Russian city of Sochi is taking a break from its Olympic preparations this summer to showcase the best young Russian filmmakers at the Kinotavr Film Festival, running June 2-9. Headlining the festival, Russia’s biggest, is President Vladimir Putin’s favorite film director, the veteran Stanislav Govorukhin.

The festival’s most anticipated premieres are all from young directors, and are very much in the arthouse tradition.

Alexander Veledinsky’s The Geographer Drank His Globe Away (Geograf Globus Propil) stars Night Watch actor Konstantin Khabersky as a high-school teacher in the city of Perm, while Andrei Stempkovsky’s The Delivery Guy (Raznoshchik) tells the story of a young man who delivers pizzas while trying to pay for his father’s expensive medical treatment.

Kicking off the festival at the June 2 Opening Gala was Weekend, Govoroukhin’s homage to French auteur Louis Malle. In Malle’s 1958 French noir thriller “Ascenseur Pour L’échafaud” (Lift to the Scaffold) – itself adapted from a pulp novel of the same name by Noel Calef – an ex-paratrooper teams up with his mistress to murder her industrialist husband.

The film was instrumental in inspiring the French “New Wave”, in which Malle was a key player.

In Weekend, whose screenplay was written by Govorukhin, the stage moves to 21st century Russia, but the film retains the aesthetics of Malle’s classic, being shot in atmospheric black-and-white.

Govorukhin is well known as a director of Soviet-era “people’s cinema.” Many of his movies (such as The Meeting Place Cannot Be Changed, Vertical and The Rifleman of the Voroshilov Regiment) are classics both with the public, and with President Putin, an avowed fan of Govorukhin’s movies.

Govorukhin even acted Putin’s campaign chief in the 2012 presidential elections.

Dmitry Konstantinov’s Farewell (Proshchaniye) is the closing film at the festival.

The Kinotavr Film Festival’s roots go back to the late Soviet perestroika period, when the so-called Festival of Unpaid-For Cinema, set up as a protest against vicious funding cuts made in the movie industry.

The event found support from within the cinema community, and in the early 1990s emerged as a national festival under filmmaker Mark Rudinstein and actor Oleg Yankovsky (later the president of the festival from 1993 to 2004).

In May 1993, it was decided to hold the festival annually in early summer, and Kinotavr became a state-funded event on a par with the Moscow International Film Festival.

Cinematryoshka: Taisia Igumentseva not to bite the dust at Cannes 2013

During the 2000s, Kinotavr went through extensive transformations, changing its owners (currently Alexander Rodnyansky, president of STS-Media, and Igor Tolstunov, general director of the Profit production company) and shedding its international competition program.

In an effort to promote homegrown movie talent, only Russian-language films now compete for the first prize, but the festival is becoming increasingly European in content and format. Kinotavr’s main festival program this year features 12 movies, as well as a program of short films.

The jury is comprised of renowned filmmakers, critics, actors, producers and cultural figures. The grand prize will be announced on June 9.