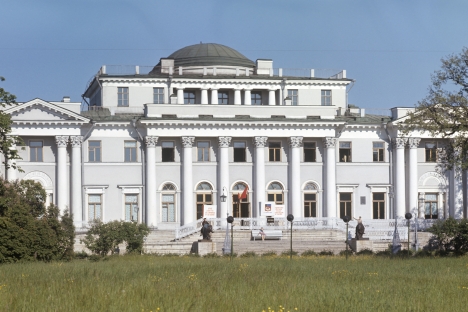 An extravagant ball for select guests of this year's St Petersburg Economic Forum will feature an environmental theme.

The 17th St Petersburg International Economic Forum (SPIEF), which takes place June 20-23, promises to be a memorable occasion – its guests will enjoy not only the famous White Nights, but also traditional Russian hospitality.

St Petersburg is no stranger to incredible influxes of visitors – every June thousands of delegates from all over the world descend upon the city for the annual St Petersburg Economic Forum. As always, guests at this year’s event can expect heated discussions on various economic and geopolitical issues, as well as a jam-packed cultural program.

Everyone will be able to watch yachts take part in a business regatta, enjoy classical music with Il Divo and a symphonic orchestra on Palace Square, and attend the Tsarskoye Selo Etudes charity concert. But not everyone will be lucky enough to get an invitation to St. Petersburg Governor Georgy Poltavchenko’s ball.

Invitations are given out by the Forum’s Organizing Committee to leading participants of the forum, from top government officials and CEOs to politicians and top economists.

The main guest at this year’s forum – and the Governor’s Ball – is expected to be German Chancellor Angela Merkel. President Vladimir Putin invited her personally during November’s intergovernmental consultations in Moscow. Her presence at the event, however, will only be confirmed a week before the forum.

Guests at last year’s Governor’s Ball were treated to a ‘Water Extravaganza’. Multiple silver-sailed platforms in the middle of the canal were the stage for ‘silver’ girl and boy dancers. Acrobats soared towards the sky on jets of water before landing on floating trampolines.

And Governor Poltavchenko made his entrance by boat. The art director of the event added a touch of the outrageous with his decision to have the children made up like “living statues,” a move that was discussed repeatedly in the press and by bloggers. The ensuing investigation, however, revealed no cases of abuse, and the fuss surrounding the incident died down.

“It’s just kids performing, like you’d see at any other event. It’s all been blown way out of proportion,” said Svetlana Agapitova, St Petersburg’s commissioner for children’s rights, in response to the public outcry.

The key artistic theme for this year’s Governor’s Ball is the “Tree of Life” – a symbol of the eternal relationship between human beings and their environment. Guests will be greeted by a large jazz orchestra of about 100 musicians, who will be seated in boats on the Malaya Nevka River. But the highlight of the program will be the performance by well-known Russian jazz musician Igor Butman.

The organizers of the event have promised a spectacular jam session, with solo and orchestral performances dedicated to the representatives of the countries participating in the forum.

Of course, no reception is complete without a gourmet dinner, the menu for which is selected with the same care and painstaking attention to detail that a TV producer would pay to the selection of clips for an entertainment program.

The event organizers have stated that it won’t be an “all caviar” affair this time around, but guests will be offered dishes that the most discerning of gastronomes would enjoy – and all at a very reasonable price of 3,900 rubles (about $130) per person.

Kramer & Co, whose director Viktor Kramer is best known for staging “Snow Show” alongside Russian performer Vyacheslav Polunin, has long been in charge of organizing receptions for the St. Petersburg forum. Kramer is a veteran of some 150 stage shows around the world, including The Golden Ballet, which was performed at the President’s Supper in honor of St Petersburg’s 300th anniversary in 2003.

All in all, 30 million rubles (about $1 million) will be spent on the Governor’s Ball, twice the budgets of 2009 and 2010 (16 million and 15 million rubles, respectively). That money covers the once-in-a-lifetime entertainment program, the interior design of the 3,000-square meter outdoor venue, and the security detail.

The main idea is to give guests a taste of that unique St Petersburg atmosphere – after all, Russia’s “Northern Capital” has for centuries been the epitome of everything attractive and unusual that is distinctly Russian, the cultural quintessence of the country.

And it is no mean task to present the city’s great past through the prism of the present day, to show the continuity of its cultural heritage, the fantastic opportunities of its future, and its avant-garde role for the whole country – all in one night.