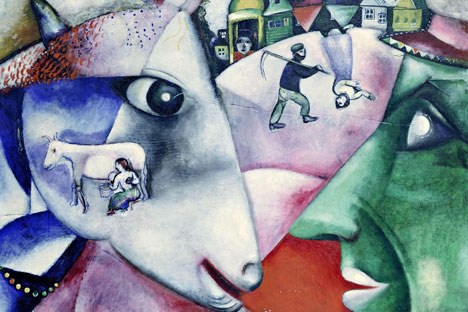 The Liverpool Tate hosts the biggest collection of the Russian artist's work in the UK since 1998.

'I and the village' by Marс Сhagall, 1911. Click to enlarge the painting. Source:© ADAGP Paris and DACS, London 2013. Photo © SCALA, Florence

Marc Chagall, one of the best-loved artists of the 20th century, is known for his innovative style and celebration of his Russian and Jewish roots.

Now a new exhibition, Chagall: Modern Master, in Liverpool’s Tate Gallery is charting the artist’s early journey from Vitebsk, where he was born, to Paris and back to Russia.

It is the first major exploration of Chagall’s work in Britain since the Royal Academy’s Chagall: Love and the Stage in 1998.

Paintings like “The Promenade,” a dream-like image of a couple standing and floating over cubist, green hills and a domed church, now have a pleasant familiarity in their strangeness. But the bright colours and child-like forms do not mean that Chagall is a simple artist.

The chronological arrangement of more than 70 works from museums and private collections around the world focuses on Chagall's most creative period, between 1911 and 1922. It takes in his early primitivism, his relationship with various avant-garde trends, his responses to war, and his enduring love of theatre.

Curator Simonetta Fraquelli says she hopes the new exhibition will “show how he was interacting with these movements and how he created a visual language of his own.”

Although Chagall never subscribed to any one artistic school, Fraquelli points out that as soon as he moved to Paris, his palette lightened, inspired by fauvist artists: “The earthy darkness of his early Russian pictures has been replaced with vermillions, crimsons, greens and ultramarines, which bathe the entire canvas,” she says.

Most contemporary of artists

A red-smocked man lies under a pointillist tree and smudgy clouds in “The Poet with the Birds," the first of many reclining poets, painted in 1911. The same year sees “The Green Donkey”, “The Yellow Room” and the mesmerising, kaleidoscopic “I and the Village”, borrowed from New York’s Museum of Modern Art for this show.

His paintings abandon naturalistic colour, scale, perspective and even gravity. Clearly influenced by the new artistic ideas sweeping Paris, Chagall rejected the formal confines of cubism: “Let them eat their fill of their square pears on their triangular tables,” he wrote in his autobiography. He saw himself as an outsider, “alone in my studio in front of my oil lamp”, seeking his own aesthetic path in the “logic of the illogical”.

Later, collages of gouache, graphite, ink, bronze paint and triangles of printed Cyrillic or Hebrew lettering, hint at more unexpected artistic influences. “He was looking at the constructivists and playing off them,” says Fraquelli.

Moscow’s Tretyakov Gallery has lent the Tate six intriguing wall panels, originally commissioned to decorate Moscow’s Jewish Theatre in 1920, as a centrepiece for the show. Based around the theme of a wedding feast, these exuberant paintings are full of acrobats and musicians, green cows and dancing women.

Ekaterina Selezneva, head of international cooperation at Russia's Culture Ministry, has contributed an essay about these murals to the exhibition catalogue. “The pictures represent an unprecedented contribution to the art of stage design,” she writes. “But even more importantly, they show how Chagall succeeded in broadening the potential of the Russian avant-garde.”

She quotes the theatre critic, Abram Efros, saying: “The Yiddish stage needed … the most contemporary, the most unusual, the most difficult of all artists. And so I mentioned Chagall’s name.”

Assistant curator Stephanie Straine praises the “amazing” cooperation from the Tretyakov Gallery: “They sent five painting restorers to Liverpool because the largest murals don’t travel stretched, but rolled up, so they have to be re-stretched by a team of specialists who travel with them.”

“They all absolutely loved Liverpool,” Straine adds, “and they understood how important it was to have the exhibition here. There has never been a major Chagall show outside London before.”

For more information, go to the website of the Tate Gallery

The Life of Marc Chagall

1887: Born Moyshe Shagal, eldest of nine children, into a Hasidic Jewish family in what is now Belarus, Chagall studies in St. Petersburg under the great Russian theatrical designer, Leon Bakst.

1911: Moves to Paris and paints fantastical memories of Russia, writing in his autobiography: “With these pictures I recreate reality for myself, I recreate my home.”

1915: After a successful solo exhibition in Berlin, Chagall returns to Vitebsk and marries Bella Rosenfeld, who becomes the subject of many of his most popular paintings. They stay in Russia through war and revolution and have a daughter, Ida.

1923 Moves back to Paris and, three years later, has his first exhibition in New York. The Chagalls emigrate to America in the 1940s.

1944 Bella dies and Chagall stops working for some months, then begins a new relationship with Virginia Haggard MacNeil and has a son, David. He still suffers homesickness for Russia, writing to Stalin for permission to have “live contact with the Soviet skies, soil and the people”. Several museums, including the New York MOMA, hold major retrospectives of his work.

1958 Having moved back to France a decade earlier, and worked in clay, he turns to stained glass, designing windows for cathedrals, churches and the Chicago Institute of Art.

1973 Revisits Russia at the invitation of the Soviet Culture Ministry. Moscow's Tretyakov Gallery stages an exhibition and Chagall signs the panels he made for the Jewish Theatre. In the same year the Musée National Message Biblique Marc Chagall opens in Nice.

1985 Chagall dies at home in the south of France.