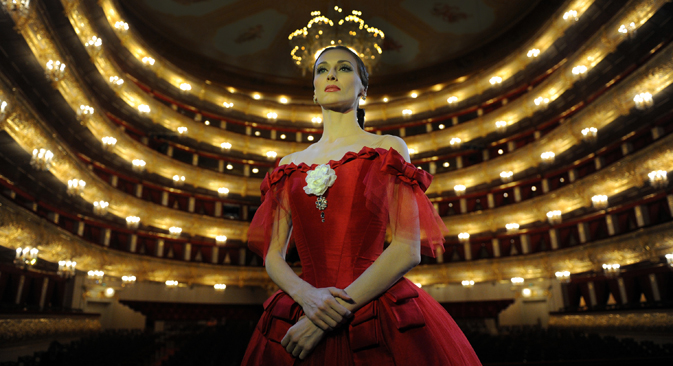 From the Russian avant-garde to psychedelic art, from Swan Lake to son et lumiere, from great Russian literature to television and constructivist architecture, the world would have been missing out on an essential part of culture — and, in fact, be a totally different place — if it had not been for Russia.

Here is an astonishing fact about contemporary art: It was actually invented by a Russian artist. In 1915, Kazimir Malevich painted his “Black Square,” which became a symbol and emblem of avant-garde art for the world. The work had an impact on all art movements, rather than on the plastic arts alone.

“Make something a cultural fact that no one had thought of before you,” is a concept that can be applied not only to Marcel Duchamp’s “Fountain” in 1917, but even to Arnold Schoenberg’s musical theory of avoiding recognizable forms and the mysterious silence of “4'33''” by composer John Cage.

In fact, there are a good many other places it can be found — from Dadaist Cabaret to the post-war Arte Povera.

Although Russian artists are not so prominent in a global context, Malevich alone would be enough to acknowledge Russia’s contribution to world culture.

Yet it should be noted that Vasily Kandinsky — a unique, self-made artist who, at nearly 40 years of age, traded the pulpit of an economics lecturer for a palette to become an abstract art founder and theorist — was also active in the same time period.

The third great Russian nonconformist who fits naturally into this constellation came to prominence a few years before the Russian Revolution of 1917 and exited the scene a few years after it ended. Konstantin Melnikov was recognized as the best architect in Russian history.

His life was as interesting as the buildings erected to his designs. Coming from a large family of a railroad trackman, he was lucky enough to be employed by a company of a rich engineer on the recommendation of a janitor.

In just a year, his patron had effectively adopted him; noticing the child’s unique talent, he let him study with his own children’s teachers.

At the age of 15, Melnikov entered Moscow’s leading art university, and, in the early 1920s, he became the city’s best-known architect. He continued building until 1936, with every one of his experimental designs creating a stir.

He rose to worldwide fame only to fall silent until his death. He had been proclaimed a “formalist” by Stalin’s regime, which was a label akin to a professional death sentence then.

Up until his death, Melnikov lived a secluded life, producing architectural projects “for the desk drawer” in an astonishing mansion in the center of Moscow — an unheard-of luxury in the Soviet Union — designed in the form of two intersecting cylinders.

If you ask a well-educated foreigner what they know about Russian culture, they will probably start by mentioning Russian literature of the 19th century.

Europeans will most likely remember something about Leo Tolstoy’s novels, while Americans will usually bring up Fyodor Dostoyevsky — and keen theatregoers are certain to say a few words on Anton Chekhov’s theatrical legacy.

Paradoxical as it may seem, Russian tradition completes the list with two or three more seminal authors of similar magnitude who are far less known in the West.

It is more-or-less clear with Alexander Pushkin, who in the space of a quarter of a century almost single-handedly “translated” (or, to be more precise, “adapted”) thousands of years’ worth of Western literature.

From the Antiquity to contemporaries and the Russian cultural background, Pushkin reshaped the established European genres to add some national features.

A recognized genius in Russia, his work remains the epitome of language and style for Russian readers, while it is far too dense to European ears: For them, a writer that has managed to cram tens of different periods into one lifetime is curious rather than impressive.

It is not so clear with the distinguished masters of satire — Nikolai Gogol(“Dead Souls”) and Nikolai Leskov (“Lefty”). Their works, rich in everyday scenes and psychological detail, preserve unique national features mingled with suspense and are a path to a much better understanding the mysterious Russian soul.

It is a path that only Russians know, since, outside of Russia, their names are of interest only to scholars.

The main reason behind this could presumably be the very structure of the Russian language, which is rich in syntax and morphology. Both Leskov and Gogol extensively used play on words, and the sentences they produced could make even Marcel Proust jealous.

Although their novels are adventurous and thrilling in a good way, they lose much of their charm in translation and, in a sense, pale in comparison to the likes of Jean Cocteau or T. S. Eliot.

Still, even if the best examples of the melodious Russian speech are destined to fall flat on readers unless they master the language, they can still enjoy Russian music.

Understandable to everyone, Pyotr Tchaikovsky’s ballets and operas constitute an integral part of repertories used in leading theatres from Sidney to Boston; connoisseurs appreciate the forefather of son et lumiere Alexander Scriabin; while classical pianists cannot deem themselves accomplished virtuosos until they have performed several works by Sergei Rachmaninoff.

Among other things, Russia takes pride in its achievements in stage productions (remember the Diaghilev Seasons). Regarding the theory and practice of acting techniques, Mikhail Chekhov immigrated to the United States and brought it to Hollywood.

Thus, essentially, all actors are now using either the Stanislavski or Chekhov method. As far as cinematography goes, is there really a movie fan who has not heard of Sergei Eisenstein or Andrei Tarkovsky?

If we take a broader definition of culture, we must remember that television was first invented in the ancient Russian town of Murom by Russian-born inventor Vladimir Zworykin.

Even the psychedelic revolutions of the 1960s and 1980s were, to a large extent, thanks to Alexander Shulgin: an American chemist of Russian descent who is credited with the discovery of the lion’s share of mind-expanding drugs.