Culture
Alexánder Panov
based on Interfax 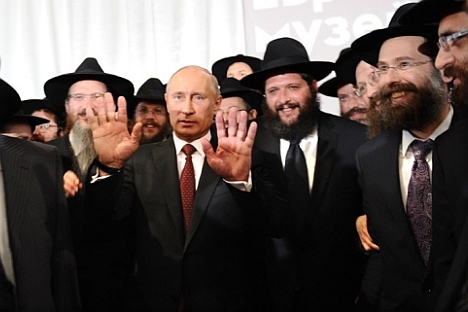 Russia's President Vladimir Putin (C) speaks at a ceremony marking the handover of the Schneerson library at the Jewish Museum and Tolerance Centre in Moscow, on June 13, 2013. Source: AFP / East News

Russia's chief rabbi Berl Lazar said the decision to transfer the Schneerson library to the Jewish Museum and the Moscow Tolerance Center is a wise one.

Lazar promised to do everything possible to ensure that the books can be accessible to many people.

"Today you have made an important step that I would even call a heroic deed […] Many languages have the saying 'Solomon's decision,'" lazar told Russian President Vladimir Putin during a visit to the Tolerance Center on Thursday.

Putin previously said the transfer of the Schneerson collection to the Jewish Museum and the Moscow Tolerance Center for storage purposes "will finally resolve the issue."

Lazar said Jews now feel comfortable in Russia, which is largely due to the presidential policies. He called the transfer of the library "a big day" for Jewish people.

"We will do everything possible to make these books accessible and resolve this issue for all people of Russia," he said.

Likewise, Putin hopes that the transfer of the Schneerson collection to the Jewish Museum will put an end to the debate on the collection.

"I hope transferring the Schneerson collection, which undoubtedly not only presents an interest, but is also a great value to Jewish people, and not only Jews living in Russia, but also Jews who live in other countries, to the Jewish Museum and the Moscow Tolerance Center for storage purposes will put an end to this problem," Putin said during a visit to the museum.

The president said any person visiting the center, regardless of his place of residence, can "study and hold in his hands these books and get from them the knowledge that modern people need so much."

Putin said these ancient books contain eternal values and eternal morals on which any civilized society is based today.

Boruh Gorin, the head of the public relations department of the Russian Jewish Community Foundation (RJCF), told Interfax-Religion earlier that several hundred books from the Schneerson collection will be transferred to the Jewish Museum in June.

All 4,500 books from the library will be moved before the end of this year, he said. Books from the Schneerson Library located in the Russian State Library are now being inventoried and scanned. There are plans to scan 500-700 books a month, Gorin said.

After the 4,500 books from the Schneerson Library are transferred to the museum, the manuscripts that have not yet been identified as books from this collection will be identified. That will require an evaluation. This stage of the project will probably being in 2014, Gorin said, adding that there are thousands of books that have indications of being part of the Schneerson collection, but have not been identified as such.