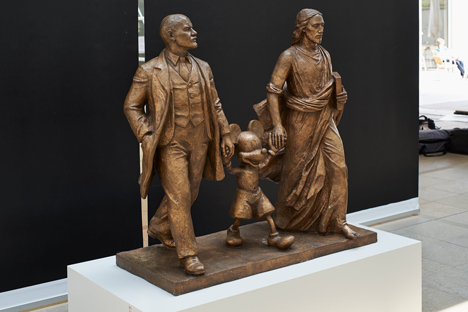 Sculpture exhibition brings the latest in Russian contemporary art to the Dutch capital as part of the Netherlands-Russia Year.

Visitors to The Hague this summer won’t be able to help noticing the latest trends in contemporary Russian art.

A bronze statue of Jesus walking arm-in-arm with Mickey Mouse and Lenin, and a 16-foot-tall bronze bulldog are only two of the items on display as part of the show “Russia XXI,” organized in the Dutch capital by the local museum Beelden aan Zee and the Russian National Center for Contemporary Arts.

Other pieces on display include trash bins symbolizing the Sochi-2014 Olympic Games and wooden deer in wooden boxes, intended to show communication between nature and humans. Thirty-seven Russian artists are participating in the show.

The exhibition was opened by Her Royal Highness Princess Beatrix on June 5. As part of the opening ceremonies, Vadim Zakharov’s sculpture “Monument of Utopia” was put into action. The head of the 10-foot-tall blue lion moved up and down with the help of special mechanism.

Contemporary Russian art draws on a wide range of inspiration. Some pieces reflect the legacy of the Soviet era while others evolved from a mix of abstract ideas, Russian imperial history, and modern society and politics.

The goal of the exhibit is to show the variety in contemporary Russian art. The works of Sergei Shekhovtsov, whose foam rubber sculptures can last a maximum of 30 years, appear alongside the solid bronze works of Zurab Tsereteli.

Dick van Broekhuizen, head of collections and publications at Beelden aan Zee, describing the art, said: “These sculptures represent not only art itself; they have a social meaning.

For example, the installation ‘Brilliant idea’ by Nikolay Polissky reflects communication in the Russian village. This huge construction was made in four days with the efforts of the inhabitants of the village Nicola-Lenivets.

This village still preserves its traditional way of life and the relationships between people are not the same as in the cities where people are very individualistic.”

Irina Gorlova, head of the art programs department at the Russian National Center for Contemporary Arts, said that even though the art is contemporary, it draws on history. “You can see the two main lines in the works of Russian artists.

The first one is connected to the Russian Avant-garde art of 1920-1930’s and the second one is mixing symbols of socialistic era and continuing experiment of ‘soc-art.’ Beneath one cultural layer, you can notice the background of controversial Russian history.”

The exhibition, which is the first large show of contemporary Russian sculpture in Holland, is taking place within the framework of the Netherlands-Russia Year.

Sculptor Shekhovtov, whose work “Free” – portraying a man jumping through a wall – is part of the exhibition, is happy to be taking part.

“I think that such a format of exhibition in open air couldn’t be made in Moscow and we need to learn from our Dutch colleagues’ experience in organizing city shows,” said Shekhovtsov.

Visitors so far are impressed. Said Caroline, a local resident: “It is really different from what we usually see in The Hague. For instance, the installation with seven sins looks scary and I don’t think that any Dutch artists would make this art object.”

The exhibit will be on display until Sept. 27. For more information, visit the website.