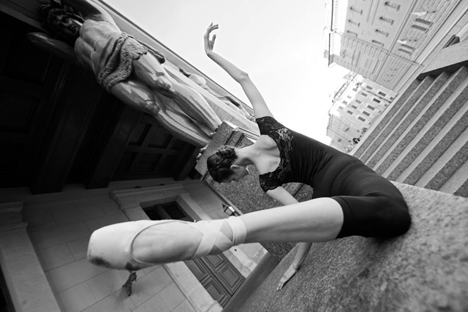 Italian photographer Simone Ghera brings the passion of dance into the cities of the world in a new photographic exhibition, “Dancer Inside" in London.

Static angles and lines could sound almost oxymoronic to ballet, but, for Simone Ghera, they marry architecture and dance in photography. A professional architect based in Rome, Ghera finds inspiration in exploring photography techniques.

He captures and brings out the rare unison of two different art genres in the “Dancer Inside” photo series, which is making its way around the world.

The London exhibition, which launched on June 18, is hosted by Representative Office of Rossotrudnichestvo in the United Kingdom – the first event a non-Russian, non-British artist has held in the Russian Institute in London.

This is no coincidence. The project was conceived and started in St. Petersburg, Russia, which is home to the leading dance traditions recognized and adopted across the world. 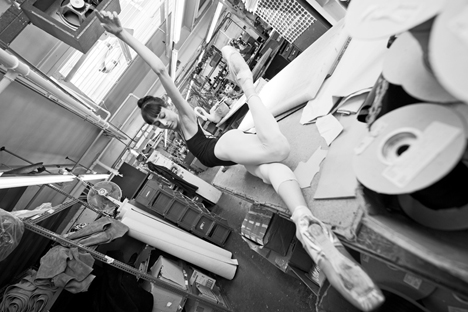 The first soloist of the English National Ballet at the London factory. Source: Simone Ghera

Inspired by the architectural lines of Kazansky Cathedral, Neva and Fontanka embankments, and the canals and bridges, Ghera found metaphoric resemblance to their harmony in ballet.

Since then, the master has been shooting ballet dancers in Madrid, London, Rome, Berlin, Paris, Florence, New York, etc., choosing iconic locations in each of the cities.

Camden Town in London, La Defense in Paris, Soho and Central Park in New York, Isaakievsky Cathedral and the Hermitage in St. Petersburg – these and many other sights are of cultural and historic value in their own right.

Yet their beauty is highlighted by the dancers, who, embedded in the architectural context, breathe movement into the static shapes. 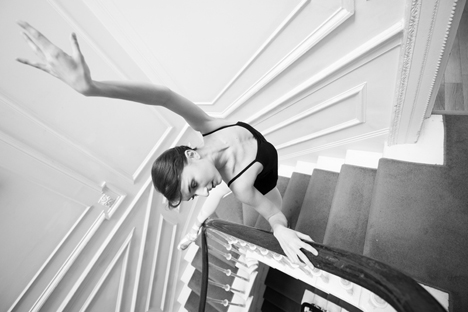 The subtle graphic interplay of the geometric forms of the structures and the dancers’ moves is what Ghera is after. “I don’t program anything,” he says. “I walk around, I see the place and I come back to shoot. It comes out naturally.”

Whether the dancer is the center of the composition, or the architectural background, the lighting and perspective tell a photo-story of their unison – mostly in black and white.

The dancers are universal, while the places are unique, says Ghera. The girls are hand-picked by the master in person, during the classroom rehearsals at the barre.

“The arms and the neck are key to the composition of the photo – this is very important to me,” he points out, admitting that classical dancers, who are not as used to improvisation as modern dance performers, might find it difficult to perform in the same manner later, during the shoot.

To more creative dancers it comes natural, while others would rather take directions from the photographer.

The project goes beyond mere visual effects. “The human touch,” in the architectural context, seems even more palpable in the photos with pregnant dancers. “I love it!” says Ghera. For him, their natural beauty and elegance add to the visual connection with the structures.

View the gallery: "Dancing Petersburg", in the rhythm of coming summer

Still, the concept behind the project is not easily acceptable for everyone. Elena Gabrielova, a former Bolshoi theatre ballerina and ballet teacher, shares her view of the challenge a classical dancer has to face to step out of the box.

“I don’t really like modern dance. In 1946, I joined the first post-war, classical ballet class in the Bolshoi theatre school; and, working in the theatre afterwards, I found it very difficult to master it. I felt modern dance was a parody of classics.”

More ready to accept it now and see the beauty in some productions, she praised the barre performance of the three ballerinas at the launch of the exhibition.

“These photos are very unusual: I’ve never seen anything like this before,” says Alexandra Fern, one of the ballerinas, as she explains the decision to take part in the project.

Trained classically in Central School of Ballet in Clerkenwell, where one of her teachers was Russian, she is now keen on trying out modern styles.

Fern shares the way similar shoots also help develop self-awareness with the dancers through improvisation. “You improvise until the photographer sees something and asks you to do that again. And it’s amazing how they capture something you would never think would look any good – but it turns out the best picture.”

One of Alexandra’s most strict classical ballet teachers was Russian, and it is not hard to follow Ghera when he says, “Russia is behind everything,” in the project.

Starting with the master’s much-loved series with the Mikhailovsky Theatre dancers, the “Dancer Inside” project will embrace more cities, more ballerinas and more architectural masterpieces. The beauty of classical lines and forms will speak the universal language of dance to the spectator.

The “Dancer Inside” London exhibition is free for the public and open June 18-25 at the Russian Institute of Culture (Representative Office of Rossotrudnichestvo in the United Kingdom of Great Britain and Northern Ireland), at 37 Kensington High Street, London W8 5ED.