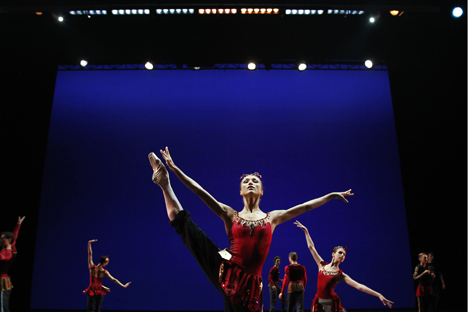 Dancers warm up before a rehearsal for "Rubies" staged by U.S. choreographer Sandra Jennings at the Bolshoi Theatre. Source: Reuters

For the upcoming season at the Bolshoi Theater, there will be more international stars – and, hopefully, fewer scandals. The great classic operas (“Cosi fan Tutte,”“Don Carlo,”“The Flying Dutchman”), so long acclaimed by the public, will be performed, as will the most famous ballets; but there will be no venturing into contemporary dance.

The Bolshoi will be maintaining the conservative policy it announced last year.

The directorship of Anatoly Iksanov, which has been marked in recent years by some significant scandals (embezzlement, the vicious attack on Sergei Filin and the dismissal of Nikolai Tsiskaridze), will win approval from the rather conservative Muscovite public, and as few feathers as possible will be ruffled.

The 238th season of the Bolshoi will start on Sept. 17. It will be hosting a number of well-known foreign companies while the resident Bolshoi company tours abroad.

Iksanov has promised to bring back to the Bolshoi’s historic stage the two greatest opera stars of the decade and long-time favorites of the public: Anna Netrebko and Dmitri Khvorostovsky. In which roles will they perform? This has not yet been revealed.

Franco-Russian relations will be particularly active this season, as far as choreography is concerned. On Sept. 21-24, the Opéra de Paris company will be dancing the pantomime ballet “Paquita” – a Spanish fantasy choreographed by Pierre Lacotte.

The French choreographer will return in November, this time to produce the Bolshoi’s production of the ballet “Marco Spada or the Bandit’s Daughter.”

The music for the ballet was composed by Daniel François Auber, who is “the most brilliant personification of French musical genius,” according to Ernest Reyer.

As a brilliant revivalist of the great French repertoire, Pierre Lacotte will offer a new version of a performance originally created for Rudolf Nureyev by the Rome Opera in 1981. Iksanov says the new version was necessary, on account of the size of the Bolshoi. The theatre will have exclusive rights to the ballet for five years.

At the very end of the season, in July 2014, it will be the turn of French choreographer Jean-Christophe Maillot to present his “Taming of the Shrew” – a ballet created especially for the Bolshoi company.

The theatre will also be hosting the United Kingdom’s Royal Ballet, who will perform “Manon,” “Raven Girl,” and “Dance at High Speed.”

In March 2014, the American choreographer John Neumeier will be presenting his “La Dame aux Camélias” in Moscow, which is certain to be one of the highlights of the season.

A last word about dance: Iksanov has announced the imminent return of the former child prodigy Alexei Ratmansky, who left for New York much to the chagrin of enlightened fans.

The dual bicentennial of the births of Richard Wagner and Giuseppe Verdi will be the occasion for the Bolshoi to stage two key operas from their repertoires.

“The Flying Dutchman” will be directed by the German Peter Konwitschny, as a co-production with the Bavarian National Opera. The cast will be largely international and will also include singers from the Bolshoi’s company.

Verdi’s “Don Carlo” will also feature internationally acclaimed voices, under the British director Adrian Noble. The opera will be performed in its longer, Italian version, rather than the usual French version.

Mozart fans will be delighted with a “Cosi fan Tutte” directed by the young Dutchman Floris Visser. It will certainly be the most innovative show of the season, perhaps alongside Stravinsky’s “Mavra” – the only 20th-century opera to be presented this year by the Bolshoi.