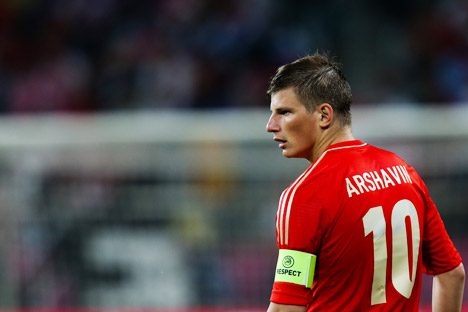 In 2008 Andrey Arshavin’s name was on everyone’s lips throughout Europe. Source: ITAR-TASS

The former captain of the Russian national team has signed a contract with his former club Zenit after a lacklustre conclusion to his foreign career – during the past year with London’s Arsenal he barely set foot on the pitch.

Andrey Arshavin has agreed the terms of his contract with Zenit. The agreement with the 32-year-old footballer, who has spent the last four and a half years playing for the London team Arsenal, will be for two seasons, with an option to extend it for a further year.

In 2008 Andrey Arshavin’s name was on everyone’s lips throughout Europe. He was a UEFA Cup winner with Zenit and one of the main architects of Russia’s third-place achievement in the Euro 2008 championships. Arsenal’s manager Arsène Wenger took a special trip to Switzerland to take a look at the Russian footballer. The St Petersburg supporters’ favourite gave the Zenit management what was virtually an ultimatum: if they didn’t sell him to Arsenal he would quit the game. The management was forced to give in, and did not try to wreck Andre’s future. On 21 February 2009 Arshavin played in a home game for Arsenal against Sunderland. Andrey became the Arsenal fans’ favourite after scoring all four goals in the away match against Liverpool.

But 2008 and 2009 remained the brightest years in Andrey’s career: in the next two seasons he didn’t manage to make much of an impression in the English Premier League. Arshavin failed to become the Gunners’ key player: a rapid loss of physical form gradually shifted him onto the London club’s substitutes’ bench. The Russian national team’s manager Dick Advocaat trusted his captain to the end, but after the failure in Euro-2012 even the most ardent admirers of his talent stopped believing in Arshavin’s superpowers.

Arshavin always had an ambiguous reputation among Russian fans because of his ambiguous and harsh statements. The journalists also had it in for him because of his constant refusal to give interviews. People were also irritated by Arshavin’s involvement in various advertising campaigns – an advert for crisps featuring him was notorious. The last straw was what the captain said after the national team’s failure in Euro-2012: “The fact that we didn’t live up to your expectations isn’t our problem: it’s your problem.”

The national team’s new manager Fabio Capello doesn’t see Arshavin as part of his plans, and Zenit is not guaranteeing him a first-team place either. The St Petersburg team’s coach Luciano Spalletti has already let it be known more than once that he’s not over the moon about the return of the prodigal son. So it’s back to square one for Andrey Arshavin – even at the age of 32.

In 2003 Zenit had still not tasted gold in the Russian league, but the club was moving steadily towards it. It was Arshavin who brought the St Petersburg team its first title in modern history, scoring a hat-trick in this match.

Winning the UEFA Cup was one of the most important moments in Arshavin’s career. Zenit was the second Russian club in history to win the second most important European club tournament. Arshavin didn’t score in this match, but was directly involved in both goals.

This game will stay in the fans’ memory for many years to come as the best match in the history of the Russian national team. Roman Pavlyuchenko opened the scoring with an accurate shot in the 56th minute. The Russian team held the advantage throughout the game, but four minutes before the end the Dutch striker Ruud van Nistelrooy equalised, and it was all back to square one. But Russia won the match in extra time. In the 112th minute Dmitry Torbinsky got on the end of Arshavin’s cross and squeezed the ball into the net – and was almost crushed by his madly celebrating team-mates. Four minutes later Arshavin himself wrapped it up and made the match against the Dutchmen history.

The high point of Arshavin’s career in Britain and the best match in his whole career was the match against Liverpool at Anfield. The match ended 4:4, and Andrey scored all four goals for Arsenal, each one more beautiful than the last. This was the first time in his career he’d achieved this feat, and moreover he was the first player to score four goals at Anfield for 63 years. After this game he became an idol for millions of Arsenal fans. Supporters from all over England travelled to London just to see him. He received declarations of love, he was worshipped, and even his rivals had to admit that he was truly great.