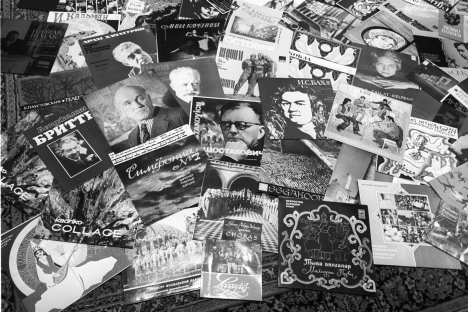 Melodia's main format used to be vinyl records, which went out of fashion for a while but are now back. Source: RIA Novosti

The Russian record label Melodia has published its archives online.

Ever since it was founded in 1964, the All-Union Gramophone Record Firm Melodia remained the nation's only mass producer and distributor of phonograph records for 25 years, until the mid-1980s.

Toward the end of perestroika, the label even started bringing out Soviet rock bands.

Melodia's main format used to be vinyl records, which went out of fashion for a while but are now back.

Meanwhile, production of compact discs is now going through a very rough patch, with CD stores winding down across Europe; Moscow is following the same pattern.

The major record label of the post-Soviet period, Soyuz, is selling out its stock as sales plunge. The era of downloads is with us and music has moved online.

When Melodia first made its digitized archives available for downloading from its online store, many users thought it was “too late for a wake-up call,” since much of what was on Melodia's records had already been posted online in torrent trackers, blogs or social networksfor non-commercial use; add this to the fact that pirates are as vigilant as ever.

Even ordinary users are prone to share their record libraries — and, as it happens, often completely for free. Yet again, much has already been published on CDs.

The project is certainly overdue, but there is more to it than just a nostalgic archive. First, the entire collection of Soviet-era music is now available from a single server, convenientlybroken down into categories.

The store takes responsibility for the quality of the recording, unlike the case with pirated music. In addition, Melodia generously provides an opportunity to listen to the records and purchase single tracks.

Audio. All That Folk: Back to basics

Many recordings have been restored. Moreover, and most important, this is now completely legal—a rare chance for Russian Internet users to download high-quality music without infringing on any copyrights.

Meanwhile, there are still certain difficulties: Currently, music can only be purchased from within Russia,though the label is planning to go global in the near future.

At the moment, payments are accepted in rubles only, but there are plans to cover all currencies and all payment systems.

Also, for the time being, recordings are offered in the not-too-convenient .wav format, which will later be switched for.mp3 and .flac formats. Much remains to be done, but the project is off to a good start.

The store's content, however, is a separate issue. For now, Melodia has only made available a small portion of it, to which it possesses exclusive rights.

They are now figuring out a way to deal with neighboring rights. “As it is, we can only sell the tracks to which Melodia has exclusive rights,” the record label's general director, Andrei Krichevsky, said.

“We have launched an online store to see whether it will be a success. If it works out all right, we will start making deals with other right holders — for tracks that are not entirely ours and there are other copyrights involved — and move toward making our entire archives available for sale,” said Krichevsky.

The archives include many classical recordings: Melodia used to record performances by Herbert von Karajan, Yehudi Menuhin, Glenn Gould and many other distinguished musicians on their tours around the Soviet Union.

The content proudly boasts the “Anthology of Piano Music by Russian and Soviet Composers” series, as well as collections of prominent soloists and bands.

Of course, Melodia only recorded performers who were officially recognized and naturally loyal to the Communist Party in power.

For example, Mstislav Rostropovich and Galina Vishnevskaya were immediately deleted from Melodia records after they signed an open letter in support of dissident writer Alexander Solzhenitsyn.

All That Folk: Back to basics

Censorship was severe. The Arts Council kept a watchful eye on the aesthetic tastes of Soviet citizens.

Nonetheless, 22 years later it has now turned out that, while “chanson,” independent rock and the most precarious and speculative popular hits are abundant, the music of the bygone Soviet era has become scarce.

It is a cherished memory, recognizable right from opening chords. It will never come again—which makes Melodia's archives so much more valuable.