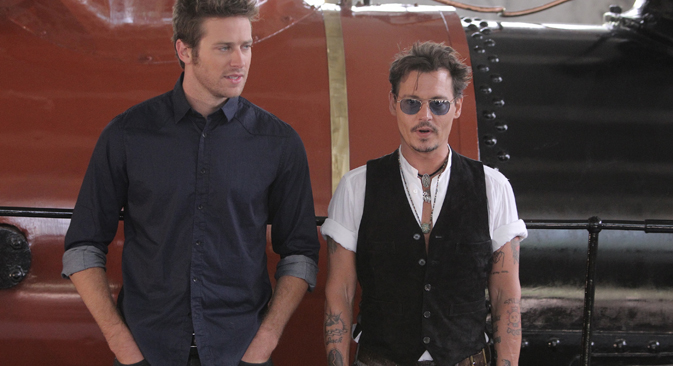 The Hollywood superstar says he would love to play Rasputin or Raskolnikov, and travel across Russia by train.

Hollywood Walk of Fame superstar Johnny Depp is not new to Russia: He visited Moscow two years ago on his tour of the “Pirates of the Caribbean: On Stranger Tides,”together with his beautiful co-star, Penelope Cruz.

“Russia has a serious history. My favorite writers and poets are Russian. So there are some places in Russia I would like to have a look at; but I never have enough time, since I come here with a crew, and they are always dragging me around on some important business,” Depp said at a news conference.

The actor would like to visit sites associated with his favorite authors: Fyodor Dostoevsky and the poet of the Russian Revolution, Vladimir Mayakovsky.

On top of that, Grigori Rasputin, the controversial advisor to the Romanovs (the last royal family of Russia), is his favorite historical character.

View the gallery: The best Stalin, Lenin and Rasputin performed by foreign stars

Depp would gladly accept the role. “Rasputin is certainly a very unconventional character — a surprising, curious one. The incredible story of the man's life is so powerful!” Depp said.

“I'd also say Raskolnikov — although I do understand that I'm a little too old to play the main character in ‘Crime and Punishment.’”

Even so, the 50-year-old Depp, appearing in the “Lone Ranger” as the Native American Tonto, barely looks 30. “I worked out a lot, had to work with my personal instructor.

It was really important for me to portray American Indians in an accurate and appealing way, to show them for what they have always been — fighters,” said the actor.

For the film, Depp had to perform some stunts on horseback and climb up to the top of a train traveling at full speed, or climb down underneath it... It is no wonder the crew chose the Moscow Railway Museum as the venue for a photo call, against the backdrop of old trains and locomotives.

“I'd really love to travel across Russia by rail,” Depp said, adding jokingly: “Just not on the rooftop, as in the movie.”

At the museum, Depp posed for a photo call with his charming co-star Armie Hammer, who performed the part of John Reed. It turns out that the up-and-coming 26-year-old star has a close connection to Russia: His great-grandmother on his father's side was Russian actress Olga Vadina von Rut, a daughter of Imperial Army Gen. Vadim von Rut.

His great-grandfather, in turn, was a famous millionaire of Ukrainian origin, Armand Hammer, who was respected by all Soviet leaders, from Lenin to Gorbachev. 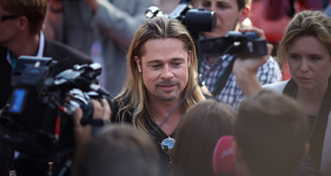 The two actors told RBTHthat the “Lone Ranger”had left them with a positive impression.

“It was really fantastic that we were granted permission to visit America's most mysterious places, where no one had been allowed to come, let alone shoot, for years. Native Americans were invariably welcoming and supportive wherever we went,” Hammer said.

Hammer also mentioned a funny incident that occurred while filming the movie: He accidentally fell into a cactus coming out of a bathroom, and it took him a month to pull out all the cactus needles.

“Don't worry, though, he did not fall forwards, he fell backwards; so, in that sense, he was not injured,” Depp said jokingly.

Depp himself recollected that he had to let scorpions crawl across his face in one scene: “They don't scare me at all. I tried putting one in my mouth, but it did not like that, so I had to let go. Clowns and mimes are what really scare me.”

As they headed for the Rossiya Concert Hall for the “Lone Ranger”premiere, fans were chanting hysterically “Johnny Depp! Johnny Depp!” His bodyguard literally held the actor in his arms, for fear that Depp might be torn apart by the crowd. Some of the fans, however, managed to get his autograph.

After the premiere, Depp met with his new girlfriend, Amber Heard, for dinner at a top-notch Moscow restaurant. The couple first became romantically involved when they were shooting “The Rum Diary,”based on the novel by iconic author Hunter S. Thompson.