Modern Orthodoxy in photos at the Moscow metro 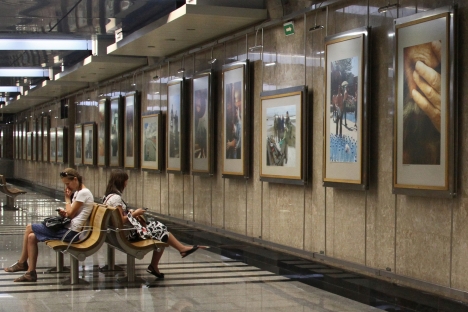 An exhibition entitled “Two Christianizations of Russia,” about the contemporary life of Russian Orthodoxy, has opened in the Moscow metro gallery.

The metro photo gallery, which has been operating at the Vystavochnaya metro station since 2005, could rival some of the main exhibition halls in terms of number of potential visitors.

The station is located on the lower floor of the Moscow-City international business center, next to the Expocenter exhibition complex that is always bustling with life. Travelers can spend the eight minutes waiting for the train by looking at photos.

View the gallery: Life of Orthodox Church from Kiev to Vladivostok

Thirty works created over the last 25 years describe the life of the Russian Orthodox Church—from Yakutia to the Antarctic, from Kiev to Vladivostok.

They show the charitable life of the church, and portraits of senior clerics, priests and parishioners.

The exhibition has been organized by the Orthodox magazine Foma, the Synodal Information Department of the Russian Orthodox Church, and the Moscow metro.

The 1,000th anniversary of the Christianization of Rus in June 1988 was the first church celebration also to be marked by the state in all the decades of Soviet rule. This was a turning point in the relationship between church and state, as well as in the understanding of the church’s significance and place in the history of Russia.

Christianization of Rus - the introduction of Christianity as state religion in Kievan Rus. Traditionally, the event can be dated back to 988 and is considered the beginning of the official history of the Russian Church.

Kievan prince Vladimir Svyatoslavich (the Great) was christened by the Church of Constantinople. The unity of faith with the religions of the ancient countries of Europe made the ancient Russian state part of world Christian society, bringing together Russia and Byzantium.

The Christianization of the peoples of the future Russian Empire was the long process that took place over the next nine centuries.

The same year saw a meeting between Mikhail Gorbachev and Patriarch Pimen, at which it was noted that the start of perestroika had made the church’s involvement in the life of society possible and desirable.

The works of Roman Yarovitsyn show the moment when the relics of Seraphim of Sarov—one of the most venerated of Russia’s saints, an ascetic and stylite—were met at the Diveyevo convent. The finding of St. Seraphim’s relics symbolically reflects the history of the Russian Orthodox Church during the existence of the Soviet Union.

The convent founded by Seraphim of Sarov was dissolved in the 1920s, and its church was destroyed. The nuns preserved a few sacred objects, but the relics of St. Seraphim were only found in 1991, in a storeroom at the Museum of the History of Religion and Atheism in St. Petersburg. The relics were returned to the church, taken to Moscow and installed for veneration in the Cathedral of the Epiphany, where, for several months, they were visited constantly by Orthodox believers.

The relics were then taken on a month-long journey from Moscow to Diveyevo (formerly known as Sarov). During the journey, Patriarch Alexy II conducted special services and sacraments in towns and monasteries. The relics were returned to the Diveyevo convent, amid a huge gathering of people on St. Seraphim’s day, August 1, 1991.

View the gallery: The saved in Diveyevo: "Apocalypse? Not now!"

It was from this moment that interest in Orthodoxy and the Orthodox Church began to grow. Churches and church parishes began to be restored.

At a time when the Soviet state was collapsing, the opportunity to receive spiritual help and comfort in the church, as well as the link with a thousand years of tradition, gave people hope that all aspects of life could be improved and normalized.

A photo from the archive of Petr Zadirov shows the Church of the Holy Trinity in the Antarctic, on Waterloo Island—the southernmost Orthodox church in the world. It was designed by means of an architectural competition and then built from Siberian cedar in the Altai region. It was left for a year to settle in Altai, before it was taken apart log by log, transported to the Antarctic and reassembled in 2004.

Maxim Vorobyov captured the Velikoretsky Procession—one of the Orthodox traditions that were restored in the 2000s. Believers carrying the icon of St. Nicholas the Miracle-Worker walk 93 miles on foot, with their children in their arms, from Vyatka, where the church containing the miraculous icon of St. Nicholas (lost in 1924 when the church was destroyed) was located, to the village of Velikoretskoye. The pilgrims sleep at night in the fields and eat food cooked on fires. In 2010, the number of pilgrims was in excess of 32,000.

A collection of photos taken by Vladimir Yeshtokin, a photojournalist with Foma magazine, depict contemporary church life: a sister of mercy at a children’s home and the distribution of aid collected by the church for Krymsk, which suffered from flooding in the summer of 2012.

Sergei Teterin captured a service in a church that is attached to a home for deaf and blind children in Sergiev Posad. Father Dmitry Lukyanov holds a service on the shore of the Arctic Ocean. There are smiling children on a frosty day against the background of a church in Yakutia (photo by Sergei Klimtsov).

There is also the return of a blessed cross from Solovki to the site of the Butovo firing range, where victims of Stalin’s repressions—including priests—were shot and buried in mass graves (photo by Sergei Gubachev).

Of course, none of the scandalous stories associated with the Russian Orthodox Church in recent years is represented here. Still, the exhibition does not appear as biased or overly backed by the state.

The exhibition balances official reporting with artistic works, ethnographic sketches and archive photos. Through these portraits, visitors meet living people who are living the life of the spirit.

The “Two Christianizations of Russia” exhibition is open through Sept. 10, during the Moscow metro’s regular hours of operation at the Vystavochnaya metro station (blue line).